Cecchinato appeared to be cruising as he built a two-set lead with Djokovic battling neck pain. Djokovic, a 12-times major winner, fought back in typical fashion to win the third set but his determined opponent was not done. 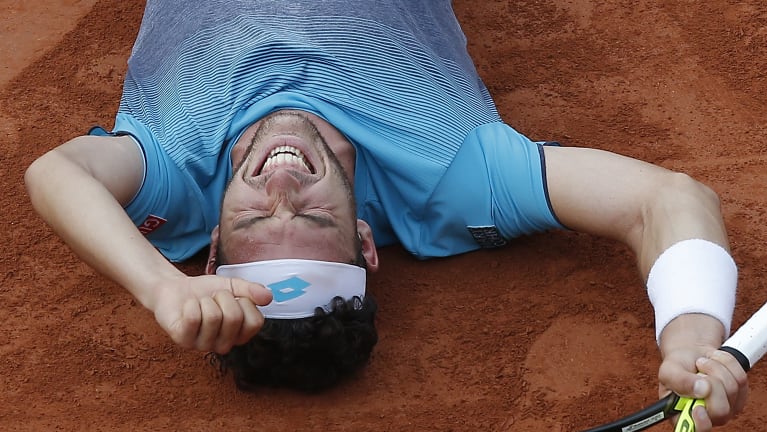 Cecchinato held his nerve in a tight fourth set tiebreak to claim a famous victory on his fourth match point. Up next for Cecchinato is Dominic Thiem.

Keys, who lost to Stephens in the U.S. Open final at Flushing Meadows last year, rallied from a break down in the opening set to beat Kazakhstan's Yulia Putintseva 7-6(5) 6-4.

Highlights from day 10 of the French Open tennis championships on Tuesday (times GMT):

"Maybe I'm sleeping. I don't understand nothing… it's unbelievable for me," Cecchinato said. "For me, to beat Djokovic in a quarter-final at Roland Garros… it's amazing."

Up next for Cecchinato is seventh seed Dominic Thiem.

Novak Djokovic clawed his way back into the quarter-final match against Marco Cecchinato, winning the third set 6-1. However, the number 20 seed immediately called the physio on to the court to treat a leg injury.

Novak Djokovic found himself two sets down against Marco Cecchinato, losing the second set 7-6(4) in a tiebreak. The Serbian, however, appeared less weighed down by the effects of a neck problem that troubled him earlier in the last eight match.

U.S. Open champion Sloane Stephens powered past Daria Kasatkina in the second set to win the match 6-3 6-1 and set up a semi-final match against fellow American Madison Keys.

The duo contested the title at Flushing Meadows last year, a match that Stephens won for her first Grand Slam victory. "It's great for American tennis and I'm really excited to play my really good friend," Stephens said.

Sloane Stephens hit 10 winners and converted two break points to take the first set of her last eight clash against Daria Kasatkina 6-3. This is the third meeting between the pair with both players winning once.

1431 DJOKOVIC OFF TO POOR START

Novak Djokovic lost the opening set of his quarter-final against Italian Marco Cecchinato 6-3, with the 12-times major winner appearing to struggle with a neck problem midway through the contest. Djokovic is bidding to reach his 32nd Grand Slam semi-final.

Dominic Thiem won the third set to complete a comfortable 6-4 6-2 6-1 victory over an ailing number two seed Alexander Zverev and moved into the semi-finals at Roland Garros for the third straight year.

Zverev, who sported heavy strapping on his left thigh after the second set, struggled to move on court. Although the German found his range with some big baseline winners, Thiem held firm to advance.

"It was tough for him today, he's one of the fittest guys on tour," Thiem said. "It's tough to play three five-setters in a row. I hope that we have many more encounters against each other at this stage or even later in a Grand Slam."

Madison Keys closed out the second set in style to seal a 7-6(5) 6-4 victory over Yulia Putintseva and move into the French Open semi-finals for the first time in her career.

"I definitely needed you guys today, you helped me get through," Keys told the crowd on Court Suzanne Lenglen. "I'm very happy to win in straight sets."

Austrian Dominic Thiem doubled his lead against Alexander Zverev, winning the second set 6-2 with a near flawless performance. Zverev has won his last three matches at Roland Garros in five sets and the German has another huge challenge ahead of him if he is to progress.

American Madison Keys fired 18 winners but also had 13 unforced errors as she won the opening set of her last eight clash against Kazakhstan's Yulia Putintseva 7-6(5).

Dominic Thiem claimed the opening set of his quarter-final match against Alexander Zverev 6-4. The seventh-seeded Austrian broke Zverev for a 4-3 lead with a perfectly executed single-handed backhand and closed out the set two games later.