VALENCIENNES, France — Barbara Bonansea is used to the gentle teasing from her teammates: How can someone so tall, they ask her, be so bad at heading the ball?

On Sunday afternoon, Bonansea surprised everyone — her teammates, the defenders around her, herself — by popping up, putting her head to a swerving free kick in the waning moments of injury time, and heading in the goal that gave Italy a 2-1 win over Australia at the Stade du Hainaut in Valenciennes, France.

It was Italy’s first Women’s World Cup game in 20 years, and the unlikely goal — Bonansea’s second of the afternoon — provided an emotional, unexpected bookend.

“I’m tall, but when I jump, I close my body and my eyes,” Bonansea said, laughing, moments after stepping off the field. “Today, I looked at the ball,” she added, pointing to her eyes and furrowing her brow, “and: goal.”

Coming after 94 minutes, 39 seconds of play, it was the latest goal ever scored in regulation time of a Women’s World Cup game.

The game itself was a long time coming, too. Italy last qualified for the World Cup in 1999. In the years that followed, women’s soccer languished in the country, growing only in fits and starts amid widespread national disinterest.

That process of growth has accelerated of late. More of the country’s big clubs are investing in women’s programs — Juventus and Fiorentina already have them, and Milan and Internazionale have recently created their own — and as the national team has produced positive results, the national news media has taken notice. The national team won seven of its eight games in qualifying, winning its group and allowing only four goals.

“It’s a magical moment in Italy for women’s football,” defender Sara Gama, the Italy captain, said of Sunday’s victory. “There’s huge attention. We were in the first page of every newspaper. It’s something amazing. We’re living our dream now.” 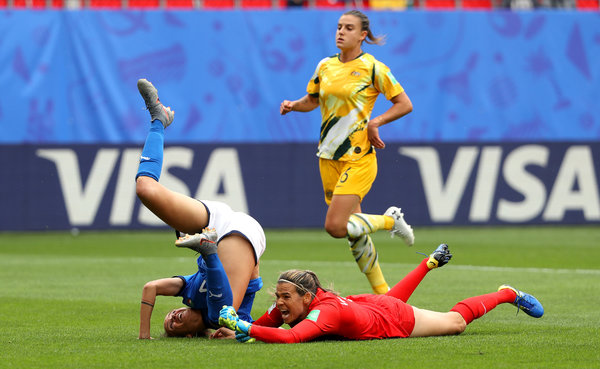 Bonansea, 27, scored her first goal opportunistically, after stealing the ball off of the foot of defender Clare Polkinghorne early in the second half. Her heroics spoiled a strong performance for Sam Kerr, one of the most prolific goal scorers in women’s soccer, who had given Australia the lead with a penalty kick in the first half.

Kerr, who is 25 but is already appearing at her third World Cup, had never scored before in the tournament.

“The monkey’s off my back for me,” she said.

Kerr was also the closest Australian player to the ball on the decisive set piece in injury time, but she couldn’t do enough to get in Bonansea’s way.

“It just went over my head,” Kerr said of the cross. “I was backpedaling, and it’s always harder to head the ball when you’re backpedaling. I didn’t know there was a player behind me.”

Audiences can be fickle. Fandom is solidified through bursts of emotion. Such a win, Bertolini said, would create “more loyalty” in Italy for its female players.

The Italian players wore their emotions on their sleeves. They piled on top of Bonansea after her second goal, and they lifted her in the air after the final whistle.

“We were surprised a lot because, Barbara, it’s not usual for her to score with her head,” forward Cristiana Girelli said, laughing. “We were like: ‘Oh my God. What did you just do?’”

Chrstiane’s goal in the 64th minute for the hat trick came on a free kick that curled just under the crossbar. She also scored in the 15th and 50th minutes for the Brazilians, who were playing without their star Marta: the six-time women’s world player of the year was ruled out of the match because of a left thigh injury.

It is Brazil’s first hat trick in a World Cup since 1999. Cristiane is the ninth player overall to score 10 career World Cup goals; Marta holds the record with 15.

Jamaica is the first Caribbean nation to play in the Women’s World Cup. (AP)