MILWAUKEE — When the Nets settled into their hotel in the city’s Historic Third Ward last week, their 2-0 series cushion against the hometown Bucks looked especially cushy. A lead that reached as high as 49 points in the Nets’ Game 2 rout — without the injured James Harden — seemingly had the entire N.B.A. discouraged.

By the time the Nets flew back home on Sunday night, after a second consecutive road defeat and the loss of another superstar, they were abruptly forced to contemplate the possibility that fielding a full-strength team is a luxury this season might never afford, no matter how lavishly the roster reads.

Kyrie Irving’s right foot bent sharply in Sunday’s second quarter after he converted a layup and came down on Giannis Antetokounmpo’s right foot after Antetokounmpo had positioned himself for a rebound but left little landing space. Irving was soon ruled out for the rest of the game with a sprained right ankle, leaving Kevin Durant and his limited supporting cast to try to stay with the emboldened Bucks, while Harden stood throughout the game to shout instructions from the bench in street clothes. 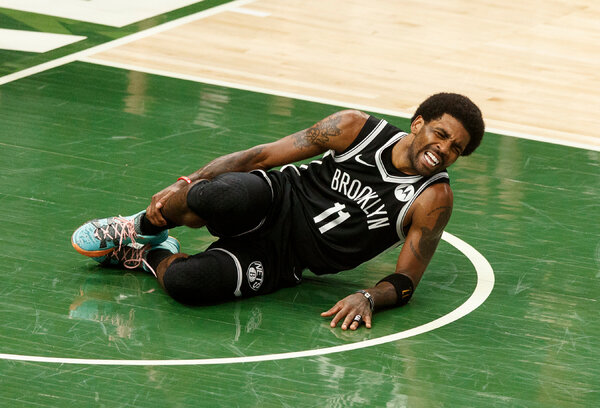 Milwaukee predictably pulled away for a 107-96 Game 4 victory that evened this best-of-seven, second-round series at two games apiece and that, because of the uncertainty of Irving’s status, erased any notion of comfort that the Nets once felt. Irving left Fiserv Forum on crutches and with his right foot in a walking boot after X-rays were negative, according to a person briefed on Irving’s status but unauthorized to discuss it publicly.

“It was a big adjustment tonight to play without him and James,” Nets Coach Steve Nash said, referring to Irving and Harden. “But we’ve had that type of year.”

Even by the standards of this injury-laden Nets season, in which Durant, Irving and Harden have scarcely been able to play together since Harden arrived in a four-team trade in mid-January, Sunday afternoon’s events had the jarring feel of a new low. That was the unavoidable takeaway without even factoring in the fire alarm after the final buzzer that forced all arena occupants, including both teams, to be evacuated for what the Bucks termed “precautionary reasons.”

The Nets’ original aim for this Milwaukee trip was to win at least one game and set up Game 5 on Tuesday night at Barclays Center in Brooklyn as a closeout opportunity, enabling Harden to essentially take the series off after aggravating a right hamstring injury in the opening minute of Game 1. With the series now tied, in what was billed in many corners as a matchup that could well produce the N.B.A.’s next champion, Nash found himself fielding questions about the urge to restore Harden to the lineup on Tuesday.

“I think it’s an independent case,” Nash said, swatting down the idea that Irving’s prognosis would influence Harden’s timetable. “I don’t want James to be rushed back.”

The other factor, beyond Irving’s setback, that prompted such questions: Milwaukee had begun to cause problems even before Irving’s exit and looked a lot more like the team that swept the Miami Heat in the first round. Antetokounmpo had the standout box-score line with 34 points and 12 rebounds, but P.J. Tucker was the Bucks’ unquestioned spark, easing the pressure (at least temporarily) on the Bucks’ under-fire coach, Mike Budenholzer. After scoring just 9 points in the first three games of the series, Tucker sank three 3-pointers from the corner, his well-chronicled favorite spot, and finished with 13 points and 7 rebounds.

He might have been even more effective at the other end, imposing his physicality on Durant in precisely the manner the Bucks envisioned when they acquired him from Houston in a March trade. Durant led the Nets with 28 points and 13 rebounds but needed 25 shots to reach his scoring total. When Tucker was the primary defender, Durant shot 3 for 12.

“We’re very happy, but we’ve got to keep getting better, keep playing together and hopefully we can go into Brooklyn and take one,” Antetokounmpo said.

During a verbal confrontation between Tucker and Durant in Milwaukee’s narrow Game 3 victory, Antjuan Lambert, a personal security guard for Durant who was hired by the Nets when they signed him, came onto the court and shoved Tucker. The Nets were notified on Saturday that Lambert had been barred by the league office from any further on-court involvement in the series.

Sunday actually brought a positive start for the Nets, with Jeff Green being cleared to make his series debut after missing the first three games with a left plantar fascia strain. Green immediately drew a charge upon entering the game late in the first quarter, putting Antetokounmpo in early foul trouble, but the Nets’ hopeful vibe was soon doused by the sight of Irving hobbling to the locker room after he spent several minutes on the floor recovering from the painful landing.

When the Nets finally surrendered in the fourth quarter, pulling Durant with 4 minutes 28 seconds remaining and the hosts leading by 99-84, Milwaukee’s crowd, which included the Wisconsin native J.J. Watt of the Arizona Cardinals, broke into a “Bucks in six” chant.

You’d have struggled to find anyone, with or without local ties, who believed that outcome would be possible after Milwaukee’s humbling 125-86 defeat at Barclays Center last Monday in Game 2. In these playoffs, though, injuries continue to wield the largest influence. Health woes for star players were unrelenting throughout the second half of a harried regular season conducted in pandemic conditions — and remain so.

Remember the warning we got from Philadelphia 76ers Coach Doc Rivers at the start of the second round?

“It’s going to be the battle of the fittest by the end of this thing,” Rivers said, unsure at the time how well his star center, Joel Embiid, could play through a slight meniscus tear in his right knee during a second-round series against Atlanta.

Embiid, for now, is thriving. For the Nets and especially Durant? Suddenly nothing is slight about their predicament.