James McDonald has hit the ground running on his return to Saturday race riding, collecting a winning double at Rosehill and showing he has lost none of his saddle smarts during an 18-month ban.

His first Saturday winner since 2016 was aboard Matthew Dunn's Dia De Reyes in the class 2 Highway Handicap, before he piloted I Am Serious to a dominant win for Chris Waller in the race named in the trainer's honour after his Australian Racing Hall Of Fame Induction this week. 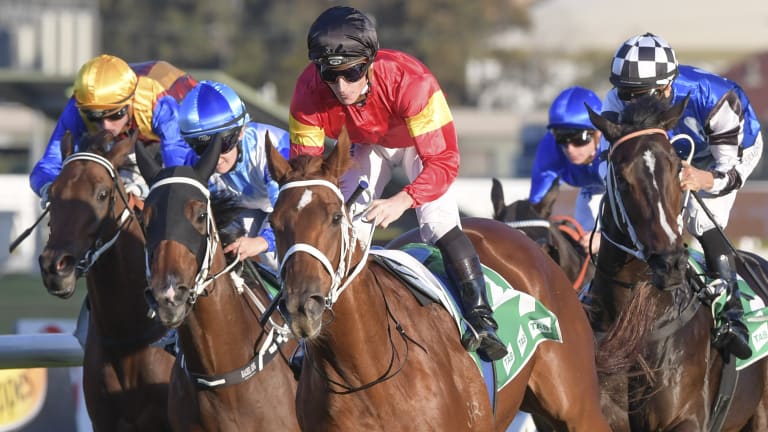 No joking: James McDonald pilots I Am Serious to victory as part of a winning double at Rosehill.

Saturday's success at Rosehill for McDonald followed two wins at Warwick Farm on Wednesday, including in his first ride back after serving a suspension for profiting from a bet placed on his behalf in 2015.

He was also successful aboard  Tonsor at Kembla Grange on Thursday.

I Am Serious was arguably the most impressive of his five winners.

Less than half an hour after Waller won the Doomben Cup with Comin' Through, the New Zealand-born McDonald ensured his countryman had a Sydney winner to cheer about as well by guiding  I Am Serious ($3.50) to a  two-length  win over La Chica Bella ($10) and  Princess Posh ($6.50).

"He's taken it all before him and I'm sure there's more to come," McDonald said of the Hall Of Fame trainer.

"She's a beautiful mare. She put in a poor performance last start, but she's bounced back in really good order. She's definitely better than that, that's for sure. She can progress to stakes grade any time soon.

"It's been hard to circumnavigate and come down the middle.  There hasn't been many horses do it.  That's probably added a bit more to her performance.  She's definitely a mare going places."

The spoils were shared on a sunny day at Rosehill, with McDonald the only jockey to enjoy multiple successes.

Tim Martin's King Darci ($16) produced the upset of the afternoon, staving off the well-backed Special Missile ($3) in the Australian Hall Of Fame Benchmark 95 Handicap (1500m) when the latter looked to have saluted in a bobbing finish.

A photo finish showed King Darci had held on down the inside after leading most of the race.

"He's very tough, he's hard to get past," Martin said.

"When he leads he's good, and the track's quite leaderish. I told Adam [Hyeronimus] to press on from the gates and try and find the front, come out humming and see how you go."

Hyeronimus heeded the advice to a tee, leading the field and then switching the whip to his right hand inside the final 100m to get the most out of the horse.

"I wanted to be really positive today," Hyeronimus said. "He took quite a bit of riding early but once I got there I controlled the race from then onwards, and I knew that he'd keep fighting.

"I was quite surprised when the other horse headed me, but once I changed hands with the whip and got stuck into him with the right hand he won good. I'm not sure what the plans are, but I'm sure he'll go to a similar race like this again.

"It's been a bit of a quiet year for us this year – a few of the horses that we thought were going to go onto nice races just didn't quite deliver.

"It's good to be able to get back on Darci today and get the job done."