A serious knee injury to five-eighth Lachlan Croker suffered in Friday's 18-12 loss to Newcastle could force Manly coach Trent Barrett to recall banished Jackson Hastings for next weekend's clash against his old club the Sydney Roosters.

Croker, who has already undergone two knee reconstructions in his fledgling career, went down 31 minutes into the game with a suspected left ACL injury after a strong first half as the Sea Eagles' injury crisis lurched from terrible to almost catastrophic in the club's fourth straight loss. 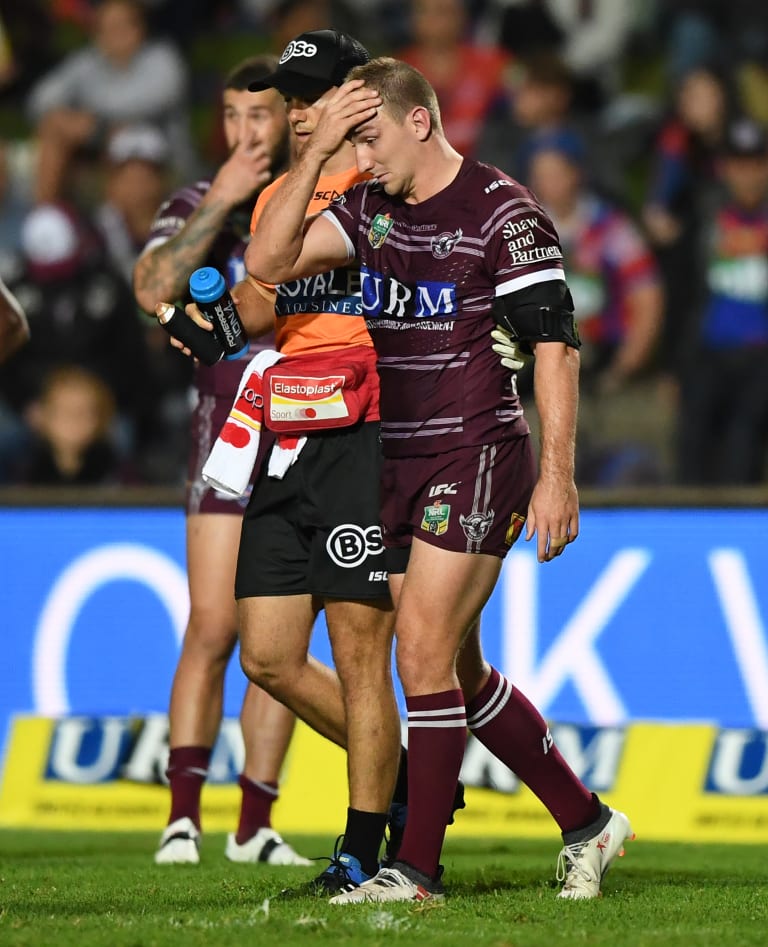 And as much as Barrett would prefer not to reunite Hastings with Daly Cherry-Evans less than a month after the pair's heated argument following an unsanctioned night out, he has been left with almost no choice.

The alternatives include promoting Joey Lussick from the reserves, a man with just one NRL game under his belt, or shifting an already depleted back line by moving Dylan Walker into No.6 and promoting Lewis Brown to the starting side.

But that weakens them out wide, given Brad Parker (knee) and Jorge Taufua (collarbone) are both recovering from injuries.

From an on-field perspective, Hastings is the most logical option and clearly the best choice as Manly look to arrest their horrific run of form.

While Barrett could do without the selection headache, the last thing he needed was to watch the Knights land their first win at this venue since 2006.

Most of the 5715 fans at Lottoland left the ground disgruntled after Nathan Ross scored with only five minutes left on the clock to shrug off the long-term loss of Mitchell Pearce last week and surge to sixth on the ladder.

Kalyn Ponga stepped up in Pearce's absence, constantly prodding and probing the Sea Eagles' defence, and provided the final pass that allowed Ross to score the match-winner.

At 10-10 with 15 minutes to go the teams traded penalty goals and Manly failed to take advantage of excellent field position late on which allowed Newcastle to finish the best.

It wasn't the prettiest match up on paper, the embattled Sea Eagles up against the Pearce-less Knights, but it looked the right game for Barrett's side to move on from a horror few weeks.

Cherry-Evans has spoken in recent times about the importance of playing good football in response to his $10,000 club-imposed fine for his misdemeanours during that infamous night out in Gladstone.

Friday wasn't his night in trying circumstances, although he did lay on a second-half try for Shaun Lane.

Martin Taupau ran for a staggering 247m as he did everything he could to deliver Manly the win they so desperately need, but there simply weren't enough contributors across the park.

There were more four-pointers denied than awarded in the first half with the video referee ruling no try on three occasions.