Jacob deGrom Gives Up 6 Runs, and a Piece of History, Against the Twins

The Twins were prepared to use any means necessary on Tuesday to get on base against Jacob deGrom, the Mets starting pitcher who had not allowed a run in 26 consecutive innings going back to last season.

Shortstop Jorge Polanco exemplified the approach when he bunted for a base hit in the first inning, but his teammates were soon delivering full swings against deGrom as well. Those worked even better as Minnesota knocked out deGrom after four innings in the Twins’ eventual 14-8 victory at Citi Field.

“We found out he’s human, finally,” Mets Manager Mickey Callaway said. “I didn’t think he was for a while.”

The Mets’ ace was wild, and Minnesota didn’t miss his mistakes. If it wasn’t catcher Mitch Garver homering in back-to-back innings, it was Polanco driving a four-seam fastball for a triple and then scoring when deGrom threw a wild pitch.

“I just couldn’t locate anything,” deGrom said. “I was all over the place. Slider wasn’t even a factor tonight.”

DeGrom’s loss snapped his streak of quality starts at 26, leaving him tied with Bob Gibson for the longest in major league history. He was aware of the potential for history after seeing the record posted on the videoboard in center field during his warm-ups. He surrendered six earned runs and eight hits.

When asked afterward whether he could still appreciate how rare his run was, deGrom said, “Maybe in a few days. I’m not real happy with how tonight went.” 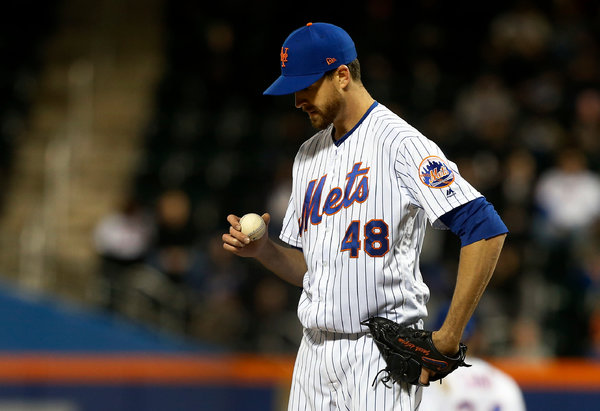 It was deGrom’s worst outing since Sept. 5, 2017, when he was charged with six earned runs in a loss to the Phillies, and it came five days after he struck out 14 batters in a dominant win over the Marlins.

The Twins won despite the Mets’ having plenty of offensive highlights. Michael Conforto hit a home run for the third game in a row, Pete Alonso homered twice, and Brandon Nimmo broke out of his early-season slump by going 2 for 4 with a home run and a double.

With the Mets’ lineup doing its part to put runs on the board, it was a role reversal for deGrom, who posted a 10-9 record despite his 1.70 earned run average last season thanks to the Mets’ struggles at the plate. He had not allowed more than three runs in any of his previous 31 starts.

In all, Minnesota had 17 hits.

DeGrom’s pitch count rose quickly. He threw 15 pitches in the first inning and 31 in the second, and he was up to 76 after the third. While he struck out the first batter of the game, he recorded just two more the rest of the way. He had previously become the first Met starter in team history to post double-digit strikeouts in his first two starts of the season.

A bright spot for the Mets, even in a loss, came when catcher Travis d’Arnaud, who said his arm felt better than ever, threw out Max Kepler as he tried to steal second base in the fourth inning.

“Had a couple of good throws,” d’Arnaud said. “I would have rather won the game, though.”

Instead, the game belonged to Minnesota from start to finish, even as the Mets rallied for four runs in the ninth inning. Polanco had punctuated his night in the eighth with a two-run homer off reliever Robert Gsellman that provided more than enough insurance.

From his bunt to his homer and everything in between, it was all Minnesota on a night that had begun with deGrom chasing history.

“I’ve been through it before, and hopefully I’m around long enough to have a couple more,” deGrom said. “I know there are a lot of good pitchers who have had days like this.”