Left-arm spinner Ravindra Jadeja led India's brilliant bowling performance in a lopsided nine-wicket win against the West Indies to wrap up a 3-1 series victory in the final one-day international as their tour of Australia looms large on the horizon.

Jadeja, who turns 30 next month, picked up 4-34 as the West Indies' batting line-up capitulated for just 104 inside 32 overs after captain Jason Holder won the toss and opted to bat at Thiruvananthapuram. 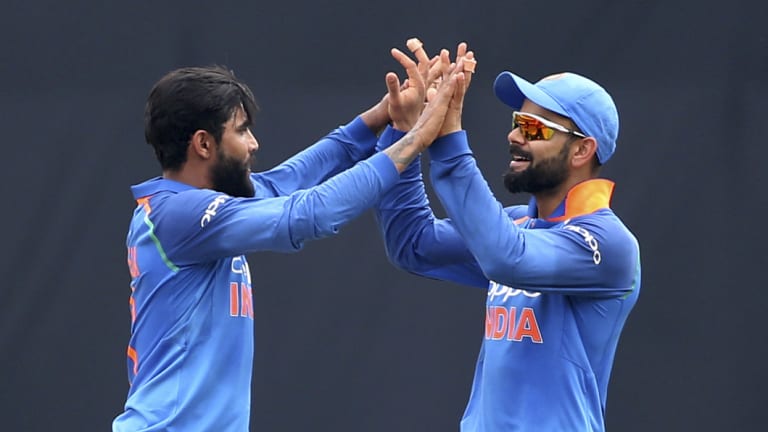 Rohit Sharma made 63 not out while India captain Virat Kohli remained unbeaten on 33 as the hosts chased down their target in less than 15 overs, having lost Shikhar Dhawan early.

West Indies had made two changes coming into the must-win tussle, with leg-spinner Devendra Bishoo replacing injured off-spinner Ashley Nurse, who was also ruled out of the T20 series between the sides with a pectoral injury.

The tourists also included an extra fast bowler in Oshane Thomas, who took the place of opening batsman Chandrapaul Hemraj.

India opener Dhawan's run of poor scores continued as he chopped on a delivery from Thomas to be out for four, going through the five-match series without a half-century.

Any semblance of hope West Indies had was over when Holder allowed an edge from Kohli to burst through his hands at first slip when the batsman, who scored three consecutive centuries in the series, had made only four.

Rohit was caught off a Thomas no ball when on 18 and the Indian pair made the most of their reprieves once they had negotiated the early pace barrage.

Taking the attack to the visitors, Rohit pulled Thomas for a four to show his intent and then launched the bowler for a straight six in his next over.

He hit three more sixes and five fours in his 56-ball innings to bring up his 37th ODI half-century after scoring 162 in the previous match in Mumbai. Kohli also dealt largely in boundaries, hitting six fours in his 29-ball knock.

West Indies' batting again suffered a meltdown after their below-par performance in Mumbai, when they were bundled out for 153.

The touring side never recovered from the early jolts with only three batsmen managing to make double figures against a relentless Indian attack.