They say imitation is the sincerest form of flattery and on Thursday night Jahrome Hughes pulled off a Billy Slater impression to make the Melbourne Storm fullback proud.

With Slater and the other Melbourne stars away on State of Origin duty, Hughes played the fullback role to a tee in a man-of-the-match display, scoring a try, setting one up and chalking up 209 all-run metres as the Storm beat St George-Illawarra Dragons 52-30 at AAMI Park.

It was not a characteristic Storm win as their celebrated defence never took hold, but in the place of defence a more daring attack dominated as Hughes, young halfback Brodie Croft and five-eighth Ryley Jacks all took on the line with excellent results.

Hughes scored what proved to be the knockout try after the Dragons had hung with the young Storm side as his 66th-minute effort gave the home side the lead for the last time. 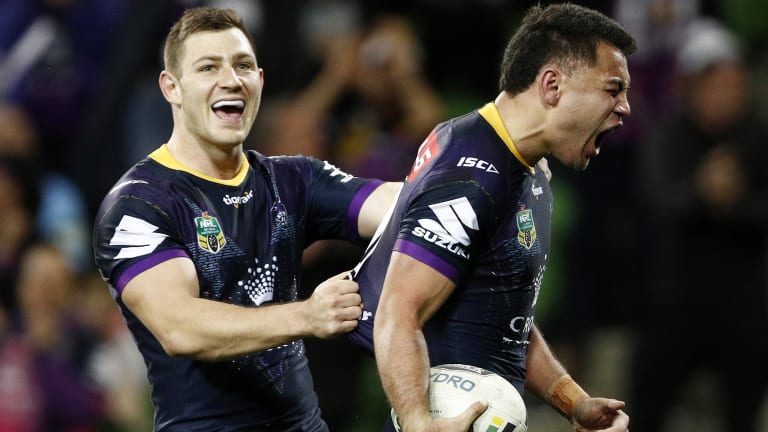 Jahrome Hughes (right) with Ryley Jacks after scoring a try on Thursday night.

On that play Hughes ran an inside line off Croft, who perfectly timed his short pass before Hughes sprinted over to score – it was a running line that looked similar to some of Slater’s best work.

“I’ve been watching Billy since I was a young kid and I still pinch myself that I get to play with him every week and have played a couple of games with him,” Hughes said.

“When you are young and watching people like that I guess you do tend to put some of their things into your game and I think that’s what happened today.”

The Storm’s defence was a shadow of its usual self due to making so many changes to the starting side but Hughes said the team had to be better next week regardless of how well the attack was going.

Hughes had to work his away back into the side after injuries and the return of veterans such as Slater meant he spent the first part of the season in the Queensland Cup but captain Cameron Smith said Hughes was one of the side’s form players.

“Since he has come into the first-grade side, he has been outstanding,” Smith said.

“He played in the halves last week, he played at fullback while Bill had a hamstring injury or away with Origin – I reckon over the last six weeks he has been one of our best and most consistent players, to be honest.

“He has a got a big future ahead of him.”

Hughes said he didn’t care what position he played as he was purely striving to remain in the first-grade side.

Storm coach Craig Bellamy will have a difficult decision this week should all six of his State of Origin players return fit for next Saturday’s clash with Manly and may again move Hughes into the halves.

“It’s been good, mate, and when I fill in, I’m just happy to be in the team,” Hughes said.

“It’s is pretty tough filling in but I love it and I’m making the most of it.

“We usually get an early call saying we might be in this position or that position and there is not much between the half and fullback apart, from a bit of kicking.

“The coaches give me all the tools I need to make it easy, it makes it easy with them behind me and playing with Cameron Smith as well.”

With State of Origin game three next Wednesday, the Storm won’t know their team until later in the week but Bellamy admits he will face some tough decisions on his selections with the likes of Hughes, Jacks and Croft are all performing like they did on Thursday night.

“All the guys who have played halfback this year played tonight and you would like to be able to pick them all next week,” Bellamy said.

“But we can’t do that unless Cameron Munster doesn’t play after Origin – they have done a tremendous job, those three.

“From what I saw their communication was really good and that wasn’t one of our strengths last week and they all ran the ball well.”

The Storm play the Manly Sea Eagles in Sydney next Saturday.