Melbourne City will go into their season-defining semi-final clash with the Newcastle Jets on Friday night without captain Michael Jakobsen – the third week in a row the Danish defender has been an absentee.

City lost their first match without him – a 2-1 defeat by Wellington in the last round of the home-and-away season  – but easily saw off Brisbane Roar in the first elimination-final in front of their own fans last Friday.

On both occasions Osama Malik – also returning from injury – came into the starting 11. He is expected to retain his place in what is likely to be an unchanged line-up.

''He’ll not be travelling. It's frustrating, disappointing for us and frustrating for the lad, he’s had such a good season. He's played nearly every minute of every game and he’s been asked to play several different positions and sacrificed himself for the team throughout the season,'' City coach Warren Joyce said. 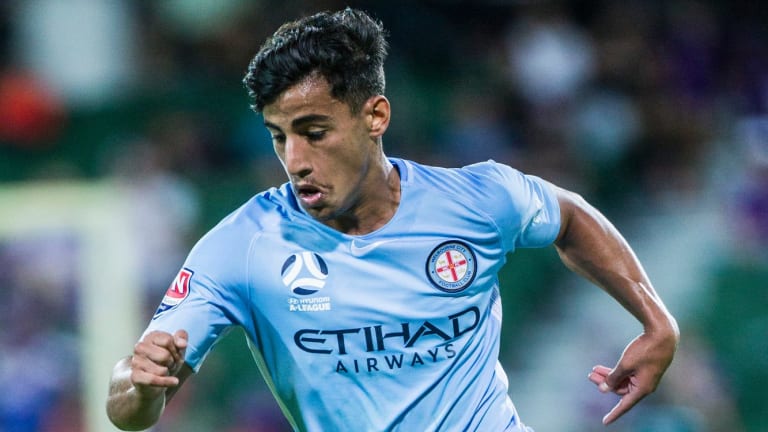 City’s Daniel Arzani has generated huge excitement since breaking into the side.

Even if City do make it past the Jets, Jakobsen would struggle to be involved in a grand final.''He’s not fit for this week and that’s all you can look at at the minute," Joyce said. "He tried earlier in the week. We decided then he’s tried this a couple of times and now he’s got to get it right. He wasn’t right at the start of the week and that was it.

''There’s one or two other bits of bangs and bruises that [other] people have picked up in training. Little knocks. It’s competitive, our training sessions.''

Those knocks, however, are not likely to keep anyone else out of a match in which City could make history.

Never has the team from Bundoora made it to the championship decider, and it would be a huge feather in Joyce's cap if he could guide City to the title game in his first season.

City have already beaten the Jets twice on their own turf this season. They have set a few records too, including ending the regular season in their highest ever position, third.

Joyce has worked hard over the campaign to find the right blend, and there has been a number of personnel changes. If City go all the way it will be because of the depth of the squad, Joyce said.

''If you look at the start of the season when we didn’t play particularly great football and you look back now, it’s a good job we got four wins," he said. "So people like Fitzy [Nick Fitzgerald] and Bruce [Kamau] and Manny [Muscat] have contributed greatly to that early effort and endeavour. They’re still playing a part now.

''Harrison Delbridge has come in part way through, which is never easy. Then he has had to get his fitness. He has come as a left-sided centre-half but he has played right-back, right of a three. He's never played in his preferred position but he has never moaned about it, he has just gone on with it.''

One player who has generated huge excitement since breaking into the side is teenage winger Daniel Arzani.

Joyce said those who criticised him for a lack of stamina and being unable to run out games because he was often substituted did not understand the context of his contributions.

''It's immaterial whether he goes the distance, he's doing the full demands of the job for whatever minutes it takes," he said.

''Sometimes you look at him and think 'he's come off, he's not done the distance', but actually his high-speed running has been phenomenal, far greater than anyone else on the pitch, and probably anybody else in the league. You look at him and maybe not really appreciate it.

''He has broken his own records continually this year, and broken probably the high-speed records of a lot of the wide players in the league.

''He has progressed a hell of a lot. He has gone through the roof with his stats continually this year.''