When James Paxton takes the mound at Yankee Stadium on Tuesday, he will be at the center of one of baseball’s hottest rivalries. The crowd will be electric, the atmosphere charged if not primal. And in the Boston Red Sox, Paxton will not just be facing the Yankees’ archenemies, but the defending world champions.

It’s a lot to ask of any pitcher, but for Paxton, who has been struggling with mechanical and confidence issues, there will be an extra degree of difficulty.

After spending the first six years of his career with the Seattle Mariners, Paxton is off to a lackluster start with the Yankees: 1-2 with a 6.00 E.R.A., including an especially rough outing against the Houston Astros during which he allowed five runs and two home runs, and was removed in the fifth inning without recording an out. Paxton’s early exit sealed Houston’s three-game sweep of the Yankees, and was yet another reminder that a transition to the Yankees’ universe can be tougher than it looks.

Paxton admits he has been somewhat overwhelmed by the outsize expectations — his own.

“I think just getting that under control and realizing it’s the same game,” Paxton said on Sunday morning, adding: “I think I’ve been trying to do too much, trying to be better than what I am. I realized I’m good enough being who I am or who I was in Seattle.”

This is no small issue for Paxton or the Yankees. The team watched Sonny Gray, another small-market talent, pitch himself out of the Bronx in less than two full seasons as a result of his discomfort in front of a bigger, more demanding audience. But unlike Gray, who never successfully confronted those demons, Paxton is working with a sports psychologist he has retained since his minor league days.

Compounding Paxton’s confidence problems is the ease in which Houston detected his pitches last Thursday. For that, the left-hander says he has only himself to blame.

It was when he went back over his performance that he realized how obvious his tells had become. Working from the stretch position, Paxton’s raised left index finger would peek out from his glove before throwing the knuckle curve, allowing Astros runners on second base to alert hitters what was coming.

That would help explain why the Astros looked so comfortable pummeling Paxton. .

Going over video with Carlos Beltran, the former Yankee who is now a consultant for the team, helped Paxton grapple with the issue. 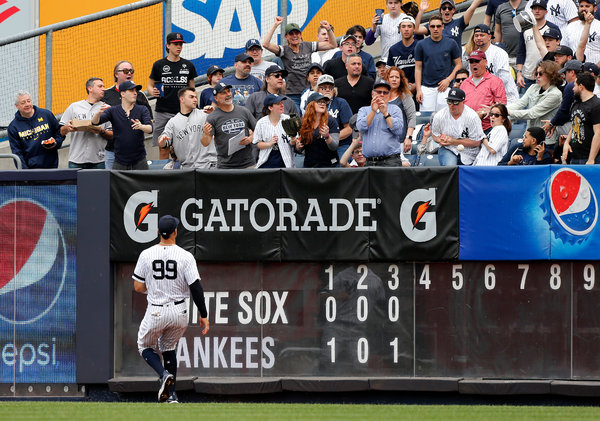 “Look at these takes. Look at that swing,” Paxton said, recalling Beltran’s words. “They wouldn’t be making these swings or takes if they didn’t know what was coming.”

The good news for the Yankees is that Paxton is already working on better camouflage. Now, as he goes into the stretch, he is waiting until the ball is deep in his glove before changing grips. But even with a battened-down delivery, Paxton still has to prove he can handle the pressure that the Boston rivalry can offer.

Granted, the Red Sox have barely resembled the 2018 version of themselves, losing 10 of their first 16 games. The team has been undermined by its pitching staff’s 5.80 E.R.A. — 13th in the American League even after David Price shone in a 4-0 win over Baltimore on Sunday. The Yankees have not fared much better. Their 5-2 loss to the Chicago White Sox on Sunday was their fifth in six games. Except for a three-game wipeout of Baltimore last weekend, the Yankees have dropped every series this season.

Masahiro Tanaka, who had brandished a 1.47 E.R.A., was ambushed by Tim Anderson’s grand slam in the fourth inning on Sunday and was subsequently knocked out in the fifth.

The loss scuttled plans for the Yankees to build momentum heading into the Red Sox series. It was Boston, after all, that on the way to winning the World Series ended the Yankees’ season in a division series last October.

“That left a bad taste in our mouths,” Luke Voit said.

It’s because of the long history of battles between the teams that even amid a sluggish April for both of them, a Yankees-Red Sox showdown can still offer plenty of excitement.

That’s one of the reasons Paxton will be scrutinized so closely. A pitcher’s worth to the Yankees has always been commensurate to his success against Boston. As a Mariner, Paxton was successful against the Red Sox, going 2-0 with a 2.79 E.R.A. But that calculus changes on Tuesday night, when every inning will feel like the postseason.

Does Paxton have the stomach for what’s around the corner?

He acknowledged the concern, saying “I’m sure I’ll be a little nervous going in, having it be my first experience being a part of this rivalry.”

Paxton will probably come in loaded up with tips and reminders from his support team: Keep the ball hidden in the glove and keep your wits about you. Breathe slow and easy. But Paxton could simply unload the baggage and adopt C. C. Sabathia’s war cry: Just bring it on.