Augusta, Georgia: Inclement weather suspended play at the Masters on Friday afternoon, with an injured Jason Day already in the clubhouse sharing the lead during the second round.

Just after 5pm local time, second round play was suspended as bad weather moved through the Augusta, Georgia area. It was a short delay. 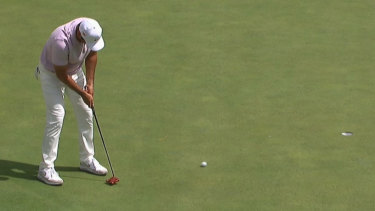 Jason Day birdies the 16th hole to move into a share of the lead during the second round of the Masters.Credit:Nine

Day's fellow Australian Adam Scott, the 2013 Masters winner, has also surged up the leaderboard to six under through 14 holes.

Scott birdied the par 5s at eight and 13, while jagging another birdie at the difficult par-3 12th.

Marc Leishman and Cameron Smith round out the Australian contingent at the April major and are both at one under early on the back nine.

Day said he had his chiropractor, Canadian Dr Stuart Love working tirelessly on his back on Thursday night and Friday morning to get Day ready to play through the injury.

It worked wonders as he appeared to be in considerably less pain while putting together a round that was nearly flawless.

It was only bad club selection at the par-3 12th, and a subsequent poor bunker shot, which resulted in a bogey.

Four-time Masters winner Tiger Woods has picked up two shots and is at three under.