On Saturday afternoon West Coast defender Jeremy McGovern will enter the centre of the universe for football fans with all eyes trained upon him.

Questions being asked about whether his sore hip pointer will survive the fury of the MCG on Grand Final day will be answered as soon as he flies for his first mark.

Will the leap be there? Will the timing be right? Can he land free of pain? Is he able to use his body to out-position his opponents?

If he's right, West Coast will be favourites to win. If he is not right, then a major obstacle standing between the Magpies and victory will disappear.

Because McGovern is the best contested mark in the game, able to stop attacking forays in their tracks, keep the ball off the ground and away from crumbers and rebound. 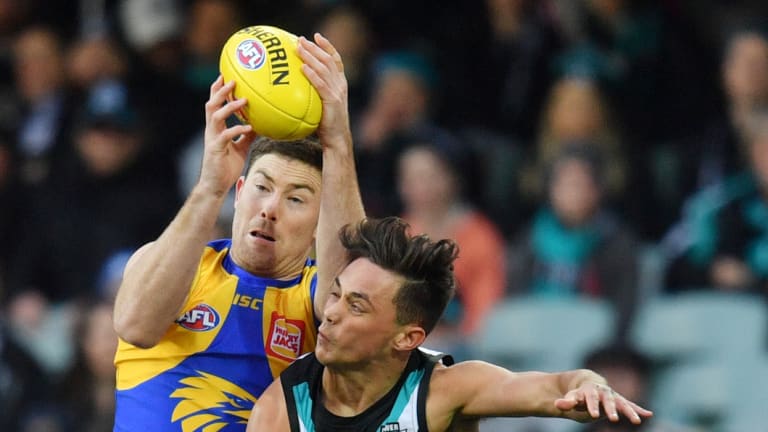 He might lumber around the ground, shoulders forward with the gait a removalist carries when lifting a heavy table on to a truck, but he defies looks as an aerial specialist, the best contested mark in the game.

McGovern honed the skill in the centre of another universe, the desert that covers about 155,000 square kilometres in the western part of the country.

As a boy, during a period he guesses to be about 2002-2005, McGovern, his brother Mitch and the rest of the family joined their dad Andrew, a former AFL player who works for the Clontarf Foundation, in Warburton in the Ngaanyatjarra Lands, just south of the Gibson Desert.

It was there that the knockabout lad obtained his formal education from the school of the air and his on-field education in the rough and tumble of local kids playing kick-to-kick.

The McGovern boys would fly for marks at all times and in all conditions.

"It was my favourite game, king of the pack," McGovern told Fairfax Media.

"That is all I used to play. I was playing that breakfast, lunch and dinner. I will play it with anyone and everyone. We used to play with little rubber footys."

McGovern's mitts aren't big and his leap isn't enormous but he knows how to reach the ball before everyone else in the AFL does and cling on, a habit he gain against opponents at Warburton that tested him every day.

"That is where we learned to play the game, up there," McGovern said.

"I don't have big hands. It is a natural thing I have been brought up with, taking the ball at the highest point, out in front and it is as simple as that."

McGovern not only loved the game but the people he met in the town and the attitude they took to their football.

"King of the pack was the Indigenous boys' bread and butter. They loved it.

"I used to run around in boots but those boys wore no shoes and [they] used to dance around you like you wouldn't believe."

McGovern's family then moved to Kalgoorlie before making their home at Albany, a place McGovern calls home, with many of his closest friends from the town and his footy club North Albany part of his history.

However he continued to refine his skill with brother Mitch, the pair ensuring the marking ability they had refined in the desert stayed with them.

"Me and my brother Mitch used to throw the pillows on the back and take hangers on each other," McGovern said.

"We would put the pillows up our shirts and then one of us would lob the footy up and the other would jump on your head.

"We still have photos from 10 years ago of us taking hangers on each other."

The question will be answered on Saturday: can the star of Warburton shine?