Finally, Bill The Bastard, the horse with a bigger heart than Phar Lap and a better weight-carrier than Bernborough, will get racecourse recognition in the Jericho Cup at Warrnambool on Sunday. 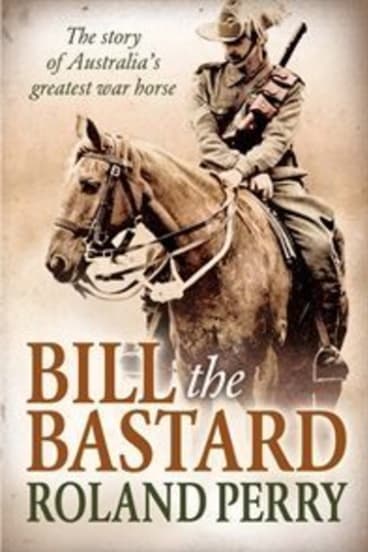 Hero: Bill The Bastard as depecited on the cover of Roland Perry’s book.

In this age of innovation against tradition, it is hard to pinpoint where the Jericho Cup sits, given it is a grind over 4600 metres for Australian and New Zealand-breds and is ridden by jumps jockeys.

In 2015, I questioned why there was not a race, possibly on Anzac Day, named after Bill The Bastard to highlight his heroics under fire in World War I. But we do have the Jericho Cup, which celebrates its 100th anniversary this year, having first been held by the Aussies near the end of   World War I to throw the Turks off the scent of an offensive. It was won by Bill The Bastard.

Certainly the capacity field tomorrow for the $300,000 prize has more character than class following a spring of financial success in Victoria, where record betting turnovers were achieved. Then came the announcement of a $5million race over 1600m in the autumn, with 10 of the 14 runners to be chosen by the public.

To be known as the All-Star Mile, the first will be held at Flemington on March 16 next year. The weight-for-age event will rotate between Melbourne’s three metropolitan clubs. It is seen as a counter to Sydney’s The Everest and threatens to make a dint in our autumn carnival events, like the Doncaster at Randwick.

The first All-Star Mile will have an impact because of the Flemington venue, which caters so well for racegoers, but I doubt whether Caulfield and Moonee Valley will have the same appeal.

The Everest is getting credit in some quarters for stimulating the interest in racing that contributed to the record betting turnover on the Caulfield Guineas program. I think not. The Caulfield program was popular because of the traditional races – the Guineas, the Caulfield Stakes, the Toorak and the Herbert Power.

While Melbourne Cup day maintained its position as Australia’s biggest wagering meeting, with turnover of more than $312million, it was down 6.8 per cent with the official reason being problems with online betting sites on Cup Day and the wet weather. I reckon it was due to it being a more international Melbourne Cup.

Like The Everest and the All-Star Mile, introduced to get new racegoers, early figures indicate expectations will be exceeded for the Jericho Cup, in which a stayer with just a touch of Bill The Bastard will be hard to beat.

Described as big, tall, strong and tough, Bill the Bastard, a Waler, was Australia’s greatest horse over a distance in battlefield conditions and was one of 130,000 to leave here for World War I.

According to historian Professor Roland Perry, troops at Anzac Cove would punt on whether the horse and rider would bring the mail successfully or be shot down by Turkish soldiers on the 11km course from the beach.

‘‘It was a bit macabre whether they were betting on the best rider in the cavalry or Bill,’’ Perry wrote. ‘‘The cavalryman was shot but Bill reared up and got through. He was saved by a vet working very quickly on a flesh wound and left with another bullet in his rump.’’

Michael Shanahan witnessed the feat and wanted to work with Bill. Shanahan persuaded Captain Banjo Paterson to let him take Bill when 100,000 horses headed into the desert for the Battle of Romani on August 5, 1916, to control vital water wells.

Shanahan rescued four injured Tasmanian troopers on Bill. Alas Shanahan sustained bullet wounds to the leg, later amputated. Bill carried him unconscious for three kilometres to a vet station from where he was passed on to a medic.

Most Walers were shot because their partners couldn’t live with the prospect of them being left and mistreated when they shipped out. A deal was made for Bill, who was left at Gallipoli to pick up relics.