The Canberra product says Bogut's signing is "huge" for the NBL and hopes it opens the door for the likes of Canberra's Patty Mills, Ben Simmons, Joe Ingles and Matthew Dellavedova to follow suit in the twilight of their careers. 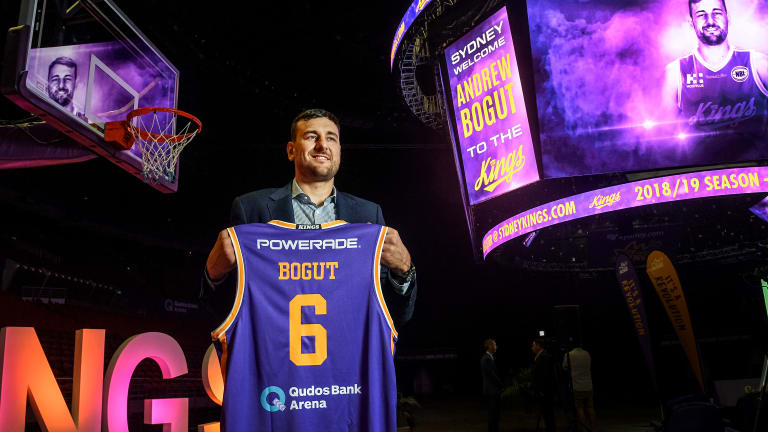 A few things are certain when it comes to Bogut's deal with the Kings. It isn't about money – he could have got a lot more elsewhere, and he is committed to the team and the league with no get-out clauses.

So committed that Bogut is prepared to invest in the Kings – there is "10 per cent waiting" for him when he finishes playing and the "capacity to get to 50 per cent" ownership.

That is what fills Wagstaff with the most excitement about the arrival of the NBA champion and former No. 1 draft pick – Bogut means business, and he hopes it paves the way for more to follow suit.

"Bogut’s signing, it is huge obviously for Sydney but it’s big for the league too," Wagstaff said.

"To have his calibre of player come back to the NBL, it’s huge. This isn’t a bloke that is coming back here to retire, he’s 33 and it’s not as if his best days are past him, he’s still got a lot to give.

"He’s obviously a hell of a player, he’s still in his prime and obviously NBA calibre, so it’s great for the league.

"I think he has been a bit unlucky with injuries too, they’ve been freak injuries and not wear and tear injuries, so if he can stay healthy that’s massive.

"You’d hope [more NBA players follow suit]. It’s completely different over there, obviously the money is next level. Perhaps the NBL provides a bit better work-life balance if you will, they’re playing 82 games minimum and we’re playing 28 games minimum, so there is a significant difference.

"Being away from the country you grew up in can take its toll too, so hopefully in the coming years some guys come back and play out some good years here. Bogut’s got a lot of good years left so we’ll see."

Wagstaff played a key role for a Bogut-less Australia as the Boomers brushed aside everyone that stood in their way on the road to Commonwealth Games gold on the Gold Coast earlier this month.

The Boomers will host the star-studded United States men's team on home soil for the first time since the Sydney Olympic Games in a two-game series in Melbourne next year.

But Team USA looms as a much tougher test – NBA stars LeBron James, Steph Curry, James Harden and Kevin Durant could be among the players on the roster for the warm-up series in August a week before the 2019 World Cup in China.

The Boomers, to whom Bogut has committed for the World Cup and 2020 Olympic Games, are hopeful many of their own high-profile players will suit up with Mills, rookie of the year contender Simmons, Ingles and Dellavedova leading the way.

Wagstaff says suiting up against the best in the world "would be absolutely phenomenal" but he admits "I won't be holding my breath" with Australia's NBA stars available.

Regardless, the Wildcat says it is great for Australian basketball and for now he is just happy to bask in the glory of Commonwealth gold.

"I think I said before we went away it was a once in a generation kind of opportunity and it definitely proved to be that, it was a phenomenal experience," Wagstaff said.

"Getting that gold medal, I’m not sure how long basketball will be around at the Comm Games, obviously it’s only been in twice, a Comm Games gold in basketball is pretty rare so a phenomenal experience."