Respected cricket commentator Jim Maxwell has escalated his war of words with Shane Warne, describing the spin king as "totally disrespectful" and sounding like "a punter in a pub, not a commentator".

Maxwell was scathing in his criticism of Warne's perceived bias towards the Melbourne Renegades during Friday night's Big Bash semi-final where Warne described umpire Gerard Abood as a "muppet". 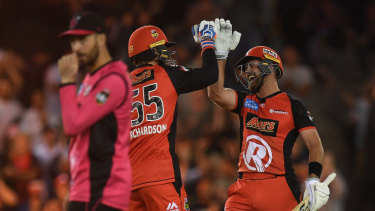 Final bound: Kane Richardson and Dan Christian (right) of the Renegades celebrate after beating the Sixers.Credit:AAP

Maxwell took to social media while Warne was in the Fox Cricket commentary box watching the Renegades book a spot in the Big Bash final with a three-wicket win over the Sydney Sixers.

The doyen of Australian cricket broadcasting said in one tweet "you are a commentator not a cheerleader", then in another post "[umpire] Gerard Abood made a pedantic ruling but please, as a commentator, say that without personal attacks … "muppet"??"

Maxwell, who is widely regarded as one of the most knowledgeable and respected media figures in the game, did not back away from his thoughts when contacted and said: "You can say what you like about the decision, but don't say 'muppet'. That's out of control.

"That's where, unfortunately, I think he often sounds like a punter in a pub, not a commentator.

"That's what he is supposed to be, a commentator, but I don't think he has much direction and is allowed to do what he wants to do because he is Shane Warne.

"He doesn't behave like that when he's on Sky [TV in the UK] or when he was with Nine, as far as I can remember. He was a bit loose, put it that way. 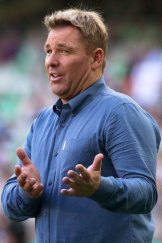 "I just thought it was totally disrespectful. That's Warnie. If you look at social media, a lot of people accept the fact that's how he is and they live with it.

"Unfortunately, commentary has become a whole lot looser than it used to be. Maybe that's the way people want it. I don't know. I find it hard to swallow when a bloke with his reputation in the game makes personal attacks on officials. That's pretty ordinary."

Maxwell, who resides in Sydney, also could not understand Warne's unofficial barracking for the home side.

"It got to the point where he was so keen it was outrageous," Maxwell said. "Then all of a sudden he sensed perhaps they weren't going to win, then he started talking about changing the rules for the finals. Then he was back on track again when Dan Christian had his cameo [to win the game]."

"He makes us react to it, and that's one of the things that makes him a world-class sports commentator."

It is understood Warne and Abood, who was standing at square leg and controversially ruled a no-ball when Renegades keeper Sam Harper moved his gloves in front of the stumps, met after the match, and the official even requested the spin great sign his book for his son.

The Big Bash will be an all-Melbourne final between the Renegades and Stars after the Sixers failed to defend 180 runs.

A disappointing crowd of 15,342 attended Friday nights semi-final, which again raised questions about the Twenty20 tournament out-staying its summer welcome.

Crawley, however, defended the BBL running deep into February.

"There are a couple of hundred thousand people who watch every match we put to air, sometimes more, and for them it's not too much," Crawley said. "For the person down the street it's too much, but that's why people have subscription TV, to satisfy their taste. For me and those hundreds of thousands of people watching at home, there can't be too much because we love our sport."