Essendon spearhead Joe Daniher isn’t able to put a timeline on when he’ll return from his debilitating groin injury, admitting that he hasn’t recovered as quickly as he would’ve liked.

The reigning club best and fairest and All-Australian played the first seven games of the year before being given time to rest and strengthen his troublesome groin. 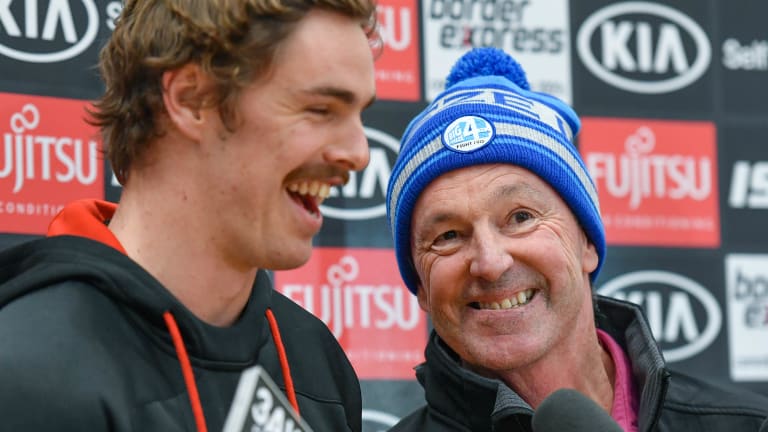 Joe and Neale Daniher share a laugh on Wednesday.

And while the 24-year-old is doing everything he can to get back out on the park, including swimming, bike riding and cross training, Daniher is unable to put an exact deadline on his AFL return.

"It's probably a little slower than I'd like, as any footballer that's on the sidelines has that feeling where you try and push to get back as quick as possible, but I'm fully understanding I need to get this right to have the best chance of succeeding at the back end of the year," Daniher said on Wednesday.

"Hopefully that includes some finals footy for our club and we keep winning, get on a roll and that's what will take place.

It’s been a tough season for Daniher, to say the very least.

Fresh after signing a long-term deal at the end of last season, and on the back of 65 goals in 2017, the power forward managed only eight goals in his seven games before the severity of his injury was made public.

Prior to that, he was the target of some pointed criticism, particularly given the team’s parallel poor form.

But when talking about his season, he was able to address it while engaging in some priceless banter with uncle Neale Daniher, who he was standing next to, to help promote the Fight MND campaign.

“Oh, no, don’t get him started!” Joe exclaimed. “Too slow! Not fit enough!” he smirked.

“I did send him a text when all you guys were ganging up on him … all of you … all of you!” Neale laughed and pointed at the reporters, channelling former Essendon teammate Mark Thompson.

“We are a bit protective and Joey said: 'Shut up, Neale!'

“I make sure we don’t get in the way of Joey, he’s building his own career. He’ll have his setbacks, his challenges, but he’ll find his own way and we’re right there behind him if ever we’re needed.”