Ricky Rubio recorded 26 points, 11 rebounds and 10 assists for his first career postseason triple-double to lead the Utah Jazz to a 115-102 victory over the Oklahoma City Thunder on Saturday night at Vivint Smart Home Arena in Salt Lake City. 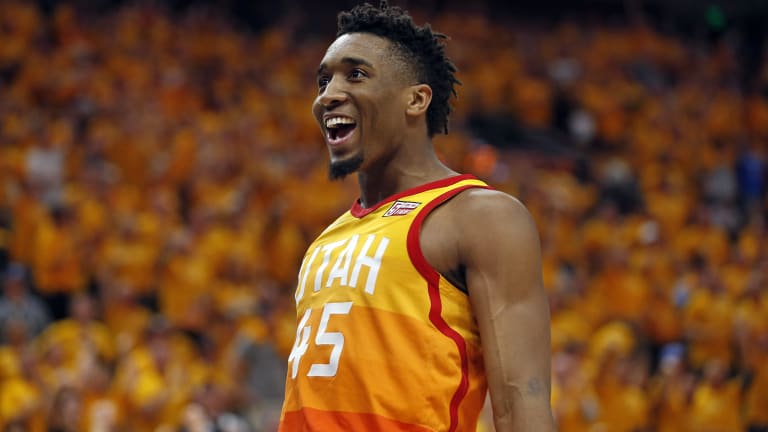 Donovan Mitchell celebrates scoring on the way to victory.

Utah, who held a 48-33 rebounding edge, pulled away with a dynamic 13-0 fourth-quarter run that pushed their lead to 20 points.

"We're playing hard, we knew they were going to come aggressive out there," Rubio said in a postgame television interview on ESPN. "It feels good to win. We protected our home court. It's great to play in front of these fans and (again) for the next one."

A short time later, Ingles scored eight straight points on two 3-pointers and two free throws to boost the Jazz lead to 101-86. Gobert added an inside hoop and Mitchell drained a 3-pointer to cap the 13-0 burst and make it 106-86 with 5:10 left.

Felton connected on a three-pointer with 4:13 remaining to end the Thunder scoring drought of four minutes, 55 seconds. But there would be no last charge and coach Billy Donovan cleared the bench with 2:29 left.

Oklahoma City opened the third quarter with a 10-2 surge and held a 63-60 lead after Anthony's three-pointer. Utah responded with the next nine points with Mitchell's basket capping the run and accounting for a six-point edge with 7:41 remaining.

The Jazz used a 7-0 push later in the quarter to take an 82-70 lead on Gobert's dunk with 2:41 left. Then Rubio capped the stanza in style with a running 3-pointer to beat the buzzer and give Utah a 89-75 lead.