SAN JOSE, Calif. — As his San Jose Sharks teammates headed off the ice and out of sight of their towel-waving, victory-serenading fans on Saturday, Joe Pavelski skated over to Section 113 at SAP Center and scoured the faces in the crowd. He spotted his wife, Sarah, and the couple’s 8-year-old son, Nathan, and waved.

Pavelski, who had contributed a goal and an assist to the Sharks’ 6-3 win against St. Louis in Game 1 of the Western Conference finals, said it was not the first time he had gone out of his way to recognize his family after a game.

But after one of the tougher stretches of his career — “if not the toughest,” Pavelski said — the gesture took on added poignancy.

Pavelski, 34, is the Sharks’ captain and their True North. He would do anything for his hockey family, including scoring a goal off his jaw in the Sharks’ playoff opener against the Vegas Golden Knights. In the process, he lost a few teeth and added a few stitches.

That looked bad, but then things got worse. In Game 7 of the same series, Pavelski took a crosscheck to the chest, collided with another skater, fell and hit his head hard on the ice.

He lay motionless for several seconds as his blood pooled around him. After Pavelski was helped off the ice by teammates, the Sharks, down 3-0, rallied on behalf of their beloved and battered leader, scoring four power-play goals in less than five minutes, then dispatching the Golden Knights in overtime.

Pavelski needed staples in his head to close the gash and experienced concussion-like symptoms. He did not return until Game 7 of the next series, against the Colorado Avalanche. Like Willis Reed in pads and a helmet, he collected a goal and an assist in a series-clinching victory.

Forward Timo Meier said Pavelski’s injury was “something that kind of gave us a wake-up call.”

“Now to have him back, it’s obviously shown how he makes a difference, and not just on the ice, but the stuff he does in the room, how he gets guys going,” Meier added.

After the goal and assist in the first game against the Blues, he was held without a point in a 4-2 loss in Game 2. The series resumes Wednesday with Game 3 in St. Louis.

“The timing feels good,” Pavelski said. “You step on the ice when you get back, and it’s the playoffs and you’re playing, you’re invested, you’re playing hard. Guys have been playing good, so you’re slotting in with a good line that are playing with some confidence; you want to help them out.” 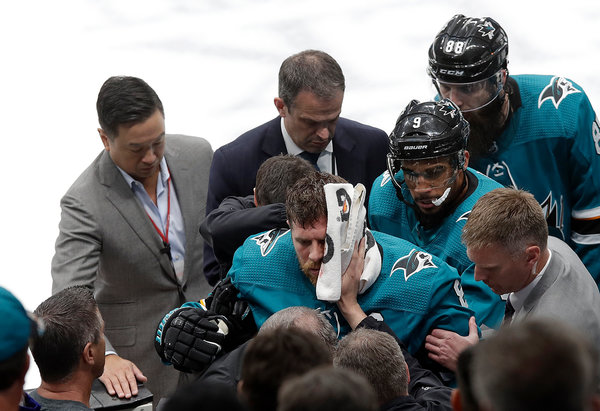 Pavelski is part of the Sharks’ core four, along with Joe Thornton, Brent Burns and Marc-Édouard Vlasic. They have been together for 13 seasons, but Pavelski and Thornton, 39, are in the final year of their contracts. The Sharks, who added the star defenseman Erik Karlsson in the off-season, desperately want their first Stanley Cup.

“Our window is now,” Coach Peter DeBoer said in September before the season began. “This is our opportunity.”

But how does Pavelski balance the magnitude of this occasion with all the mundane moments he hopes to spend with his wife and son for decades to come? Players’ teeth can be replaced, but they get only one brain.

The long-term effects of head trauma have become a subject that many players — most of them retired — are starting to broach, even as the N.H.L. commissioner, Gary Bettman, insists that the scientific evidence linking head injuries to degenerative brain disease is inconclusive.

“You try to be smart about it with health,” Pavelski said. “You have a lot of people reaching out to you, people who aren’t doing as well, to tell you to take care of yourself first. I think I’ve done that. I’m in a good position and feeling confident about my health and abilities right now.”

The stakes are enormous for Pavelski, and not just on the ice, where he’s determined to deliver San Jose’s first N.H.L. championship. Ask the team’s television analyst, Jamie Baker, who reports on the game from ice level. Baker, 52, a retired center, stepped away from his broadcasting duties last year to seek treatment for depression, impulsivity and suicidal thoughts, all of which he said had plagued him for years. Baker said that he had sustained several concussions during his playing career, which included 187 games with the Sharks, and that they seemed to have exacerbated his mental-health struggles.

Any uneasiness that Baker felt about Pavelski’s quick return from his head injury evaporated in the first period of Pavelski’s first game, when he was knocked to the ice by the Avalanche’s Ian Cole, who was called for interference.

“He got thrown down pretty hard,” Baker said. “I watched him getting up, I literally got to see his face, and I could tell he was O.K. That’s the test, because the one thing you’re not going through in practice is the extreme pace of an N.H.L. game and the physicality.”

After Saturday’s game, a towering tattooed man — wearing a bejeweled ring that drew the eye away from his body art — stood outside the Sharks’ dressing room waiting for Pavelski. He was Scott Parker, a member of the 2001 Stanley Cup-champion Colorado Avalanche, who appeared in 11 games for the Sharks in 2006-07, Pavelski’s rookie season.

In a 2013 interview with The Denver Post, Parker described experiencing short-term memory loss, sensitivity to light, nausea and dizziness — all symptoms that have been linked to repeated head trauma.

Nevertheless Parker, 41, said he was pleased to see Pavelski back on the ice.

“It’s Pavs,” Parker said, grinning. “There’s nobody like him.”