SAN DIEGO — A golf ball hit by one of the leaders lodged in the limb of a tree. A shot by another contender settled next to an open case of beer. No one seemed able to keep his footing on the 13th tee, where the surface was as unpredictable as a carnival Tilt-A-Whirl. The reigning champion missed a hole in one by an inch.

The final round of the 121st U.S. Open on Sunday did not lack for tension and theatrics. But Jon Rahm, who two weeks ago was forced to withdraw from a tournament in tears because he had tested positive for the coronavirus, found the resolve to birdie the final two holes at Torrey Pines Golf Course to win America’s national golf championship by one stroke.

The victory was Rahm’s first in a major championship and made him the first Spaniard to win the event. On June 5, he was leading the Memorial Tournament in Ohio by a commanding six strokes when the coronavirus test kept him out of the final round. Informed of the result as he came off the 18th green, Rahm doubled over and left the area wiping his eyes.

An UNREAL finish and he leads at the #USOpen!
pic.twitter.com/Bdozxfkdmb

On Sunday night after his U.S. Open victory, Rahm, 26, said that when he was cleared last week to return to the tour and play at Torrey Pines he felt that “the stars were aligning.”

“I just had a good feeling knowing I was coming to San Diego,” said Rahm, who has often visited the area and who proposed to his wife, Kelley, at Torrey Pines. “Every time we come here, we’re happy. It had to happen this way, every part of the journey.”

That included, Rahm said, what transpired at the Memorial Tournament.

“I was never resentful for anything for any second, and I don’t blame anybody,” he said. “Unfortunately Covid is a reality. We have lost a lot of people. People said it wasn’t fair, but it was what had to be done. And all of it led to this moment.”

Louis Oosthuizen of South Africa finished second at Torrey Pines, the sixth time he has been the runner-up in a major golf championship. Oosthuizen, 38, won the 2010 British Open, then placed second at the 2012 Masters, at the 2015 U.S. and British Opens and at the P.G.A. Championship in 2017 and in 2021, when Phil Mickelson won to become the oldest major champion.

Rahm’s victory ended a streak of six consecutive American winners in the event. With about two hours left in Sunday’s championship, nearly 10 players had a chance to claim the title. However, in the final 45 minutes, the chase narrowed to Rahm and Oosthuizen.

Rahm, who began the final round three strokes off the lead held by Oosthuizen, Russell Henley of the United States and Mackenzie Hughes of Canada, played his opening nine holes at two under par to jump up the leaderboard. Seven consecutive pars beginning on the 10th hole kept Rahm in contention. The streak included a pivotal par putt from 20 feet that he sank on the par-3 16th hole. Rahm, a passionate player who was once best known for his fits of temper instead of for his game, closed with a flourish.

At the 17th hole, trailing Oosthuizen by a stroke, he wisely flew his tee shot to the right of the fairway, where there was ample room, then knocked his approach onto the green. Sizing up a 24-foot par with at least six feet of left-to-right break, Rahm gently tapped the downhill putt, which curled into the hole for a birdie that put him in a tie for the lead at five under par. 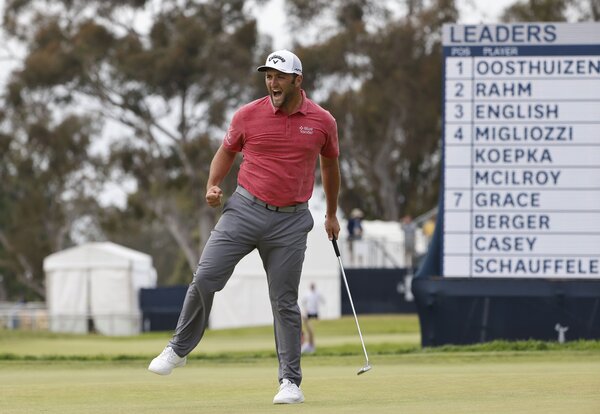 From 18 feet, Rahm sank another curving putt, the ball slipping into the right edge of the hole. His emotions now welcome, the popular Rahm pumped his right fist repeatedly as fans enveloped him in raucous cheers. A four-under, final-round 67 had made Rahm the leader in the clubhouse.

Oosthuizen had a chance to catch Rahm, but he pulled his tee shot at the 17th hole left into a ravine. The mistake led to a devastating bogey that ruined his opportunity to force a playoff, even with a birdie on the 18th hole.

Earlier Sunday afternoon, at about 2 p.m. Pacific time, it appeared that Bryson DeChambeau might successfully defend his 2020 U.S. Open title, as his tee shot on the 175-yard, par-3 eighth hole bounced onto the putting surface and tracked toward the hole until it stopped one inch from the lip.

DeChambeau followed up the tap-in birdie with two pars, but his powerful drives began to drift right and into the rough. That led to bogeys at the 11th and 12th holes. On the par-5 13th tee, like many of his competitors, DeChambeau slipped as he pushed off his right foot. The drive was short and in the thick grass, as was his next shot. A third shot ended up in a bunker and his escape from the sand flew over the green until it came to rest next to a cardboard box of beer.

By the time DeChambeau putted out on the hole, he had made a double-bogey 7. He shot 44 on the back nine and 77 for his final round.

Minutes after DeChambeau’s near ace, Rory McIlroy missed a seven-foot birdie putt on the seventh hole that would have tied him with DeChambeau. It was the high-water mark of the tournament for McIlroy, who was seeking his first major championship since 2014. A bogey on the 11th hole and a disastrous double bogey on the 12th derailed his hopes, and he finished five strokes back at one under par.

Hughes stayed in the hunt until a shot to the 11th green lodged in a tree, a mishap that resulted in a double bogey and sent him tumbling down the leaderboard.

Celebrating on the 18th green Sunday evening, Rahm held his infant son, Kepa, in his arms, smiled and looked around at his parents and other members of his extended family.

“Even though Father’s Day in Spain is a different day, I’m forcing him to celebrate it today,” he said, “and we’re going to have fun because there’s three generations of Rahms on this green right now. One of them doesn’t really know what’s going on, but I am glad he’s going to get to see it in the future and enjoy it.”