ROMA boss Jose Mourinho has urged Arsenal star Granit Xhaka to 'get the jab and be safe' after refusing to accept the vaccine and later catching coronavirus.

The 28-year-old tested positive for Covid-19 while on international duty with Switzerland earlier this week. 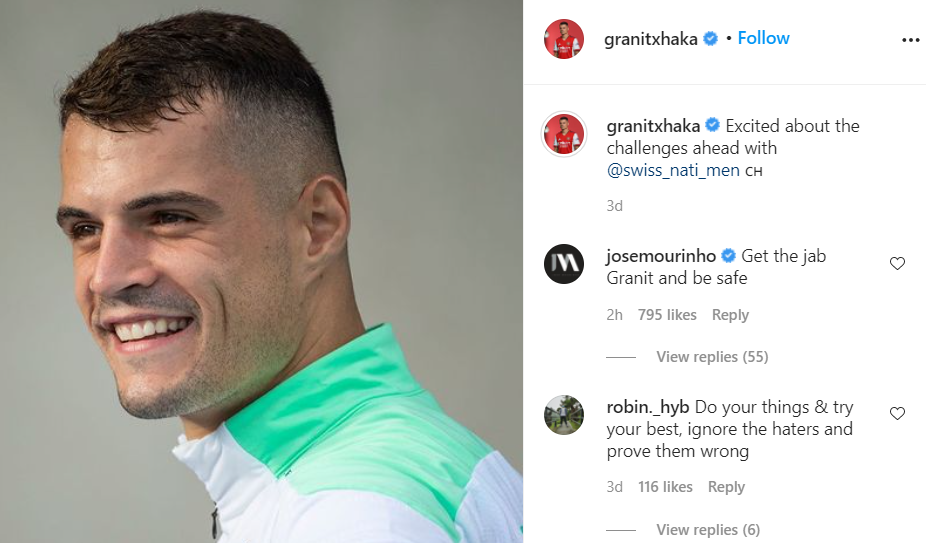 Xhaka is currently with the Switzerland national team and uploaded a picture of himself smiling to Instagram a few days ago – just hours before his positive result.

The Swiss ace captioned the snap: "Excited about the challenges ahead."

The next, day, Xhaka tested positive for Covid-19.

He will now miss the national team's upcoming World Cup qualifiers against Euro 2020 winners Italy and Northern Ireland, having already been forced to sit out the 2-1 win over Greece.

Xhaka is the only member of the Swiss squad isolating after rejecting the opportunity to get the jab.

And Mourinho, who tried to sign Xhaka for Roma during the summer, has replied to the player's Insta post to reveal his thoughts on the matter.

The former Manchester United, Tottenham and Chelsea boss wrote: "Get the jab Granit and be safe."

BETTING SPECIAL – GET 20/1 ON ENGLAND TO BEAT ANDORRA

The Swiss FA confirmed Xhaka's Covid diagnosis in a public statement on Wednesday.

The governing body said: "Xhaka was diagnosed with symptoms on the morning of the game and was immediately isolated in his room.

“A quick test turned out negative, the subsequent PCR test, carried out to be on the safe side, produced a positive result in the evening."

SunSport revealed in August that there are players in EVERY Premier League team refusing to get the jab.

"We left this up to each player, it's a personal decision of each player – just like any other person in Switzerland.

"We have issued a recommendation that everyone vaccinate.

"But he decided for himself personally. And it is also his right not to be vaccinated."