The Canberra Raiders have secured the prized signature of star forward Josh Papalii with the State of Origin enforcer signing a four-year contract extension.

It is a massive vote of confidence in the direction of the Green Machine as they prepare to face the Wests Tigers at Campbelltown Stadium on Sunday. 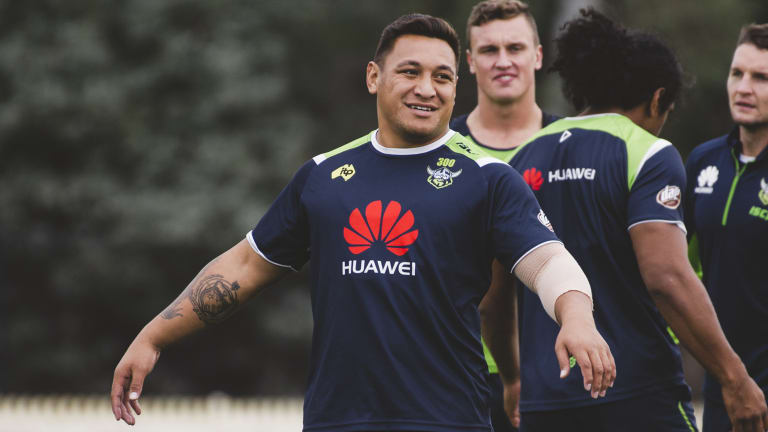 The Raiders managed to ward off interest from South Sydney and Cronulla to retain the Queensland Maroons' most experienced forward until the end of 2022.

Papalii's retention comes after halfback Aidan Sezer agreed to terms for a two-year contract extension, with the playmaker set to put pen to paper in the coming days.

Deputy hooker Siliva Havili and prop Dunamis Lui are close to signing two-year contract extensions in a boost to Canberra's depth, while Sia Soliola is edging closer to a new deal.

The Raiders will lose heavyweight props Junior Paulo (Parramatta) and Shannon Boyd (Gold Coast) at the end of the season and the club is negotiating new deals for a raft of off-contract stars.

However the prized signature of Papalii is a massive boost to the Green Machine's hopes of forcing their way into finals contention.

"I love Canberra and I love the green jersey," Papalii said.

"This is my home and the Raiders have given me the opportunity to play in the NRL and I want to continue to repay them.

"Canberra is my home and this is the best place for me and my family to continue to live and for me to play my best footy."

Raiders coach Ricky Stuart axed Papalii to reserve grade in April as the Samoan international paid the price for a poor start to the year, but the wake-up call has seen him reach a new level in his game.

Papalii churned out 134 metres, had a line break and a try assist for the Green Machine last week, having run for 94m and made 25 tackles in the State of Origin series opener just two days prior.

Raiders recruitment manager Peter Mulholland says Papalii's signature is a vital one for the club.

"Josh is a big part of our football team and our club," Mulholland said.

"We know what a tremendous talent he is on the field and he's the type of player others want to play with.

"We're very happy that's he's re-signed with us and we look forward to seeing him continue his career in Canberra."