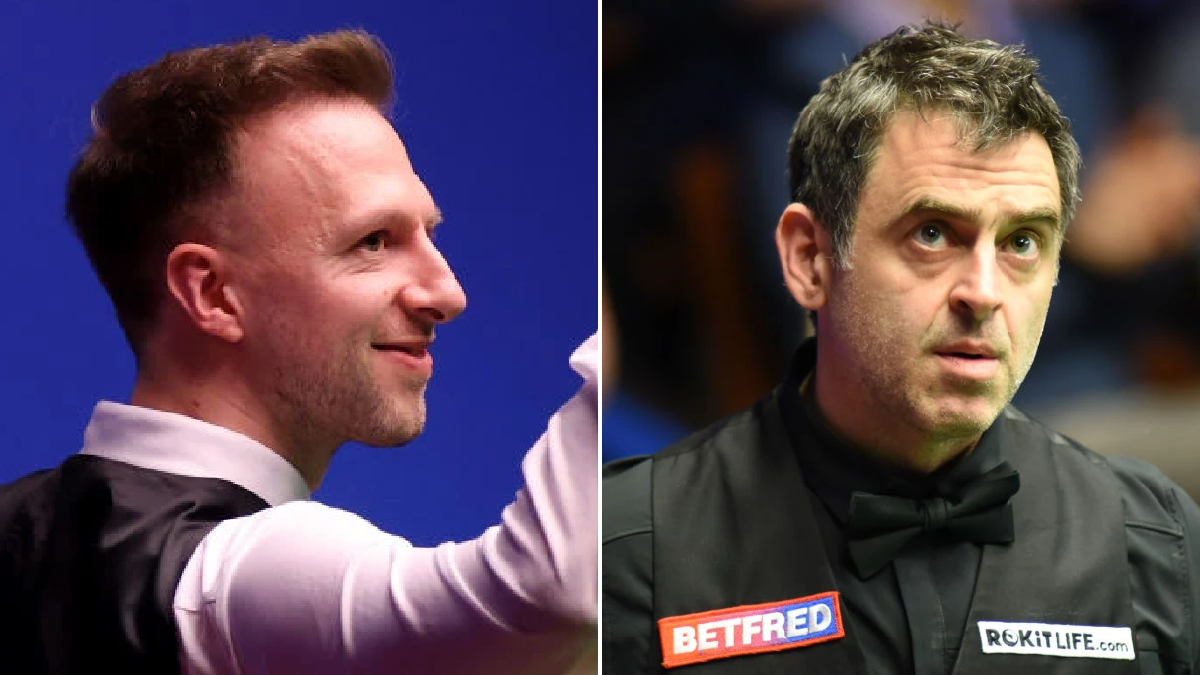 A Ronnie O’Sullivan documentary is being filmed at the World Snooker Championship this year and we now know that only one man can stop it from having the Hollywood ending it seems destined for. Judd Trump.

O’Sullivan’s life has been pretty well documented for the last 30 years, but the cameras have been following him round intensely at the Crucible over the last 15 days, making, what is sure to be, a hugely popular piece of work.

The Rocket has revealed the crew have had access to all areas and he has even had a microphone in his waistcoat while playing, to capture every last utterance of the great man at the table.

The film-makers have enjoyed the 46-year-old making his way to an eighth World Championship final, beating a string of fine players en route with apparent ease at every turn.

Dave Gilbert, Mark Allen, Stephen Maguire and John Higgins all failed to lay much of a glove on O’Sullivan as he has waltzed into the final with barely a step out of place.

A seventh world title is just 18 frames away from him now, which really would be the ideal ending to his film. Capturing the one meaningful record in snooker that has evaded him to date – Stephen Hendry’s seven Crucible triumphs.

He would be very unlikely to admit it – in fact he said pre-tournament that he ‘couldn’t give a monkey’s if he was bombed out first round’ – but the allure of this all coming together on film has seemed to give the Rocket a razor sharp focus we don’t always see from him.

Aside from the odd daft interview, it has been all business from O’Sullivan this tournament, playing all the right shots at all the right times and generally getting them all right as well.

Even when his tip has bothered him and he has seemed to have serious issues with the cleanliness of the cue ball, it has not affected his focus and how well he has played.

It is unrattled, fully focussed, well prepared and high quality O’Sullivan. The model professional ready to sign off his final scene by lifting the trophy, making history and bowing to his adoring crowd as the curtain falls at the Crucible.

Unless there is a serious twist in the tale. At the moment this appears to be a movie in the mold of James Bond. Okay, he’ll be shot at quite a lot and his car might blow up, but we know he’s going to be alright in the end and win the day because it’s a film. There’s drama along the way, but there is no real jeopardy.

Judd Trump has the chance to turn all that on its head, rip up the script and slap a new one on the director’s desk which sees O’Sullivan giving the loser’s speech and the Ace holding the famous trophy aloft.

There are no guarantees in sport and come to think of it, James Bond did actually finish the last film in a pretty sticky situation, so even on the silver screen things can decay pretty rapidly at the finale.

But can Trump fill the role of the ultimate villain? Mark Williams entertainingly answered that very question after he was beaten 17-16 by Judd on Saturday.

‘I’ve been asked some stupid questions in my time, but that’s up there,’ said the Welshman. ‘Of course he can win it, there’s no question.’

He came to the Crucible out of form, lacking belief and seemingly out of love with the game, but hard fought wins over the likes of Anthony McGill and Williams have sparked something back into the 32-year-old.

‘Incredibly proud of what I’ve achieved,’ he said after beating Williams. ‘I came here not expecting anything. Honestly, I didn’t expect to win my first game.

‘As the tournament’s gone on I’ve started hitting the ball better and better. Against McGill he really pushed me and I started to play well. If I can get off to a good start I truly believe my best game is very close.’

The Bristolian goes in as the underdog, as you would expect against the hero of the piece, and knowing full well that he will fulfil the role of the bad guy against the Rocket.

Ronnie O’Sullivan was Trump’s own hero growing up, his snooker idol, and part of the reason we see him playing the exhilarating, attacking game he does.

‘We both go for our shots and we both go to win the game in one visit. I think that’s where we’re very similar,’ O’Sullivan told tournament sponsors Betfred of Trump.

‘Sometimes we have to pull shots out the bag to keep the break going, whereas other players might bail out and play a bit of safety. So we’ve got a similar mindset.’

The storyline gets juicier and juicer ahead of this epic’s final scenes, with Trump looking to topple his idol with a brand of snooker inspired by his opponent, proving that he is now the most powerful force in the game and he can look down from his lofty perch on the man he has always looked up to.

It is a fascinating story in itself, but it is not the one that seems destined to take place at the Crucible this year.

O’Sullivan is always the star of the snooker show and seems ready to deliver his pièce de résistance on the sport’s greatest stage.

Long seen as his heir apparent as the game’s leading man, Trump is tasked with ruining his hero’s party and taking the curtain call for himself.

A happy ending to O’Sullivan’s story or a Trump-inspired tragedy? Two more days of Crucible drama and we will find out.