Harrison will compete in both the high jump and the long jump at the Tokyo Games, the first American man to do so at the Olympics since Jim Thorpe in 1912. 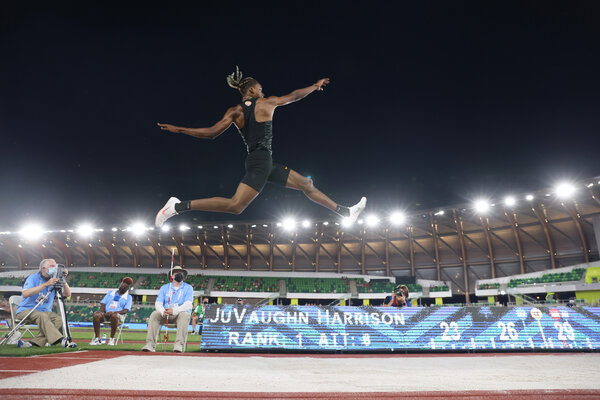 TOKYO — Jim Thorpe did it. But for the last 109 years, no American man has competed in the Olympics in both the high jump and the long jump.

Now JuVaughn Harrison will match that Thorpian feat, and quite possibly win a medal or two.

Like a lot of great high school athletes, Harrison excelled at just about everything: He was a soccer midfielder and a 6-foot-5 small forward in basketball. In football he was a quarterback, receiver and kicker.

As for track, “I really just did what my school needed for points,” he said. That included high jump, long jump, and 110 meter and 300 meter hurdles.

But when he was recruited for the Louisiana State track team, it was for just one thing.

“They were really looking for me to do high jump, because that was my premier event,” he said. “Long jump was their way of giving me a break so that I didn’t focus too much on high jump.”

Todd Lane, an assistant coach at L.S.U., said Harrison’s “speed over 30 meters is some of the best we’ve ever had.”

“The thought was, let’s see if we can utilize some of that athletic ability in another event,” Lane said. “High jump can be a tough event on the psyche; you end on failure every time, so the opportunity to add something else into the mix was a nice way to break that up for him.”

Making an impressive athlete into an impressively technical one was the coaching staff’s main goal when Harrison arrived at L.S.U. “Everything got broken down when I got to college,” he said. “My coach stripped everything to the bare bones and rebuilt it when it came to my long jump and high jump: the approaches, and how I jump and maneuver in the sand and over the bar.”

Lane said: “His first two meets in the high jump, it was evident that he was supremely talented, but also supremely hard headed. He wanted to jump like he was still in high school, where he’d jog up to the bar any which way he wanted to.

“I strongly and profanely told him, he could either change and do what I was asking him to do, or do it his way, which would mean he would end up running the 400 meters because he wasn’t going to help us as a high jumper. The whole time our head coach is standing a few feet away just saying shaking his head saying ‘Yep, come run the 400 with me.’”

Harrison soon started putting up world-class performances in each jumps, even the one that was supposed to be “a break” for him.

Now he has reached the peak in both events, winning N.C.A.A. championships, indoors and out. The culmination was wins in both at the Olympic Trials, clearing 2.33 meters in the high jump (about 7 feet 7 3/4 inches) and 8.47 meters in the long jump (about 27 feet 9 1/2 inches).

Despite his success over the years, Harrison has had pushback from some quarters about sticking with both events.

“There were some people who told me it’s going to be hard to excel at both,” he said. “But I just took that as motivation to do something that hasn’t been done yet.”

Harrison said the high jump was the more technical event. “For high jump, you don’t need as much speed. Positioning is more important, where I am when I plant. In long jump, I think more about pushing out, building up speed, being upright and moving off the board, instead of hitting the board and going straight up.”

Long jump is more tiring, he said, while high jump has more of a luck element. He declined to commit one as more satisfying or more fun, saying he enjoys both.

Harrison will compete for four straight days at the Games, starting on Saturday. He’ll do high jump, then long jump qualification, followed by the two finals if all goes well. “It’s definitely doable after the Trials,” he said, noting that he had to do both events on the same day at that meet in June.

“I’m treating like it’s every other meet,” he said. “Focusing too much on how important the meet is, is how you make yourself perform worse.”

Thorpe is mostly remembered for winning gold in the pentathlon and decathlon in 1912, but he also finished fourth in the high jump and seventh in the long jump. The prospects for Harrison in those events seem to be even better, as he is among the yearly leaders in both events.

Which leads to the logical next question: Has he ever thought about adding a third event?