Luke Keary's knee injury threatens to rob the Roosters of their five-eighth during the finals run-in as Latrell Mitchell's second point-scoring blitz in as many weeks fired the tricolours into the minor premiership race after they dismantled the Dragons. 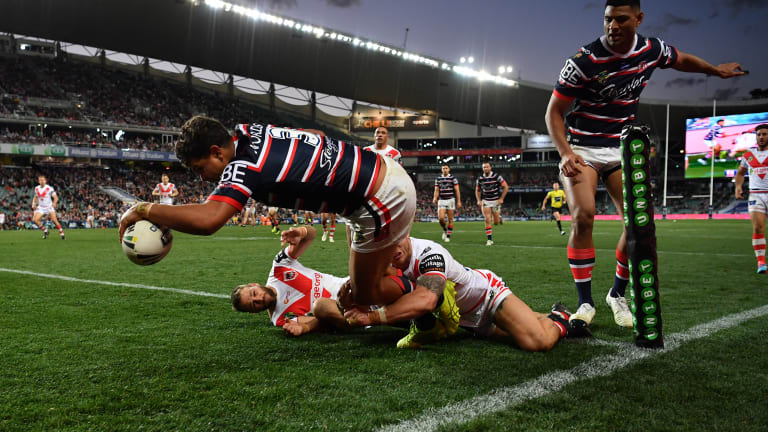 Star turn: Latrell Mitchell scores out wide for the Roosters.

The Roosters' five-eighth limped off in the second half after his leg buckled under teammate Lindsay Collins during an awkward tackle, throwing a scare through the Roosters camp just a month out from the finals. He's unlikely to feature next week.

It was the only sour note as the Roosters sounded their most ominous warning of the year to premiership fancies Melbourne and South Sydney, leapfrogging the Dragons into third and climbing to within two points of the competition lead.

Just a week after logging 24 points against a hapless Sea Eagles, Mitchell razed the Dragons with a sublime hat-trick and six goals to rack up another personal 20-point haul. 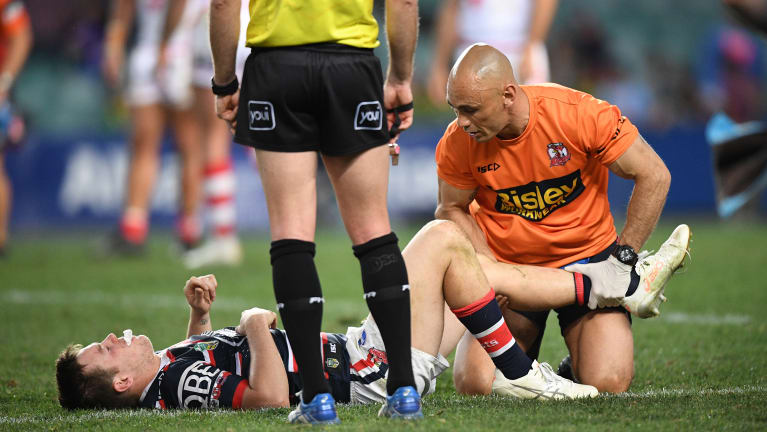 Man down: Luke Keary receives treatment. The prognosis was later revealed as more likely an MCL, not an ACL, injury.

James Tedesco was just a lethal as the pair helped prolong St George Illawarra's abysmal record against the Roosters outside of Anzac Day, having not beaten their arch rivals since the 2010 grand final.

Roosters fans can start dreaming about featuring in their first decider since 2013, Trent Robinson's first year in charge as the famously unsentimental coach was able to at least sleep somewhat content after his 150th NRL game at the helm.

But he will be tossing and turning over Keary, so instrumental as Cooper Cronk's foil for much of the year.

"I don’t think it’s too bad, but I don’t know how quickly we can turn him around," Robinson said. "I felt like he knew it was coming and it was enough to take him off. I don’t think he’s come off very much at all.

"It’s obviously a concern, but seeing him afterwards I don’t think it’s a long term concern."

In recent weeks the Roosters have mirrored a Bart Cummings stayer on the Melbourne Cup trail; one asked to blow out the cobwebs for a couple of months and then thriving coming into the first Tuesday in November.

Two of Robinson's prized thoroughbreds have mirrored exactly that.

Cooper Cronk and Tedesco weren't bought for scrappy early season wins, but what they could do in September. Or on the verge of September. Sunday, Exhibit A.

There have been flashes of them combining until now, but a lovely exchange of passes resulting in Cronk sauntering over untouched to open up a 16-point first-half lead was the type of play Robinson has craved all year.

But maybe the big money pair aren't the tricolours' most crucial bit of horseflesh at the moment. 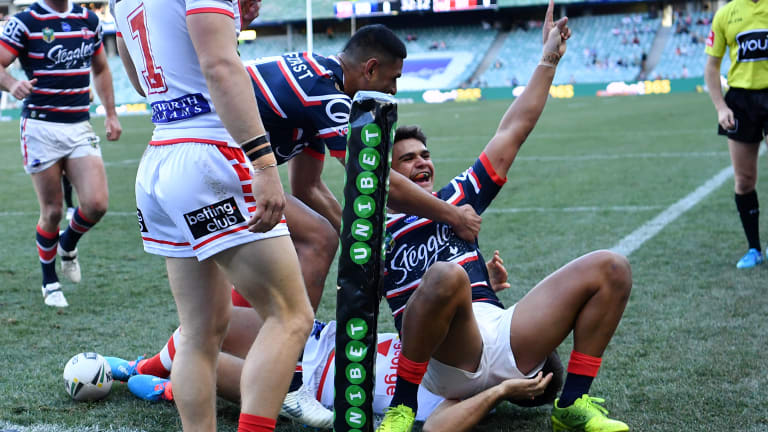 Unstoppable: Latrell Mitchell goes over again for the Roosters on another red-letter day for the Origin star.

That tag could belong to Mitchell, the 21-year-old centre who mauled Manly last week and then destroyed the Dragons. Each of his three tries had a little sprinkling of something different. Brute power at first, opportunism next and then speed and strength to finish.

"I thought he was a beast out there when he needed to be," Robinson said. "I thought the four centres and wingers had a really good day."

Mitchell's No.1 billing might be a tad unfair on Tedesco.

The NSW No.1 was one of the Blues' best in the State of Origin series, but has an even bigger carrot dangling in September as he nears a first appearance in the finals.

Both his tries came from kicks, one pouncing on an astute Blake Ferguson infield chip and the other scooping up Dragons No.6's Gareth Widdop's grubber and bolting almost 90 metres.

Just like on Anzac Day, Ben Hunt's solo effort on the cusp of half-time should have changed the momentum of the game. This time it handed the early season ladder leaders a lifeline, not a valuable lead like a few months ago.

But it was false hope. The Roosters defence refused to yield until the final 15 minutes, by then the result a foregone conclusion. Not that Robsinson was overjoyed.

"I feel like we’re getting better and a lot of players are coming in happy that we won, but not content," Robinson said. "I don’t think that was a complete performance and we’ve got a fair way to go on what we can produce.

"I’m not concerned [about the late tries]. I know who we are. I know what our DNA's like. I see guys working hard, but we defend with heart and I want to see more heart. They strangled them in defence today, but we didn’t strangle enough for what we want to do."