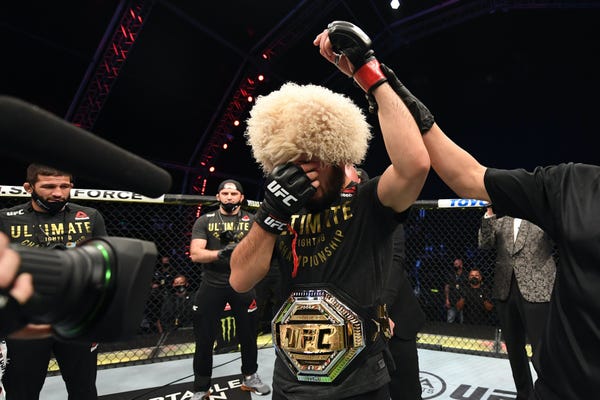 Khabib Nurmagomedov's coach said only time will tell whether the UFC fighter will stay retired as he was emotionally "all over the place" after his fight on Fight Island Saturday.

Nurmagomedov defeated the American striking maestro Justin Gaethje in the second round with a triangle choke submission in the bout.

He then cried in the middle of the UFC Octagon as he mourned the July death of his father Abdulmanap, before abruptly announcing that he would never compete again as he had promised his mother he'd retire.

It brought an end to a career in which Nurmagomedov had scored three successive submission finishes over Conor McGregor, Dustin Poirier, and Gaethje, a career so dominant he barely lost a round, and one he ends with a record of 29 wins and no losses.

There had long been speculation that Nurmagomedov would extend that run to at least a 30th bout, something involving "fun stuff" according to the UFC boss Dana White, or even a legacy fight involving fellow all-time great Georges St. Pierre.

And speaking in The Sun this week, Javier Mendez, who has long trained Nurmagomedov at his American Kickboxing Academy in San Jose, California, said his fighter's emotions were running high and that he cannot tell whether "he's done or not."

He said: "Look at his emotions, he was in tears, he was all over the place."

Mendez said that he was unaware Nurmagomedov would announce his retirement, but once he saw how upset he was, he wanted to comfort him.

Mendez added: "He was extremely emotional … time will tell if it [retirement] will stick or not. Honestly, I don't know and I'm not going to talk to him about it either, not my job. My job is to love him and coach him when he wants to fight."

If his mother granted permission for him to continue his career then fans could see Nurmagomedov return to the UFC Octagon in the coming years, Mendez said.

He added that he had also heard Nurmagomedov say he wasn't ever considering retirement because, at 32, he is still in his peak years as a mixed martial artist.

"If his mother sees that he can continue and that Khabib did actually want to continue then she may say 'Go and fulfill your father's legacy and go 30-0.'

"I don't know, but when I was present he'd always say, 'Why do you guys talk about retirement, I'm only 32.'

"So how is it that all of a sudden you're retired? What else can explain why? His emotions."

One of Nurmagomedov's rivals doubts retirement will stick

Tony Ferguson is a long-time lightweight rival of Nurmagomedov's and was scheduled to challenge him for the UFC championship in April, before the coronavirus pandemic shuttered the world's major sports leagues.

While Nurmagomedov was unable to compete in a rearranged card — the UFC's first major event of the pandemic in May — Ferguson fought Gaethje, lost, and surrendered momentum he had built from an eight-year 12-fight unbeaten run.

But Ferguson believes Nurmagomedov will be back and expects they'll fight one day in the future.

"You're gonna miss it like [Conor McGregor]," Ferguson told Submission Radio. "He's going to be back. So, I'll be f—— ready."

Should Nurmagomedov explore alternative options to professional MMA, then he could pursue an exhibition bout or a pro boxing match.

He had previously held talks with the Russian Boxing Federation (RBF) regarding a crossover bout involving Floyd Mayweather which could be held at a soccer stadium in Moscow.

Speaking to the Russian publication RSport, Umar Kremlev, an executive for the RBF, said: "I respect Khabib, he's a great sportsman, I'll always support him.

"As for his decision [to retire], he left beautifully, undefeated. A charity or exhibition boxing bout? If he wants that, we're ready to organize it."