Joe Powell says starting to think about a World Cup dream will be detrimental to his personal ambitions, so a trip to Centenary Hospital for Women and Children on Tuesday was a perfect reminder to take small steps.

The Wallabies hopeful was part of an ACT Brumbies contingent to take a break from pre-season training to deliver Christmas gifts to children at the hospital. 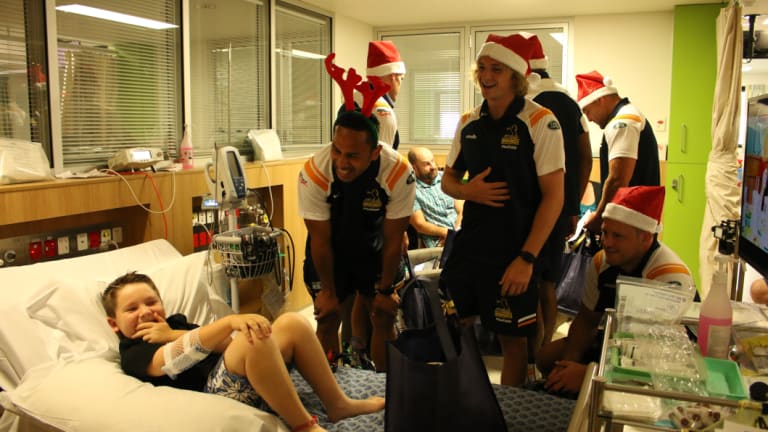 The Brumbies put training on hold on Tuesday to visit children at The Canberra Hospital.Credit:Brumbies Media

The chance to mingle with the children and their families was as far removed as possible from the Super Rugby slog and the hype of a looming World Cup year.

But that suited Powell perfectly as he prepares to launch his bid for a Wallabies recall and chase selection for his first World Cup after being left out of Australia's spring tour squad.

The 24-year-old has narrowed his focus to simply trying to be the Brumbies' No. 1 scrumhalf next year. His World Cup hopes are nagging in the background, but that's where he will keep them until Wallabies selection time.

"I just want to play good footy for the Brumbies and lock down that No. 9 [jersey]," Powell said.

"[The World Cup] is definitely there, but if I think about that I won't play well for the Brumbies and then I'm no chance. It's a good opportunity now to get a full pre-season under my belt and hit 2019 running in good condition."

Powell was joined by Josh Mann-Rea, Toni Pulu, Tevita Kuridrani, James Slipper and Tom Cusack at the hospital visit, with the players spending more than an hour delivering gift packs to different wards.

"We're lucky we get to do this sort of stuff," Mann-Rea said. "The kids light up when they see you, they're doing it pretty tough so it's good to see them get a bit of enjoyment when you get here.

"I was talking to one family and I can't imagine coming in here every day. I get worried [when my daughters] bust their knee after falling over … so to do this is just a small thing."

Powell was in the Wallabies squad for most of the year, but got limited Test game time before being told to go back to the National Rugby Championship to rediscover form and fitness.

It has clouded his position in the Wallabies’ scrumhalf pecking order, with Jake Gordon appearing to move ahead of him as the third-string No. 9.

But he also has a fight to hold on to the Brumbies starting position. Matt Lucas is getting valuable game time in Japan in the off-season and Australian under-20s captain Ryan Lonergan is pushing for a Super Rugby chance.

"We pushed each other [at the Brumbies] this year, especially me and Matty. Ryan has been nipping at our heels … this pre-season he's really stepped it up. So there's going to be plenty of competition come round one," Powell said.