Potential top-three draft pick Max King hopes to be back running in about a month as he recovers from a knee reconstruction in late April.

‘‘I'm three months in,’’ King told Nine’s Future Stars program, ‘‘I'm not running yet. I'm just in the gym. I do three big sessions a week. In my off days I will be on the bike building the strength back up in my leg. Hopefully begin running in about a month or so.’’ 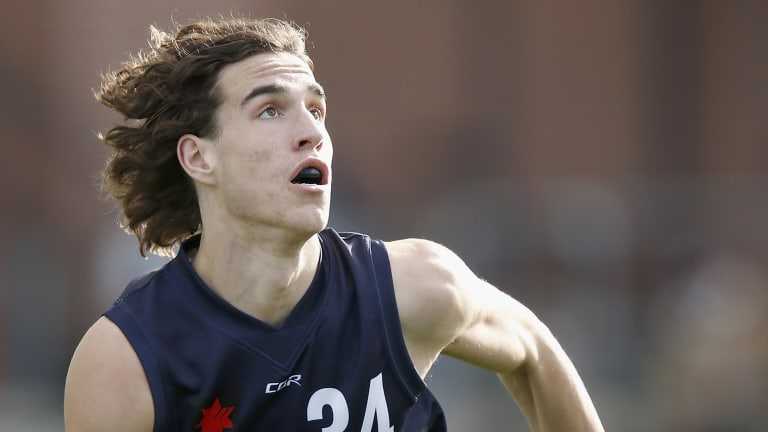 Max King in action during the 2017 under 18 championships.

King, a 200cm forward from Haileybury College and the Sandringham Dragons, had been the nominal No.1 pick this year before his knee buckled in the school’s season opener against Geelong Grammar.

‘‘The AFL clubs have been really supportive, particularly St Kilda offering me their gym to do my rehab at. That's going really well. I sort of got over that initial disappointment and I'm just enjoying getting through my rehab,’’ he said.

King’s twin brother Ben had been playing as a key defender for Haileybury, but has since moved forward and excelled for his school, club and also Vic Metro, earning selection in the U18 All-Australian team.

Asked whether he preferred playing forward or back, Ben King said: ‘‘Probably this year playing up forward, I would say I prefer playing up forward. I'm not too fussed where I play. I would be happy to go down the back as well.’’ 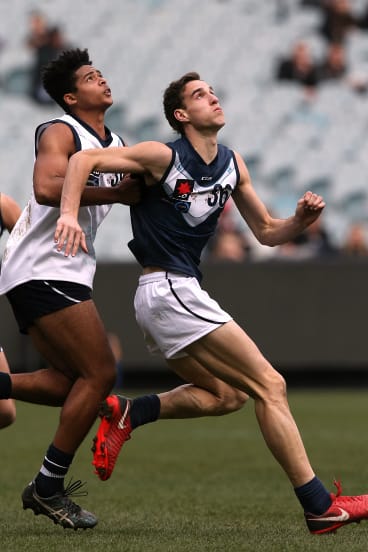 And do the brothers have any concerns about being drafted by different clubs?

‘‘The reality of going to one club, the chances are pretty slim so whatever happens, happens,’’ Max said.

Similarly the idea of heading interstate to non-Victorian club did not faze them: ‘‘Again there’s a chance that could happen,’’ he said. ‘‘We’re ready for whatever the future holds.’’