The Knicks were eliminated from the playoffs on Wednesday in a 103-89 Game 5 loss to the Atlanta Hawks at Madison Square Garden, a deflating end to a promising season.

It was a feisty, defensive battle, with both teams getting off to a slow start. But the Hawks, once again, methodically took control in the second half, led by their star guard Trae Young. He finished with 36 points.

Julius Randle, the Knicks star, struggled again. He scored 23 points and grabbed 13 rebounds, but was only 8 for 21 from the field and had 8 turnovers. 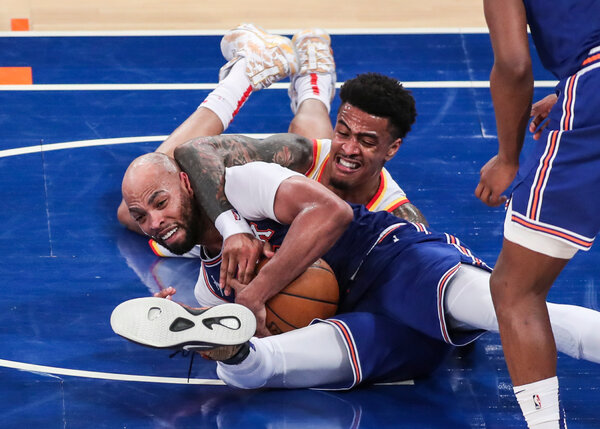 This season marked an unexpected return to relevance for the Knicks, who surpassed even some of the most optimistic preseason expectations by obtaining the No. 4 seed in the Eastern Conference and home-court advantage in the first round of the playoffs. It was the team’s first trip to the postseason since the 2012-13 season, bringing fresh optimism for a beleaguered New York City fan base.

Randle emerged as a legitimate franchise player, making his first All-Star Game and winning the N.B.A.’s Most Improved Player award. RJ Barrett, in his second season, made significant strides as a shooter and playmaker. The rookies Immanuel Quickley and Obi Toppin provided sparks off the bench.

There was much hope for the playoffs after the Knicks went 16-4 over the final 20 games of the regular season. The fifth-seeded Hawks were seen as a beatable opponent, especially because the Knicks defeated them in all three of their regular-season matchups.

Instead, even with home-court advantage, the Knicks collapsed in the playoffs, in large part because of the poor play of the starters. With several players, including Randle and Barrett, making their playoff debuts, the team looked rattled at points by the spotlight. The Knicks were also without one of their key weapons: the springy starting center Mitchell Robinson, an effective rebounder and rim protector, who had foot surgery in late March.

In the series opener, the Knicks lost at the last second on a Young floater, a shot Atlanta’s top player used to punish the Knicks all series. The Knicks won Game 2, bolstered by a deafening home crowd and a stirring second-half comeback. But they fell apart on the road in Games 3 and 4, as Young scored and created opportunities for his teammates.

Randle shot 20 for 73 through the first four games — a dismal 27.4 percent. He had almost as many turnovers (15) as he did assists (17). His performance was even more confounding considering Randle’s thorough domination of the Hawks during the regular season: He averaged 37.3 points in three matchups — his most against any team. But the Hawks flummoxed Randle throughout the series, sending double and triple teams to him on almost every touch.

Barrett was mostly ineffective as well. Through Game 4, he was shooting just 39.6 percent from the field and 27.3 percent from deep. In Game 2, the Knicks’ only win of the series, he was benched in the fourth quarter. Several of his misses in the series came on passes from Randle, which made it easier for the Hawks to continue to pressure Randle.

With Randle and Barrett struggling, the Knicks relied on a surprisingly productive bench. Derrick Rose, who only started three of the 35 games he played for the Knicks during the regular season after coming over from Detroit, was their best offensive player in the first four games. He averaged 22.8 points and 5 assists per game on 50.7 percent shooting. Knicks Coach Tom Thibodeau moved Rose and the veteran center Taj Gibson into the starting lineup for Game 3.