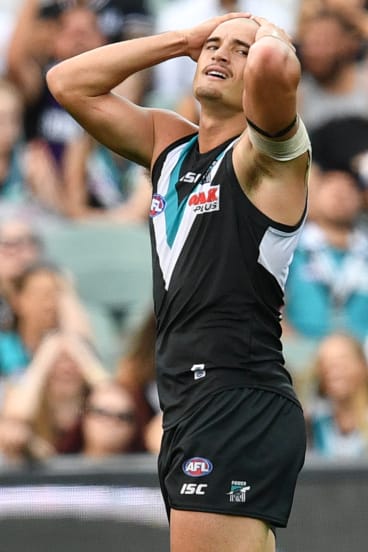 By Anzac Day, Port Adelaide and the AFL had reached a peace deal in the Sam Powell-Pepper case. On Thursday, David Koch made a provocative statement that renewed the conflict, just at the moment when his club, Powell-Pepper and the woman needed to put this unpleasant mini-saga behind them.

It is hard to fathom why Koch chose to fan the flames that had been hosed down in preceding days. The parties had thrashed out a deal in which the player would still miss a third game this weekend, but the wording of the charge against Powell-Pepper – Port’s greatest concern – had been watered down, removing any reference to sexual misdeeds.

Powell-Pepper could look forward to playing in round seven. Port officials could focus on rediscovering the form that had disappeared since Patrick Ryder went down. This distraction would cease.

It might be a coincidence that Port has slumped since this episode. But it cannot have helped the club's cause.

Then Koch opened up. He made some claims that might have merit – such as his view that the AFL’s Respect and Responsibility Policy "leaves clubs in the dark’’. But that is beside the point. His comments gave further media oxygen (including this column) to an incident that Powell-Pepper would rather forget, even if he can’t remember it.

In his statement to Triple M, Koch also made this comment, which borders on outrageous: “My biggest issue was they are railroading a kid and trying to re-build their reputation with women because of the misdemeanours of their own former executives.’’

Koch was referring to the office affairs that led to the resignations of Simon Lethlean and Richard Simkiss last year. Clearly, the AFL’s internal problems of 2017 have zero connection with allegations against a drunken player by a woman at a nightclub. One can only assume Koch’s comment was calculated to gain the maximum attention. 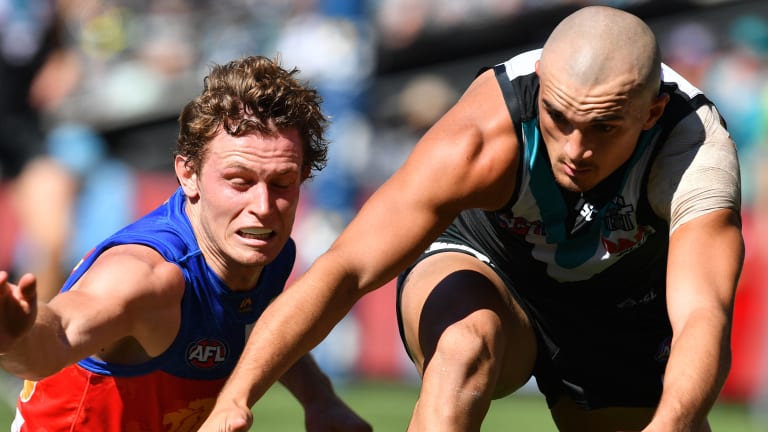 Powell-Pepper in action during round three, hours before the incident.

Port had pushed back hard against the AFL in the days before the deal was struck. Unlike a few other clubs that have taken on city hall, the Power’s combative stance won it a better outcome.Powell-Pepper had been accused of improperly touching a young woman at a night club.

In his version of events, he was too drunk to remember what had happened. The woman said he had touched her on the bottom inappropriately and, as the investigation proceeded, she is understood to have indicated she was willing to give evidence in an AFL hearing.

The CCTV footage was not conclusive, though it showed the reactions of the woman and another female friend, who was also interviewed. Port have, quite rightly, hung their hat on the fact the woman did not go to the police and that the AFL integrity unit did not refer the matter to the police.

Port and the AFL Players Association felt the investigation process was flawed, and Powell-Pepper had been denied natural justice, in part because he and his lawyers were not able to see all of the evidence investigators had gathered. Port complained it had only ever seen a summary of the evidence.

There were risks for Powell-Pepper if the case was heard – an option open to Port and the player if they really felt this was so unjust. All the evidence would have been outlined in such a hearing.

Wisely, given that there was no police in sight, that Powell-Pepper was drunk and couldn’t remember and the AFL seemed willing to amend the words of the charge, the club – unlike Ryan Burton – elected not to bump.

Koch prefers to bump, as we have seen several times in the recent past, such as when he castigated Port players for their loss to West Coast in their 2017 elimination final  and when he described a hefty loss to the Giants in 2016 as "a disgrace".

The irony is that it was a story from Koch’s own employer, Channel Seven, that put Powell-Pepper in a pickle.

Port chief executive Keith Thomas said Seven’s use of words such as ‘‘sexual assault’’ dramatically overplayed what had happened. This, said Thomas, could stain the player ‘‘forever’’.

But, for all its concerns about the process, Port did ultimately move on. Koch should follow.