Somewhere, in the tiny Fijian village of Naraiyawa, a phone is ringing. It’s the only phone in the village.

On one end of the line is Wests Tigers recruitment man Warren McDonnell, who is sitting at his desk at Concord Oval in Sydney’s west. Eventually, someone in Naraiyawa picks up. 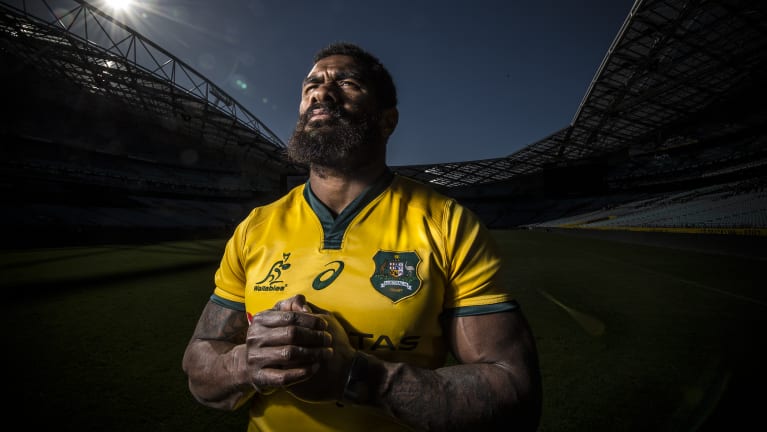 Wallabies winger Marika Koroibete … from small Fijian village to the All Blacks at ANZ Stadium.

“I am trying to get in contact with Marika Koroibete,” McDonnell says.

“He isn’t here,” replies the voice on the other end.

“Can you please ask him to be near the phone at 3pm when I call back?”

When McDonnell calls back, Koroibete doesn’t answer. He’s not near the phone. Naraiyawa is a three-hour drive from Suva, up in the hills of the province of Namosi. Koroibete’s farm is deeper into the hills.

McDonnell is desperate to speak to the young Fijian. When Koroibete came to Australia a few months earlier as part of Fiji’s touring under-18s rugby league team, the little winger had darted around the field like a pinball, almost scoring tries at will.

In one match, at Ringrose Park at Wentworthville, he scored four. Later that night, McDonnell picked up Koroibete and other Fijian officials from their modest accommodation in Redfern and took them to an upmarket restaurant in Darling Harbour.

“That’s a nice view of the city,” whispered Koroibete. It’s about the only thing the shy kid from Naraiyawa said that night. He was wearing thongs.

Now, McDonnell needs him to say more. He needs him to agree to sign a contract to play with the Tigers. Then he needs to get the contract under his nose. Then he can start on visa issues. If only someone would answer the bloody phone … 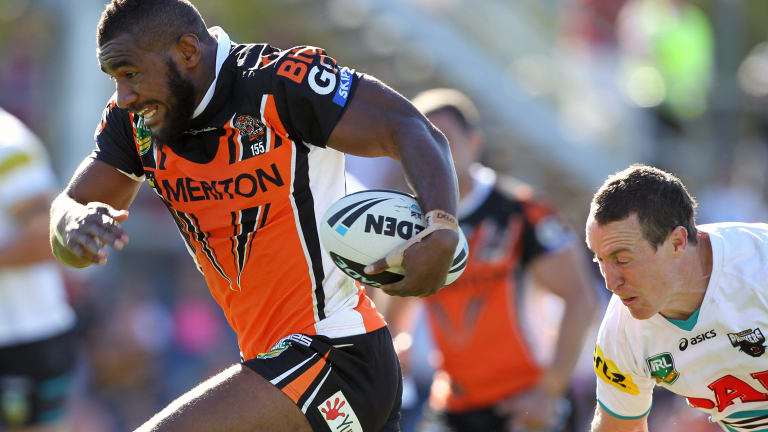 Raw power: Koroibete made an instant impact on the NRL after joining Wests Tigers.

“It was a lot of hard work just to get in contact with him,” McDonnell, who is now at the Bulldogs, recalls. “A lot of the times I’d make arrangements for him to be near the phone but he wouldn’t be there. But it was worth it.

“He was a skinny kid and he just kept scoring tries that day at Wentworthville. He was scoring tries for fun. He was that quick; they couldn’t see which way he went. From that game on, I chased him.”

That was in 2010. In the end, Koroibete did answer the phone and McDonnell got his signature. That phone call put Koroibete on a path he could only dream about as a boy, taking him to an under-20s title with the Tigers, then a grand final with the Melbourne Storm, and then a contract with the Melbourne Rebels.

This most unlikely of careers continues on Saturday night when he takes the field for the Wallabies against the All Blacks at ANZ Stadium. It will be his ninth cap for his adopted country.

“No, I didn’t think I would ever be here playing the first Bledisloe Cup match against the All Blacks,” Koroibete, 26, says. “When I first came to Australia, I didn’t have a manager. I didn’t know what a contract was. I was coming to play for Fiji under-18s — not a contract.

Koroibete says this in the restaurant at the Pullman Hotel at Sydney Olympic Park where the Wallabies are staying this week. He rolls his “r's” in that hypnotic manner in which Fijians speak. Drrrrrragons. Rrrrrrabitohs. Rrrrrroosters.

The last time he stayed in this hotel was 2016 when he was part of the Storm’s grand final side about to take on Cronulla.

Melbourne’s recruitment men were desperate to sign Koroibete halfway through 2014  even though he was playing NSW Cup for Balmain. Tigers coach Mick Potter had lost faith in Koroibete because of his problems under the high ball.

The Storm knew that could be fixed with good coaching. What you can’t coach is pure speed and that excited them. He was given a mid-season release.

At his first training session at his new club, the Melbourne coaching staff noticed a limp when their new signing started to jog. They panicked. No wonder the Tigers let him go … Then he started to run. Nobody else in the squad could catch him.

Wrongly, many people will recall Koroibete’s two-and-a-half years at Melbourne for just one play. It came after the full-time siren in the NRL grand final with the ball shifting from the right to left and then back again as Cronulla clutched onto their 18-14 lead and Melbourne tried to snatch it back.

Koroibete was playing on the left wing but had found himself on the right. The ball came his way and he surged towards the tryline but was tackled, delivering the Sharks their first premiership.

“I’ve never watched the game,” he says, quietly. “It comes up once and a while. It is something I will have to carry for the rest of my life.”

The money on offer was more than double what the Storm could even consider but the added attraction was the gold jumper.

“You could play for the Wallabies,” Ayoub told him.

“If you go back home, every kid will say they want to play for Fiji and then Australia. Not the All Blacks. We don’t like All Blacks because of sevens. They have a real rivalry with Fiji in the sevens. 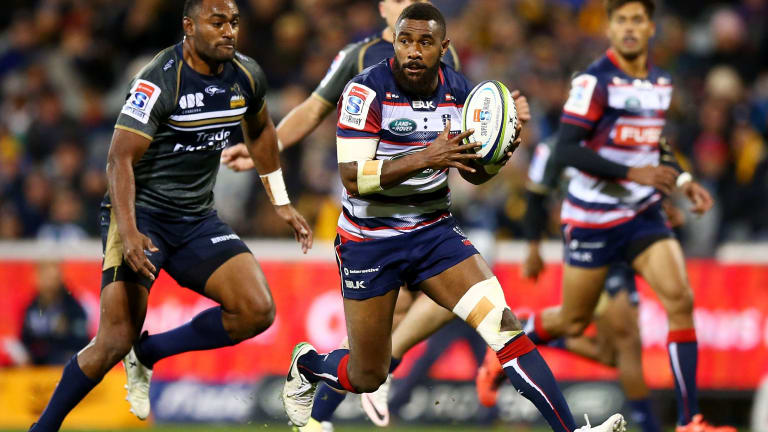 Code switch: The prospect of playing for the Wallabies convinced Koroibete to join the Melbourne Rebels.

“But I didn’t think I would ever be pulling on a gold jumper. For me, I thought it would be the white of Fiji.”

Cheika took Koroibete on the Wallabies’ end-of-season spring tour in 2016 weeks after the NRL grand final but only played him against the Barbarians.

It wasn’t until the Test against Argentina in Canberra last year that he was finally given his chance.

“The first time I pulled on the gold jumper it did feel weird,” Koroibete says. “But when you know the system and the boys well, and they feel like your family, we are all from different cultures, it’s comfortable now. A lot of the other boys grew up here. I grew up in Fiji.”

Cheika recalls the moments before that Test, too.

“We have a certain ceremony for any debutant in our dressing room,” the coach says. “I won’t go into the details but his was one that sticks out in my mind. He was excellent on the field but in accepting the cap his small but direct speech really stood out.”

Cheika won’t elaborate on what was said. All I can find out is that it left the room in stitches.

“It’s sacrosanct that part,” Cheika says. “The one thing about Marika is that how he talks is who he is. He’s direct and to the point. He’s got a lot of clarity around what he wants. He’s an easy player to coach because he knows exactly what he wants from the game.

“One thing I noticed about him in league and in union is that he’s looking for work. He’s looking for responsibility. Often you see him in the middle of the defensive line — sometimes I don’t know how he gets there — and he wants to take responsibility when the time comes.”

Koroibete’s ability to finish off a try has been there for all to see since switching to rugby; perhaps no more so than the opener against Argentina in Mendoza when he pushed off defenders and then stumbled but kept his feet to score in the corner.

But his defence has also stood out. Sometimes, he misses the mark. In the second Test against Ireland in Melbourne, with his parents in the stands watching him play for the Wallabies for the first time, he received a costly yellow card for a “tip tackle” on Irish fullback Rob Kearney.

“In league, that’s a dominant tackle,” Koroibete smiles. “I tell you what I love about league: I learnt from the Storm. You get in the tackle and give them a bit, you play with their minds a bit so next time you come they know you are coming.”

He giggles. “Cheik loves that stuff,” he adds. 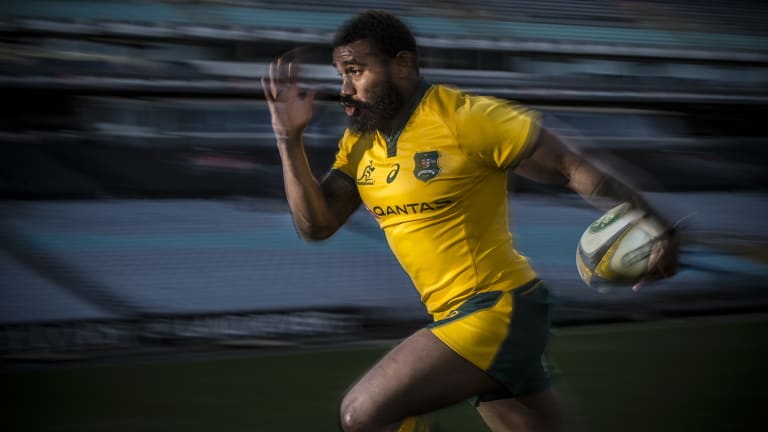 Speed to burn: Koroibete is primed to explose out of the blocks against the All Blacks.

Like the coach, Koroibete’s future beyond next year’s World Cup in Japan is uncertain.

Earlier this year, Rugby Australia wanted to sign him for three more years but he’s only taken one. He’s been linked to a return to rugby league but is already eyeing off the juicy deals in French rugby like fellow Fijian and former Parramatta winger Semi Radradra.

“If my body’s still OK for rugby league, it could be an option,” he says. “Semi is playing for Bordeaux next year. He’s been doing well. He’s been collecting cash in French rugby.

“All the boys here have been asking what I am doing. They love league. I might go overseas after the World Cup. Collecting cash before I retire."

Normally, a player talking about “collecting cash” while representing Australia would be offensive.

But then Koroibete tells you how his footy journey has allowed him to renovate his parents’ house and put solar panels on the roof alongside a satellite dish so his family can watch him play.

He tells you how the money from professional footy has allowed him to start up a business in his small village, giving his family jobs instead of just pumping them cash whenever they need it.

“I am lucky to be in this position,” he says. “All the hardship I’ve been through, my struggle my family has gone through, it’s good that it’s all paid off now and we have a better life.”