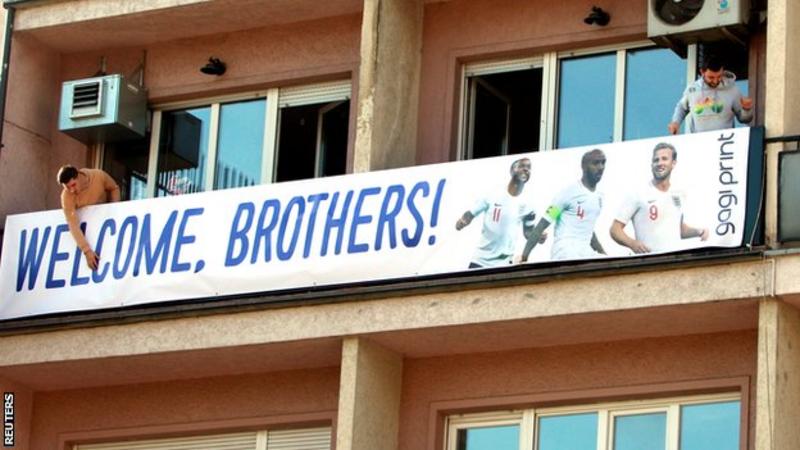 The neon sign towering above one of the main squares in Pristina reflected the excitement and anticipation surrounding England’s arrival in Kosovo for their final Euro 2020 qualifier.

It shows Raheem Sterling in action, in full England kit, accompanied by words that lit up the night in this bustling city: “Welcome Brother.”

This has been a theme of the build-up to a game regarded as one of the most important showcase moments in the history of this country, with other posters echoing the same message and banners stretching across streets here emblazoned with “Welcome And Respect” flags – with the red poppy helping to make up the word “Welcome”.

This is a very Kosovan demonstration of the fact England’s players will be welcomed here in a way they were not in Montenegro and Bulgaria, where members of manager Gareth Southgate’s squad were subjected to racist abuse.

The hashtag #equalgame is also seen around this vibrant, emerging place once you navigate through the rush-hour traffic logjam that clogs the routes into the centre, where those populating the many bars, restaurants and cafes have waited eagerly for this game since the draw was made.

It is also a reminder of the gratitude still felt here in this city and in the rest of Kosovo for the United Kingdom’s involvement in the country’s liberation after the Kosovo War.

The England party were greeted with flowers at Pristina airport and by British troops based in Kosovo – and Southgate revealed some locals were out to greet them on the route to their hotel.

Southgate said: “It has been a really warm welcome. I think this game is a celebration for Kosovo. It is a shame they were not able to qualify. I know for the players the pressure is off to an extent and they will put in a really strong performance.

“They have the chance to create a historic result and we are very confident we are going to receive a brilliant reception.”

The compact Fadil Vokrri Stadium, named after the country’s greatest player who also became a key administrator, will be the place to be on Sunday night, with 300,000 applications to find a place inside this 13,500-capacity stadium bringing the ticketing system crashing down.

Facebook was still awash in Kosovo on Saturday evening with pleas for tickets, offers ranging from exchanging a kidney to an apartment – light-hearted but a graphic illustration of the fever and demand here.

It is also understood Kosovo were happy to vacate their usual hotel base on the outside of the city to allow England to make it their headquarters – although the evidence from their first meeting at Southampton in September suggests life could well get more uncomfortable for Southgate and his players when the action starts on Sunday. 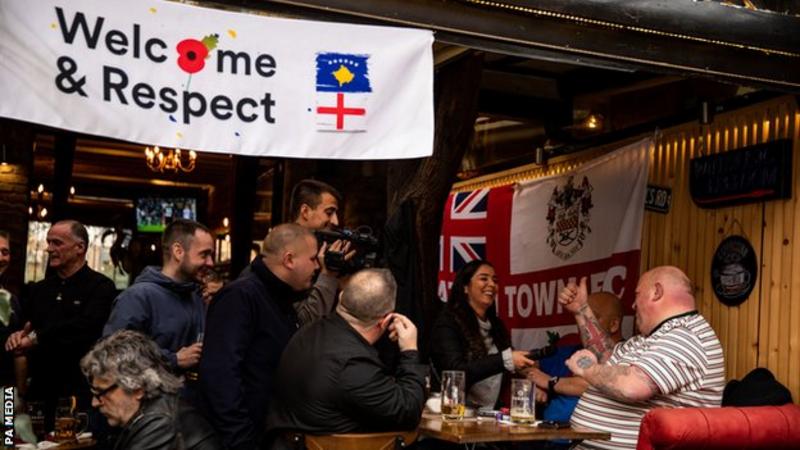 England recovered from losing an early goal to lead 5-1 at half-time, Kosovo threatening an unlikely comeback before Southgate’s side ran out 5-3 winners.

Kosovo defender Amir Rrahmani explained the wider significance of this game, one that stretches far beyond simply football – and why there is a palpable sense of anticipation here in Pristina.

“We are friendly people and of course our relationship with England and English people is very good. This is not only political but also we like the people,” he said.

“I know there has been racism at England games. I don’t know the reason but in our country that cannot happen, not just because we are friendly but because these players are idols to our people.

“Everyone is fans of Manchester City, Manchester United, Liverpool and other Premier League clubs. The people here have idols in those teams – so that will not happen here.”

There will be disappointment this game now has nothing riding on it for the home team after Thursday’s 2-1 loss in the Czech Republic ended their hopes of qualifying for Euro 2020, a game Kosovo were leading with 19 minutes left.

Despite this, there will also be a sense of celebration surrounding this game as Kosovo’s team – exciting, positive and ambitious in that loss at St Mary’s – can measure its progress against one of the main hopes for Euro 2020 in front of their own fervent support.

England will want to finish off with the victory that will ensure they are a top seed for the Euro 2020 draw on 30 November and avoid a hazardous group, with Thursday’s 7-0 win over Montenegro at Wembley confirming qualification for a tournament in which all three group games will be at home – with the semi-finals and final also on their own turf.

A point will also do that particular job but Southgate will want to end the campaign in style.

Southgate’s aim was to ensure the momentum and feel-good factor engendered by the surprise run to the 2018 World Cup semi-finals was not wasted – and they arrived here in Pristina on Saturday night with that mission accomplished.

It has not been without its difficult moments, such as that racial abuse in Montenegro and Bulgaria and the disturbance at St George’s Park last Monday that saw Manchester City’s Raheem Sterling dropped for the Montenegro game after his confrontation with Liverpool defender Joe Gomez.

Sterling returns here although Gomez stayed behind after suffering an accidental knock to the knee in a tackle with Kieran Trippier.

England have had no problems scoring goals, as proved by the tally of 33 in seven games, but it was Kosovo’s bold approach at St Mary’s that once again exposed the defensive frailties, probed further in the defeat by the Czech Republic in Prague the following month, which will snuff out their hopes next summer if they are not addressed.

Kosovo’s animated and charismatic coach Bernard Challandes underlined the difference in experience between the countries as England prepared for their 1,000th game – “we have only played 29” – but Southgate will still want to learn further lessons in their final competitive game before Euro 2020.

In the absence of Liverpool captain Jordan Henderson through illness, can Tottenham’s Harry Winks build on his good impression? And how will Southgate eventually weigh up the respective claims of Trent Alexander-Arnold and Trippier at right-back?

Harry Maguire’s place in central defence looks assured, despite his own moments of discomfort in this campaign, but Southgate will want to monitor the rehabilitation in form and fitness of Manchester City’s John Stones and discover if Aston Villa’s Tyrone Mings can build on the excellent impression he made in extreme circumstances in Bulgaria, with a mature performance on and off the pitch after he was one of the players subjected to racial abuse.

Southgate may even be tempted to ponder experimenting once more with a back three, a system he used so effectively at the World Cup in Russia to improve England in possession.

He knows he has a potent attack and must now work out how best to serve them, while also bolstering that suspect defence.

For now, the immediate priority is finishing with a flourish on Sunday in a city where England’s every move is followed with intense interest and their players are sporting icons.

This will be a night all Kosovo’s population has been waiting for – for more than just footballing reasons.