Robbie Kruse has gone from punch-ups to punching bag in the space of a decade.

It's hard to wrap your head around it now, considering all that's happened since, but the baby-faced Socceroos winger nearly threw his career away outside a notorious Brisbane pub.

Athletes regularly come unstuck at the Normanby Hotel, only a short walk away from Suncorp Stadium where Kruse made his professional debut. You can almost set your watch by it. 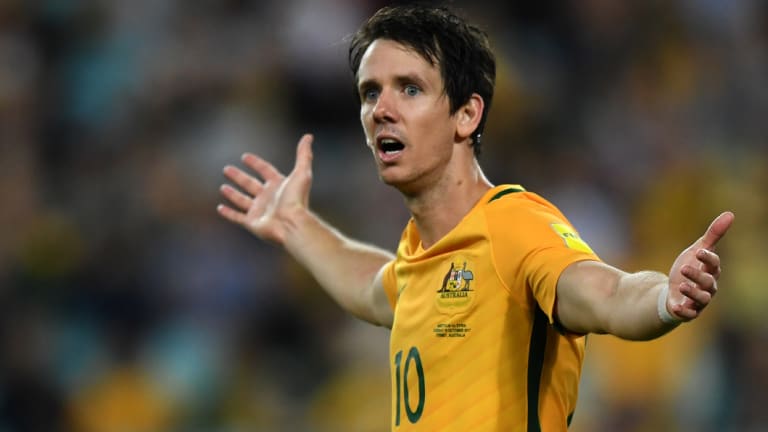 Rising above the hate: Robbie Kruse has been much maligned by Socceroos fans on social media.Credit:AAP

Rugby league players James Roberts, Darren Lockyer, Greg Inglis and Darius Boyd, and cricketer Andrew Symonds are among those on the long, long list of sportsmen who have either found or been found by trouble there.

Kruse joined that group when he was 19. He tried to skip to the front of the taxi rank outside the Normanby and copped a fist to the head in response. It was the start of a downward spiral. Despite a stern warning from his club, Brisbane Roar, he was in another fight on another night out three months later.

He was in a dark place, struggling with the pressures of fame and the fallout from a bad break-up, drinking a bottle of scotch a day to help deal with it all.

Kruse inevitably arrived at a crossroads in life after using up all of his three strikes at the Roar. When an offer to join Melbourne Victory came along, he took it, straightened himself out and … well, now look at him. 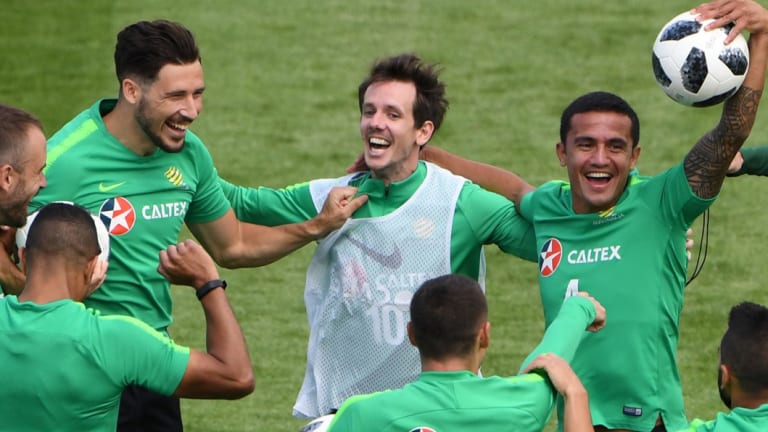 One of the boys: Robbie Kruse (white vest) and the Socceroos ham it up at the World Cup.Credit:AAP

Kruse has 70 international caps – the second most in the Socceroos' Asian Cup squad, behind only skipper Mark Milligan. He's also got a wife, a five-month-old son and a completely different outlook on things.

The Normanby was a whole other person ago.

"I was back there this time last year," Kruse, now 30, tells The Sun-Herald. "I drove past it … it's a different world; I'm in a different part of my life now.

"But it hasn't changed, that's for sure. I've got mates who still turn up there. Sometimes I sit with Mathew Leckie, because I'm really close with him, and we joke about what I was like back then. I was just a young kid, not knowing what football could really give me.

"I'm really thankful I had the right people around me to guide me out of that phase I was in. Some people don't see the opportunities you get. Fortunately, I did, and I'm here now."

Despite cleaning up his act, conflict has continued to follow Kruse. But unlike before, none of it has been of his own making.

A staggering amount of Socceroos fans simply don't like him or the way he plays and aren't afraid to make it known. Any time Kruse is mentioned in an article online, it's accompanied by abusive comments and degrading memes.

It came to an ugly crescendo at the World Cup in Russia, where his form dipped and teammates had to plead for sanity and restraint from a public that was questioning his worth – and not just as a footballer.

It'll all come flooding back when Kruse's name is on the team sheet for Sunday night's clash with Jordan, Australia's opening match of their Asian Cup defence. But coaches love him for a reason, and there may be no better opportunity for him to show that to his legion of detractors than as the wily veteran in Graham Arnold's fluid front-three system.

Australia needs him, too. With Tim Cahill and Mile Jedinak retired and Leckie likely sidelined until the knockout phase, there is a leadership void needing to be filled in attack and huge concern over where the team's goals will come from. With only five Socceroos goals to his name, that's one area of Kruse's game that can improve – and should.

But it's no coincidence that almost every manager he's played under has used him regularly, from the Roar and Victory to Germany's Fortuna Dusseldorf, Bayer Leverkusen and VfL Bochum, his current club. Not to mention the Socceroos for the past eight years. 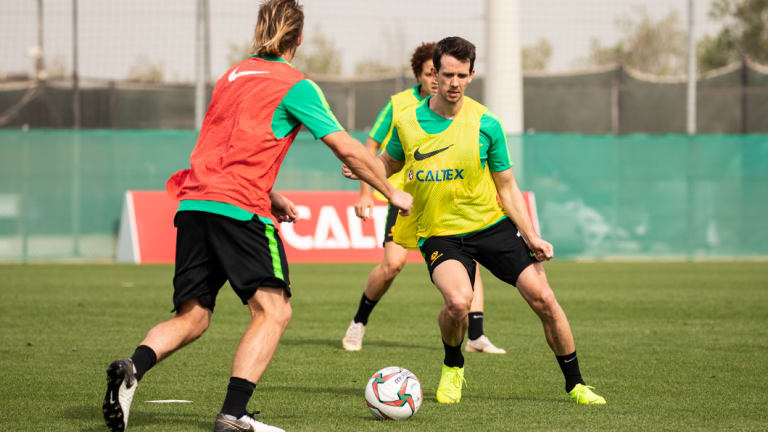 Rising in the Middle East: Robbie Kruse trains with the Socceroos in the UAE ahead of the Asian Cup.Credit:Tristan Furney (FFA)

Kruse insists he isn't interested in using the haters as motivation, but there is surely a part of him that would like to shut them up once and for all.

"I remember Brett Holman used to cop a fair bit of flack," Kruse says. "It used to be funny to me that he was copping it because he was a top player as well.

"There's always people who want to have their opinions, and they can have them. I only value the people I need to value and that's my teammates, my family, the national team coaches and my club coaches. I'm in a good headspace, it's all good by me and I'll continue to do what I've been doing for the team."

If that's the case, it's hard to blame him. Why bother when he's on such a good wicket? Unlike Aussies, German fans treat him well, and he's about to get his citizenship.

"I think I've got a couple of good years left in me in Europe," he says. "Asia is also always an attractive proposition financially. I'm just really not too pressured about coming home to play in the A-League."

The Asian Cup might well be the last we see of Kruse in a Socceroos jersey. He'll be 34 by the time the 2022 World Cup rolls around and in Daniel Arzani, Awer Mabil, Chris Ikonomidis, Martin Boyle and Brandon Borrello, there is plenty of young and hungry competition snapping at his heels.

"I'm not going to make any decisions until the end of this tournament," Kruse says. "I'm feeling all right, I'm feeling fresh. But it's always a grind when you're playing with the national team;l travelling a lot and being in Europe, it's difficult."

Arnold is confident Kruse will play a key role at the Asian Cup.

"He's in great shape, mentally and physically," he says. "The mental side of this elite game of ours is so big, so crucial. He's in a great frame of mind.

"I've got a lot of belief in Krusey. He does a hell of a lot of work for the team, he makes some fantastic runs and I expect that Krusey will have a great tournament."