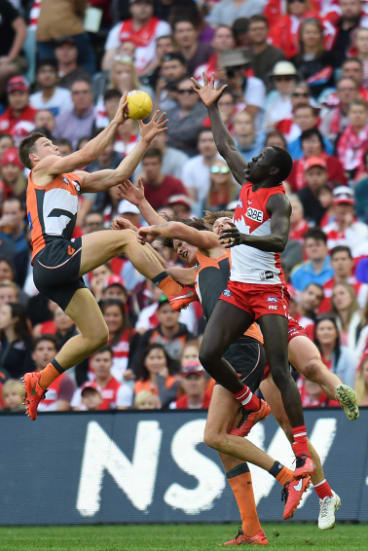 Toby Greene was cleared over this incident.

Polarising Greater Western Sydney star Toby Greene has been cleared over a pair of "kung-fu" style kicks during marking contests in Saturday's elimination final win over the Swans.

Greene, who was last year fined for a flying boot into the face of the Western Bulldogs' Luke Dahlhaus, was looked at by match review officer Michael Chrisitan for incidents involving Aliir Aliir and Nic Newman of the Swans during the game at the SCG.

However, Christian gave the green light to both of the incidents. Greene's contact in the Aliir incident was deemed to be permissible under current guidelines, while the push into Newman's torso was deemed to be below the force required for a charge to be laid.

Greene has however been offered a $2500 fine for a separate incident in which he put his knees into the head of Swan Isaac Heeney.

No players were suspended from incidents out of Saturday's two finals, with Giant Jacob Hopper and Swan Zak Jones also offered fines.