Higashioka caught Cole for the second straight start — and win — after working with him during last year’s playoffs. Gary Sanchez, the Yankees’ No. 1 catcher, was behind the plate for Cole’s first start of the season, against the Blue Jays on opening day.

Cole (2-0) allowed one run and three hits in six innings, struck out eight and walked one. The hard-throwing right-hander finished with a flurry by retiring his final 15 batters — striking out seven. With 29 strikeouts this season, he matched David Cone for the most by a Yankees pitcher through three starts.

Cole has a 1.47 E.R.A. He has struck out at least seven in his last 12 regular-season starts, the longest such stretch in Yankees history.

Robbie Ray (0-1) didn’t allow a hit before Rougned Odor singled with one out in the fifth and Higashioka followed with a 416-foot opposite-field shot to right-center for a 2-1 lead.

Higashioka made it 3-1 in the eighth on a 427-foot solo shot to left off Ryan Borucki.

Last Sept. 16, Higashioka had a three-homer game against the Blue Jays, also in a game started by Cole. Five of his 12 career homers have come against Toronto.

Justin Wilson, Darren O’Day and Aroldis Chapman completed a five-hitter. Chapman worked the ninth in his first save chance this season, and the Yankees got back to .500 at 5-5 by winning consecutive games for only the second time this season. 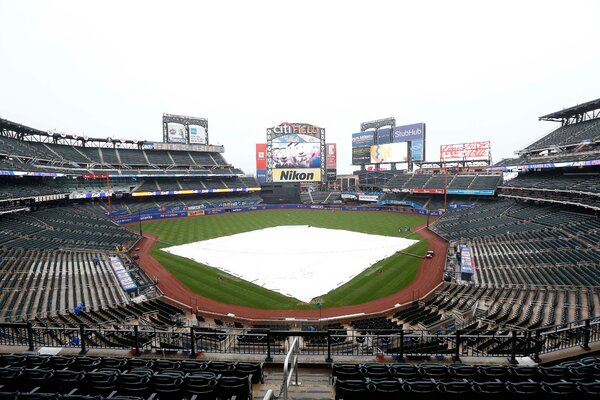 A day after pushing starter Marcus Stroman to pitch amid rain that paused play after seven minutes, the Mets called off their game Monday against the Philadelphia Phillies with another downpour en route, rescheduling it as part of a doubleheader on Tuesday.

The decision was announced about two hours before Monday’s 7:10 p.m. scheduled first pitch.

The single-admission doubleheader will start at 4:10 p.m. Tuesday, and the second game will start about 30 minutes after the first game ends. Both games will be seven innings, keeping with an adjustment introduced during the pandemic-shortened 2020 season.

The Mets have played just five games in the first 12 days of the season because of a Covid-19 outbreak among the Washington Nationals and then bad weather.

The Minnesota Twins postponed their afternoon game with the Boston Red Sox and were quickly followed by the N.B.A.’s Minnesota Timberwolves calling off a game against the Nets and the N.H.L.’s Minnesota Wild postponing a match against the St. Louis Blues.

With the region on edge as the trial of Derek Chauvin, the police officer facing murder charges in the death of George Floyd, continues in Minneapolis, the Twins said it would not have been appropriate to play. The police in Brooklyn Center, Minn., where the latest shooting took place Sunday, said that the victim, Daunte Wright, 20, was shot accidentally by an officer who had intended to use a Taser.

Read the full story on the postponements of three major sports teams.

A Controversy at Truist Park

The Philadelphia Phillies beat the Atlanta Braves on Sunday night thanks to a controversial call at home in which Alec Bohm was called safe on the go-ahead run despite not seemingly having touched the plate. James Wagner reported on the call from Truist Park: 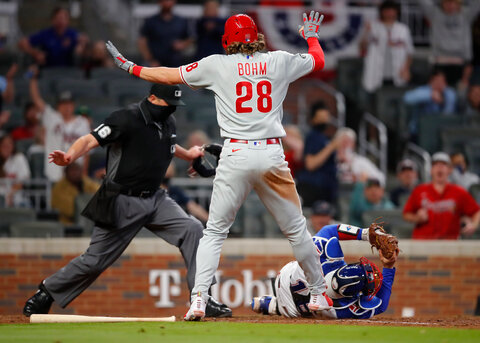 The Atlanta Braves lost to their division rival Philadelphia Phillies, 7-6, on Sunday night on a ninth-inning run in which the runner didn’t actually score.

Wait, what? See the wild ending → 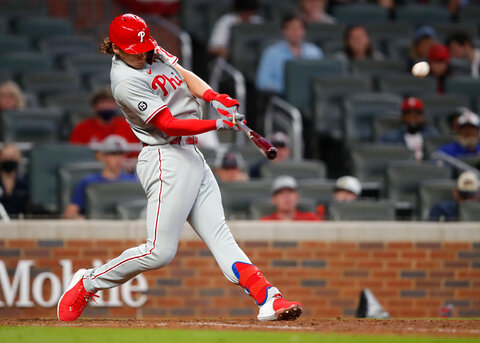 The Braves and Phillies entered the ninth tied, 6-6. Phillies third baseman Alec Bohm hit a double off reliever Will Smith and moved to third on a groundout, bringing up Didi Gregorius. 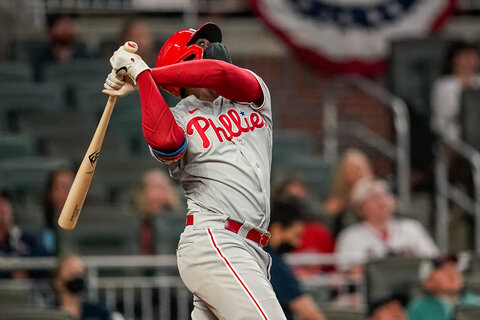 Gregorius lifted a fly to left field that he thought wasn’t deep enough for Bohm to score after tagging up. But Atlanta left fielder Marcell Ozuna has a weak throwing arm. The Phillies tested him. 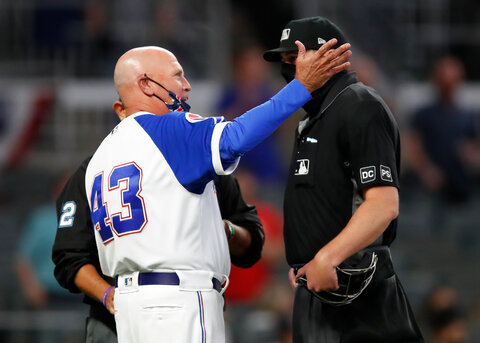 Atlanta challenged the play. Fans booed as replays showed Bohm’s foot just missing the plate. But the replay official “could not definitely determine” that Bohm failed to touch home plate. 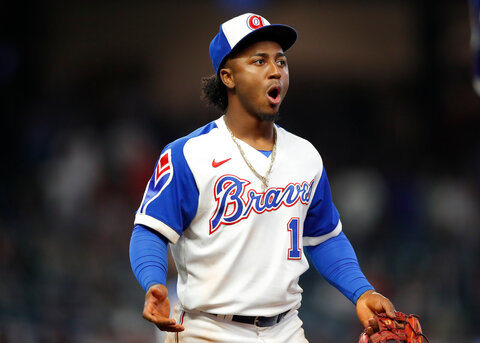 After the game, Braves players like Ozzie Albies fumed. Pitcher Drew Smyly called it embarrassing. Asked if he scored, Bohm smiled. “I was called safe.”

He called it “an embarrassing representation of our city.”

With both teams competitive in the tough N.L. East, this controversial ending could have an impact on the standings despite it being just one of 162 games.