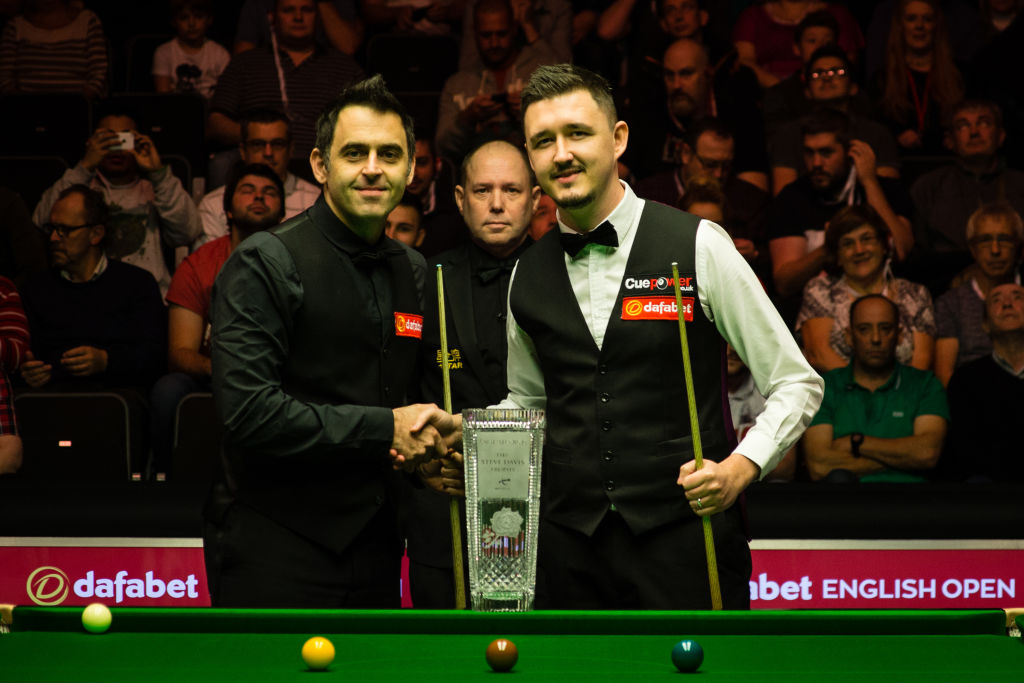 Ronnie O’Sullivan has long tipped Kyren Wilson as a winner of Triple Crown events and the Warrior says it would be ‘dreams come true’ to down the Rocket en route to his first this week.

Wilson and O’Sullivan meet in the UK Championship quarter-final on Friday and as the two highest-ranked players left in the tournament, the winner will be heavily fancied to go on and lift the trophy on Sunday.

For the Rocket that would be his eighth UK title and his 21st Triple Crown triumph, if the Warrior were to get his hands on the superb trophy, it would be his first of either.

Kyren has beaten Ronnie in big events before – the Welsh and English Opens – but nothing on the scale of the UK Championship and he says it would be absolutely ideal to down the GOAT on his way to major glory in York.

‘I always enjoy playing him because when he does eventually retire we’re going to look back on it and say: “What did you achieve against him?”‘ Wilson told Eurosport.

‘For me it’s about having that win on my CV. Obviously I’m always going to throw whatever I’ve got at anyone.

‘At the end of the day we’re all well aware that everyone’s saying that it’s Ronnie’s tournament to lose, which is rightly so with him being the highest seed, but I feel like I’m going out there with no pressure.

‘There’s no easy draws on tour nowadays, but if you can tick off the big names on the way to winning these big tournaments then they’re dreams come true.’

He added: ‘If I turn up and produce my best against the very best, I give myself a chance.’

O’Sullivan won his fourth round match before Wilson came through his so could do little to preview the match, but the Rocket has been very complimentary about the Warrior in the past.

The 45-year-old beat the 29-year-old in the 2020 World Championship final, but said he would be stunned if Kyren wasn’t lifting that great piece of silverware at some point.

‘Kyren is a top player and is improving all the time,’ said O’Sullivan. ‘He has got desire, the hunger and the belief in his ability. His fire is burning bright enough and he will get there in the end.

‘He will win this tournament one day – not to put too much pressure on him.

‘He is a country mile above everyone else his age and he always wants to raise his own bar.’

O’Sullivan was also asked about Wilson’s Triple Crown credentials at this year’s Masters and said he sees Kyren as the ideal rival for Judd Trump at the biggest events over the coming years.

‘I think when you look at the players coming through, the hardest games for Judd will be against players like Wilson, Mark Allen and a couple of the young Chinese players.

‘I think the younger players that really want to win things in the game and have got it to prove – they’re going to be Judd’s people that he’s going to find it hardest against.

‘I think you look at someone like Kyren Wilson – he would fit into that category. (It’s like): “Judd’s the yardstick and I want to get to him, and every time I play him I’m going to be up for it and he makes me get out of bed in the morning.”

‘Kyren Wilson is that type of person – very driven and a very, very good player.’

Wilson is already a four-time ranking event winner, but says a first UK title would be ‘humungous’ for him, joking that his brother has made him an unusual promise if he manages it.

‘Massive, it would be humungous for me and my family, we’ve put a hell of a lot into this game from a very young age,’ said Kyren.

‘My brother’s promised me he’s getting a tattoo of the UK Championship title on his leg if I win, so purely for that I’d love to win it.’

The pair meet for a place in the semi-finals at the Barbican at 1pm on Friday.