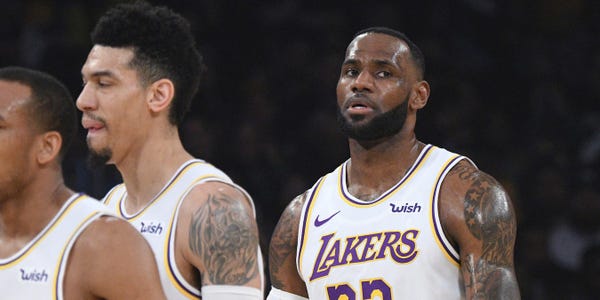 If the 2020-21 NBA season begins in December, it may be hard to get LeBron James back on the court.

After NBA Commissioner Adam Silver publicly mentioned a January start for next season, the league's board of governors has flipped on the issue. It is now reportedly targeting a December 22 start to next season. With the NBA draft being held on November 18, free agency, training camps, and preseason would need to be held over the course of five weeks to make the December 22 start.

To Lakers guard Danny Green, that is not enough of an offseason for the Lakers, who concluded the previous season on October 11.

"December 22 is not even on my mind," Green said on "The Ringer NBA Show" podcast. "I think most guys, if you say they're starting in December, I think they're like, 'I'm not going to be there.''

ESPN reported that some team owners want to keep the primetime slot of games on Christmas Day to "further realize the value of broadcast partnerships." NBA TV ratings were down significantly during the bubble, likely the result of several factors.

And while the NBA wants to avoid another bubble and understands there will be positive COVID-19 tests among players and staff members, some owners have given up the hope of getting fans back into arenas soon.

A December start date not only gets the NBA back on track to its standard schedule, but it would also wrap the season in time for the Tokyo Olympics if the games are still held in 2021.

Green said while the Lakers are not yet rested enough for a full season, he understands they may be in the minority.

According to ESPN, October 30 looms as an important date — the NBA and players association agreed that day would be the deadline to modify the collective bargaining agreement for the 2020-21 season. It is also about eight weeks from Christmas — Commissioner Adam Silver said there would need to be at least eight weeks between an agreement and the start of the season.

Green said perhaps he and his Lakers teammates would feel differently about the start date with a few more weeks rest, but as of now, they're not ready.

"I'm really hoping we don't start that early in December."

A 52-year-old Florida mother died after being run over by a van occupied by teenagers who attacked her son in her home, sheriff says