Shamet, whose previous career high was 17 points, knocked down eight of 14 shots from three-point range to set a Sixers rookie record on Tuesday. 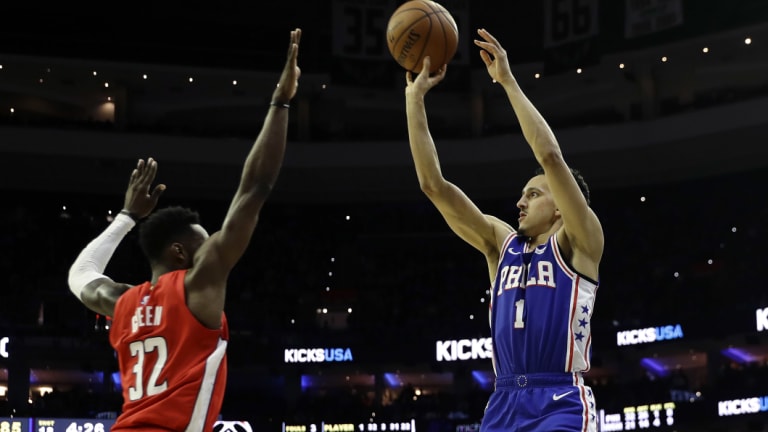 Landry Shamet scored a career-high 29 points against the Wizards.Credit:AP

Joel Embiid had 20 points and 10 rebounds for his league-leading 35th double-double and ninth in a row.

Shamet made four three-pointers in the first half, and the Sixers bolted to a decisive 68-45 advantage at half-time.

In Miami, Nikola Jokic had 29 points, 11 rebounds and 10 assists for his fourth triple-double of the season, and his basket with 2.4 seconds left put the western conference-leading Denver Nuggets ahead in their 103-99 win over the Heat.

Kawhi Leonard scored 31 points, Pascal Siakam had 13 points and 10 rebounds and Kyle Lowry scored 16 points as the Raptors earned their sixth consecutive win over the Hawks.

Thaddeus Young matched his season best of 26 points and Bojan Bogdanovic added 23 as the Indiana Pacers held on for a 123-115 victory over the Cleveland Cavaliers, who have now lost 10 straight.