Richmond’s round 18 Rising Star nominee Jack Higgins has been a breath of fresh air in season 2018 in more ways than one.

Not only has he quickly cemented a spot in the reigning premiers’ line-up as they zero in on back-to-back flags, but his post-game interviews have been some of the highlights of the year as well. 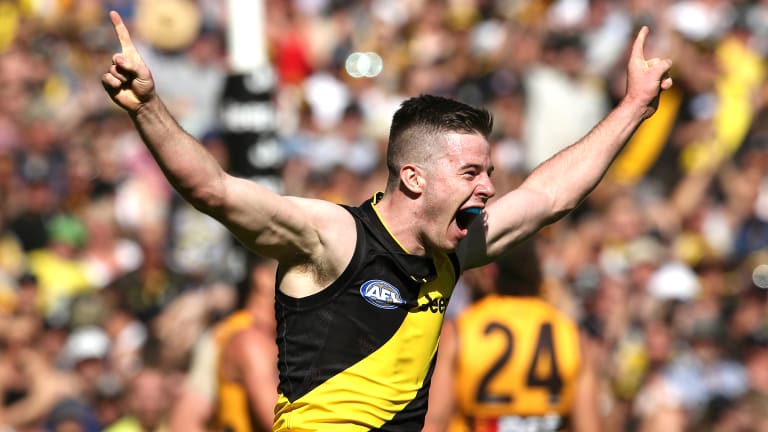 However, while the public loves watching his media performances, the player himself avoids doing so at all costs.

“I hate them,” he said at Punt Road Oval on Tuesday. “All my mates send them to me and I hate hearing my own voice. It’s the last thing I want to do. I’d rather be doing something else than listening to my own voice.”

Higgins has also been given license from captain Trent Cotchin to address his teammates during games, with the most memorable example coming during the game against Sydney in round 15 when he made the entire playing group erupt in laughter just before the second half got underway.

“It was weird how it came about,” he said. “I think he ran out of stuff to say and then he just threw it to me and I don’t think what I said was too funny but because I said it really fast and really unexpected, I think that’s why it was funny.”

Higgins, who has quickly developed a cult-like following, still cannot believe that he gets to run out onto the park every weekend with the Tigers and pinches himself every time he sets foot on an AFL ground.

Despite being considered a draft slider last year, he was rapt that he ended up with the Tigers at pick No.17.

“I love playing AFL football, especially for Richmond playing in front of 80,000 people each week every time we play at the MCG – it’s just unreal,” he said.

“When pick 17 came around last year and it ended up being the reigning premiers, I was just over the moon. Even to this day I can’t believe it.”

After having meetings with Bulldogs coach Luke Beveridge and Sydney coach John Longmire in the lead-up to the draft, Higgins thought he was destined for either of those two clubs and admitted the pair were intimidating figures.

“Especially ‘Horse’ (Longmire), when you see him on TV, he’s not harsh, he’s not angry but he’s pretty intimidating,” he laughed. “I thought maybe I’ll cop a bit of a spray but he’s a real nice guy so it was easy.”

With Richmond favourites to win the premiership again this year, Higgins admitted the possibility of featuring in a flag in his rookie year did cross his mind from time to time.

“Obviously I think about it a bit but, cliche, got to take it one week at a time and stuff like that,” he laughed.

Higgins will get an early taste of finals-like footy when his team face third-placed Collingwood in what is arguably the most anticipated match of the season at the MCG on Saturday.

“It’s like a final,” he said. “I think it’s going to be like 90,000 people or something like that so that would be the biggest crowd I’ve played in front of so I just can’t wait for it. It should be a huge game.”

Despite being a highly-rated youngster heading into the 2018 season, Higgins insisted earning a Rising Star nomination was never a priority for him but he described the recognition as an honour nonetheless.

“People came up to me and said you’re pretty close and stuff, but I’d rather team success and stuff like that,” he said.

Higgins was rewarded for his performance against the Saints last week, which saw him register 18 disposals (10 contested), four tackles, four clearances and a goal.

He has been a consistent performer for Richmond, averaging 16 disposals (seven contested) and three tackles in his 13 games and booting nine goals as a small forward/midfielder.