More big-name players could follow Melbourne Victory recruit Keisuke Honda to the A-League this season after Football Federation Australia confirmed it still has money left to spend on marquees.

Japanese superstar Honda's one-year deal with the defending champions is said to be worth $2.9 million. 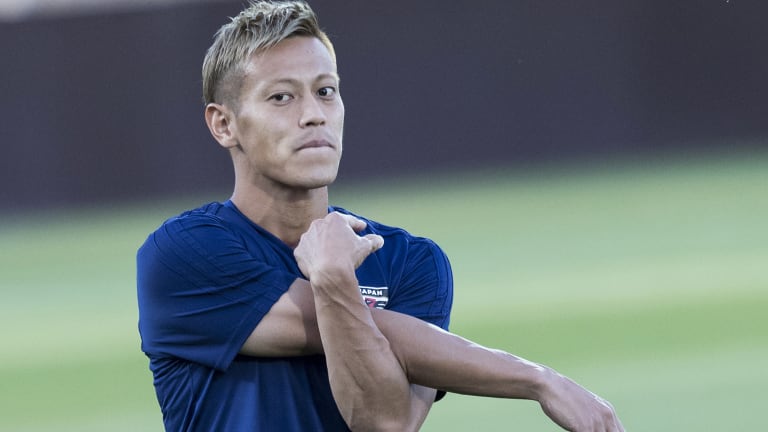 On his way: Keisuke Honda has signed for Melbourne Victory.

According to reports the club tipped in $1.3 million with the remaining $1.6 million coming from FFA's centralised $3 million marquee fund provided by Fox Sports.

If those numbers are correct, it means there is still $1.4 million available to A-League clubs who can convince FFA of the merits of contributing towards other high-profile players capable of boosting attendances, TV ratings and the broader prominence of the competition.

Despite missing out on Fernando Torres, Sydney FC are still on the hunt for a marquee and have their own money to spend after the sale of Bobo and Adrian Mierzejewski to overseas clubs.

Brisbane Roar could be the next club to take the plunge with their hopes of luring former Arsenal and AC Milan midfielder Mathieu Flamini to the A-League having been renewed in recent days.

The 34-year-old is understood to have turned down the Roar last week but had a change of heart over the weekend.

The latest pitch to him involves the potential for him to expand his business interests in Australia.

Flamini is the co-founder of a biofuels company, GF Biochemicals, which has offices or plants in the US, Italy and the Netherlands.

Brisbane coach John Aloisi refused to discuss Flamini when asked about him on Monday.

"We're looking to bring another player into the club but I'm not going to (comment) about speculation," he said.

FFA's strategy since revisiting the marquee fund concept has always been to spend the allocated $3 million on several players – not just one – in an attempt to replicate the buzz of the 2012-13 season, which featured Alessandro Del Piero (Sydney FC), Shinji Ono (Western Sydney) and Emile Heskey (Newcastle).

"We have been collaborating with the CEOs of all 10 A-League clubs for over three months about this process," A-League chief Greg O'Rourke said.

"We still have some money left in the fund. There's the potential for more players to come."

Meanwhile, Central Coast's proposed six-week trial for Usain Bolt is still a possibility – although if it happens and the Jamaican sprint star proves worthy of a contract, FFA is more likely to contribute money from their marketing budget rather than the marquee fund itself.