Los Angeles: Los Angeles Lakers forward LeBron James delivered an emotional speech honouring his "brother" Kobe Bryant prior to the first Lakers game since the NBA great, his 13-year-old daughter and seven others died in a helicopter crash on Sunday.

James began by reading the names of all nine victims of the tragedy and then throwing a piece of paper containing his prepared remarks on the court. 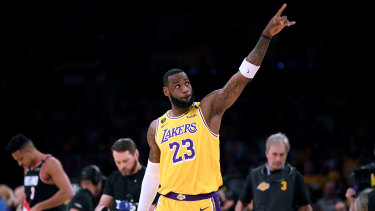 LeBron James #23 of the Los Angeles Lakers points at the two retired jerseys in the rafters to honour Kobe Bryant before the game against the Portland Trail Blazers,Credit:Getty Images

"Laker nation, man, I would be selling you all short if I read off this shit so I'm going to go straight from the heart," James said to a raucous applause from the sold-out crowd at Staples Center in downtown Los Angeles.

"I know that at some point we will have a memorial for Kobe, but I look at this as a celebration tonight.

"This is a celebration of the 20 years of the blood, the sweat, the tears, the broken down body, the getting back up – the determination to be as great as he could be," he said of Bryant, who played 20 seasons with the Lakers, 18 as an all-star, and won five NBA championships. 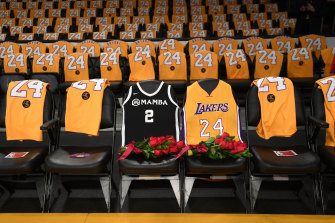 The Lakers honour Kobe Bryant and his daughter Gigi by covering the courtside seats they occupied with flowers, Gigi’s Mamba jersey and Kobe’s jersey before the game against the Portland Trail Blazers at Staples Center in Los Angeles.Credit:Getty Images

"Tonight we celebrate the kid who came here at 18 years of age, retired at 38 and became probably the best dad we've seen over the last three years," he said of Bryant, a husband and father to four daughters.

"Kobe is a brother to me … and throughout my career, the one thing we shared was that determination to win and be great.

"Along with my teammates I want to continue his legacy not only for this year but as long as we can play the game of basketball that we love because that's what Kobe Bryant would want.

"So in the words of Kobe Bryant, Mamba out," he said, referring to Bryant's famous sign off after his final game as a Laker in April 2016.

"But in the words of us, not forgotten," he said.

The Lakers ran out the 24 second shot clock on their first possession of the game and the visiting Portland Trail Blazers did then same when they first got the ball, as teams around the NBA have done since Bryant's passing.