EVERTON’S Euro charge is back on track after taking advantage of the best and worst of Kasper Schmeichel.

All the talk pre-match was Toffees boss Carlo Ancelotti’s decision to drop No1 Jordan Pickford for back-up keeper Robin Olsen for the second time this season. 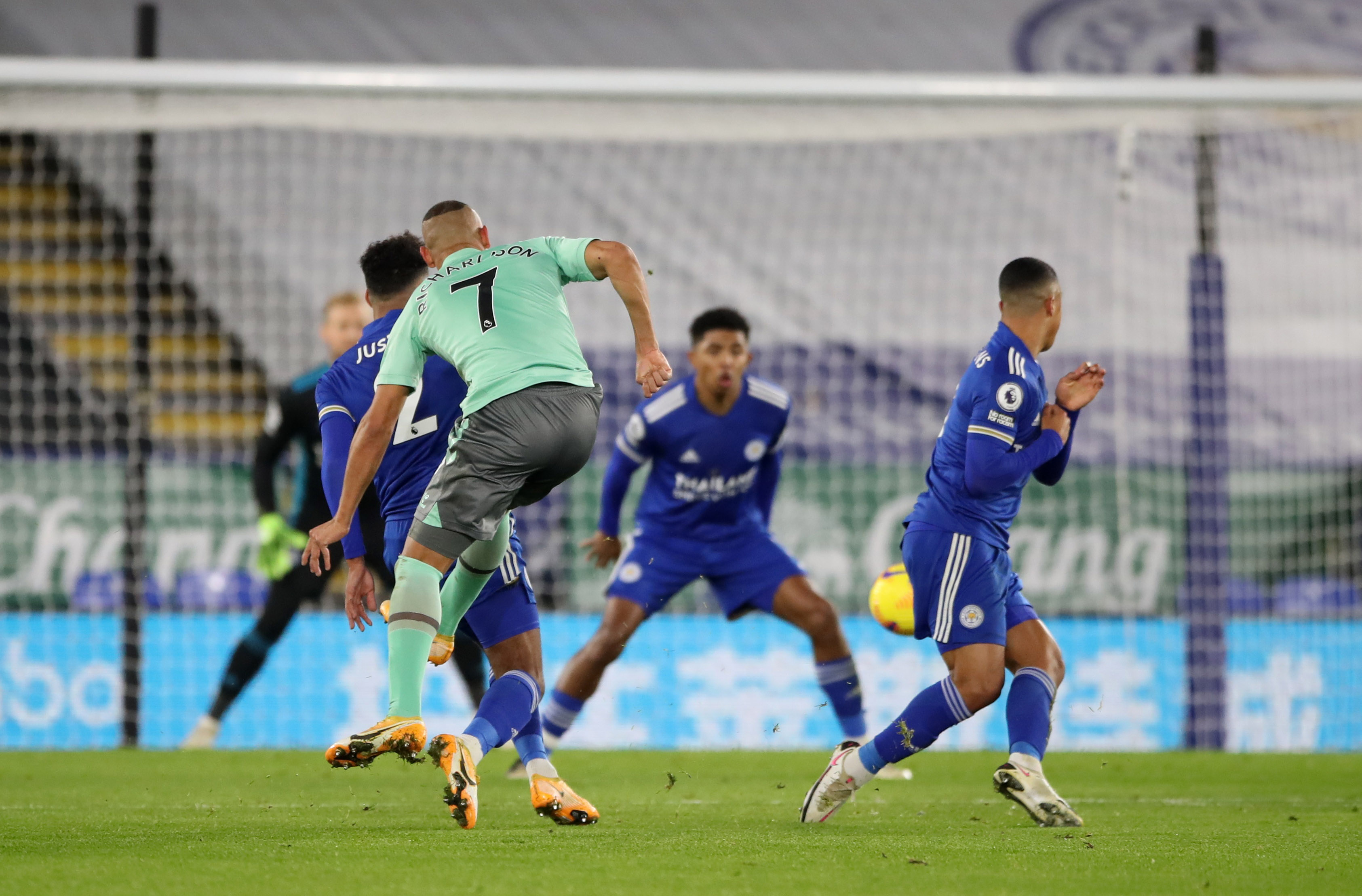 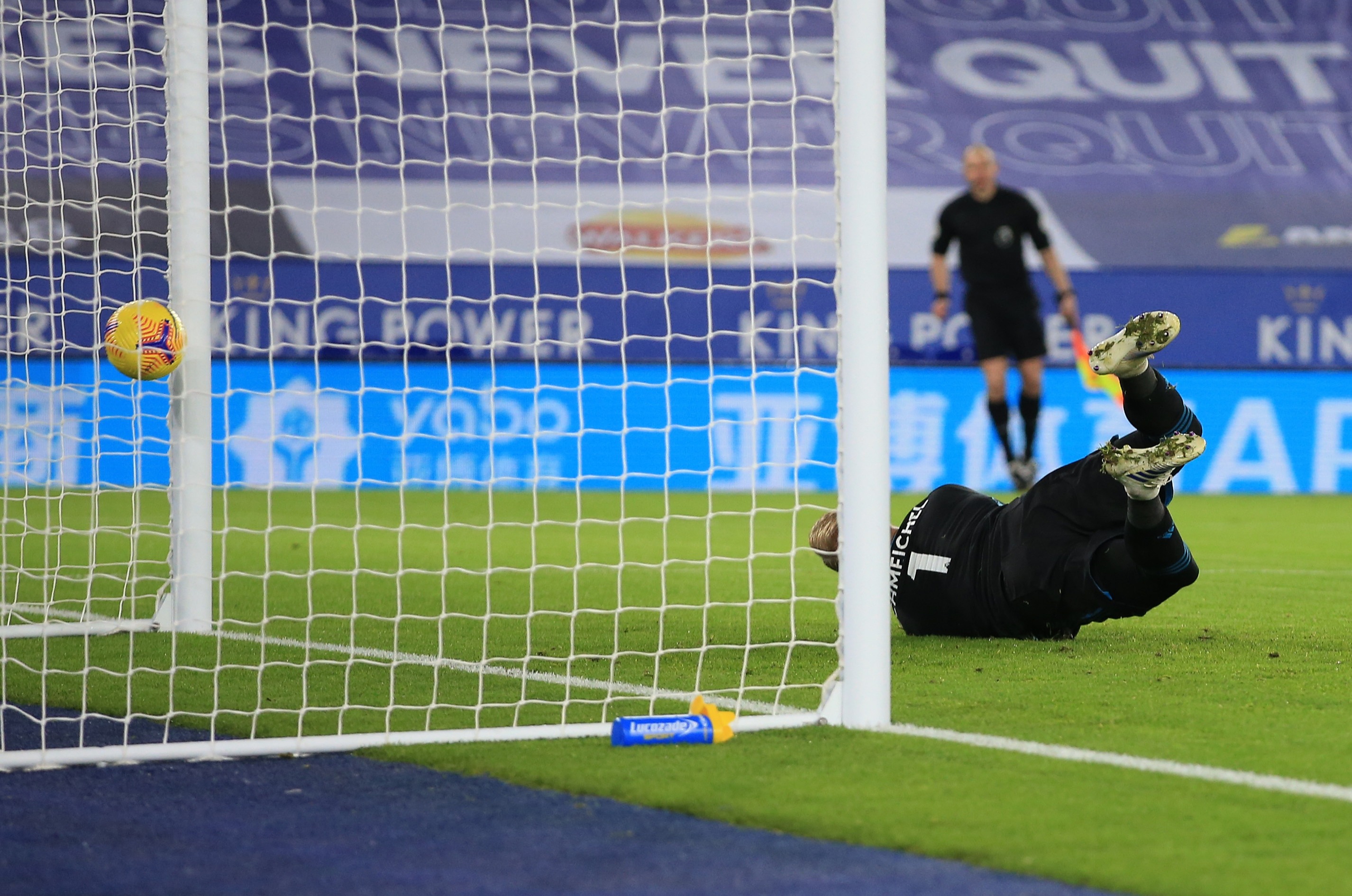 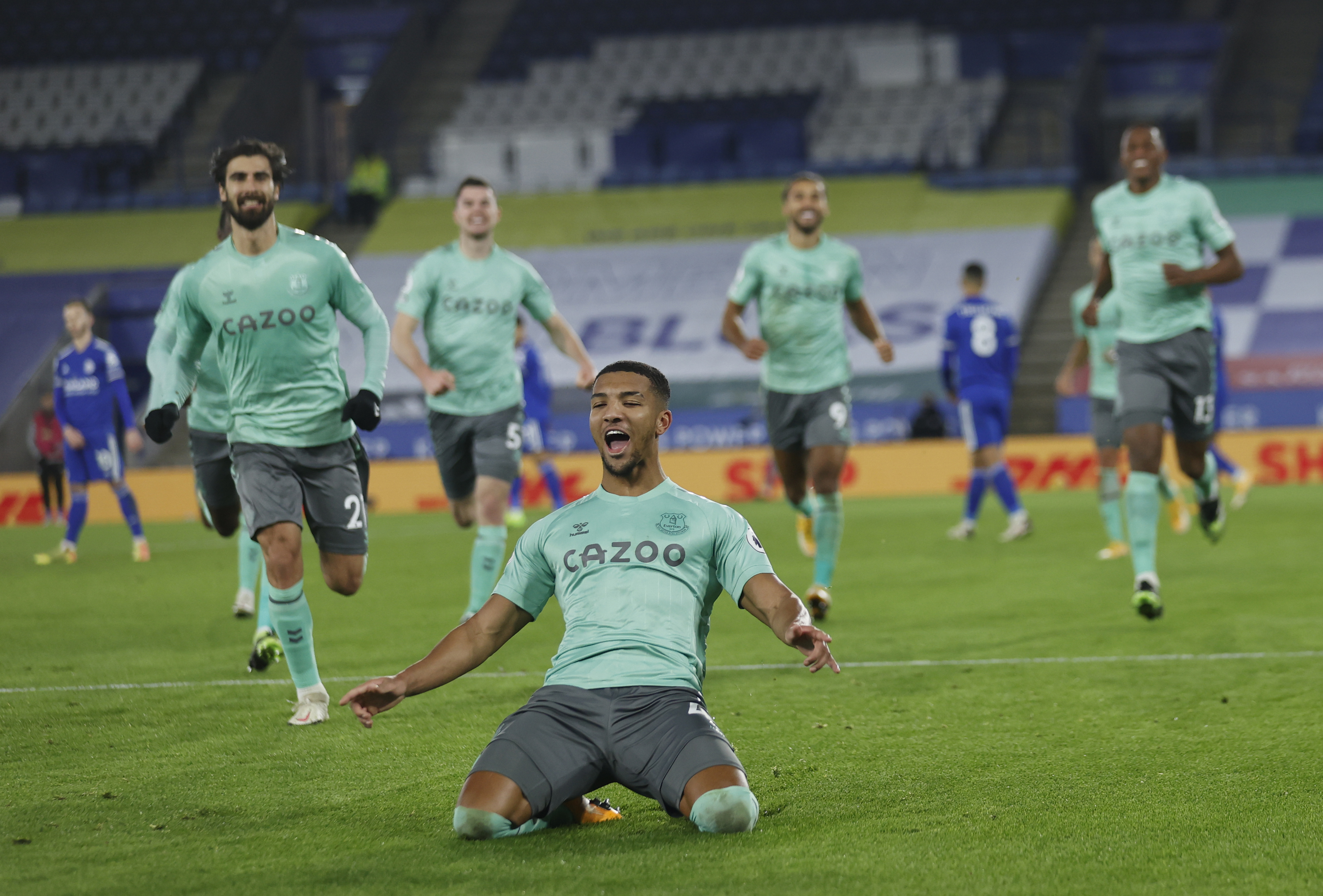 However, it was the usually reliable Foxes shot-stopper whose error cost his side after failing to deal with Richarlison’s first half long-range effort.

He then produced two wonder-saves from a second half corner, only to see Mason Holgate tap home the rebound at the third attempt.

Jamie Vardy was denied the chance to score from the spot on his record-breaking 223rd Premier League appearance for Leicester after VAR overturned a penalty, while Ayoze Perez also saw a late goal ruled out for offside.

After a worrying drop in form, Everton are now just one point off the top four in fifth with two impressive back-to-back wins against Chelsea and now Leicester.

For Brendan Rodgers’ side, the chance to briefly go top of the Prem has gone for now, but more concerns will be over their home form – it is now four losses from seven at the King Power this campaign.

This clash brought together the league’s top two goal scorers in Jamie Vardy and Dominic Calvert-Lewin – with 21 goals between them so far.

He levelled that tally four days previously in a 3-0 win over Brighton where he had just 20 touches in the whole 90 minutes – setting up two and scoring one. 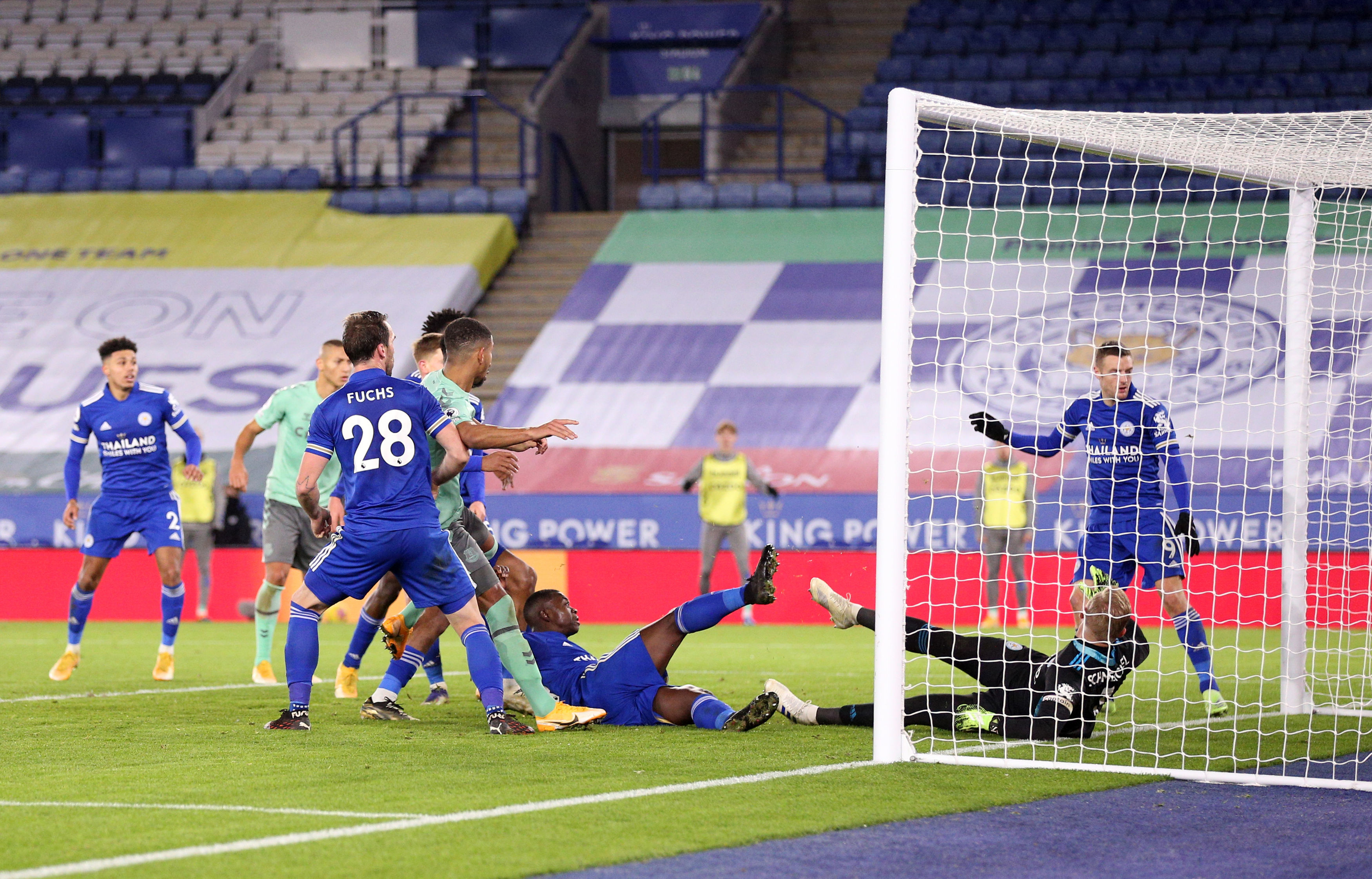 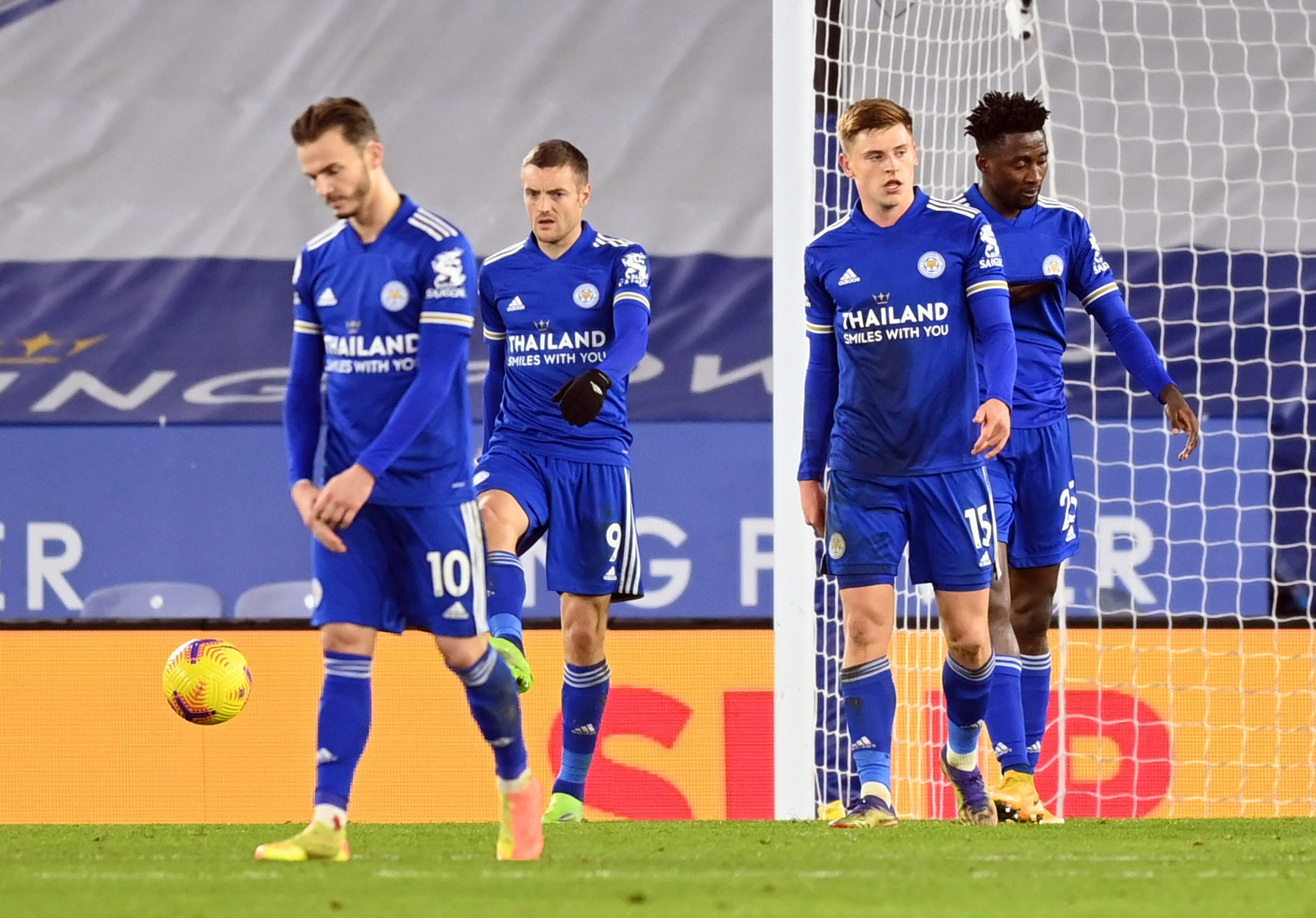 And his first touch on this occasion almost brought about the first goal – teeing up Youri Tielemans on the edge of the box to fizz a low shot past the post.

Leicester ran Everton’s midfield ragged early on with James Maddison – who scored twice at the weekend – finding pockets of space in the final third.

But Everton grew into the game, and were gifted the lead in the 19th minute after Alex Iwobi’s ball out to Richarlison saw the Brazilian cut inside and curl one from distance.

Schmeichel got a firm hand to the shot only to palm it into his own side-netting – just a second goal of the season for Richarlison and his first since September.

Leicester continued to probe and should have levelled moments later as Vardy’s header from six yards out was straight at Olsen.

Calvert-Lewin produced a carbon-copy attempt from a Gylfi Sigurdsson free-kick – but Everton then suffered a blow before the break as Allan was carried off on a stretcher with a hamstring injury.

Leicester emerged in the second half pumped up and keen to attack, but two early yellow cards for Holgate and Ben Godfrey after challenges on Maddison signalled Everton’s defensive intent. 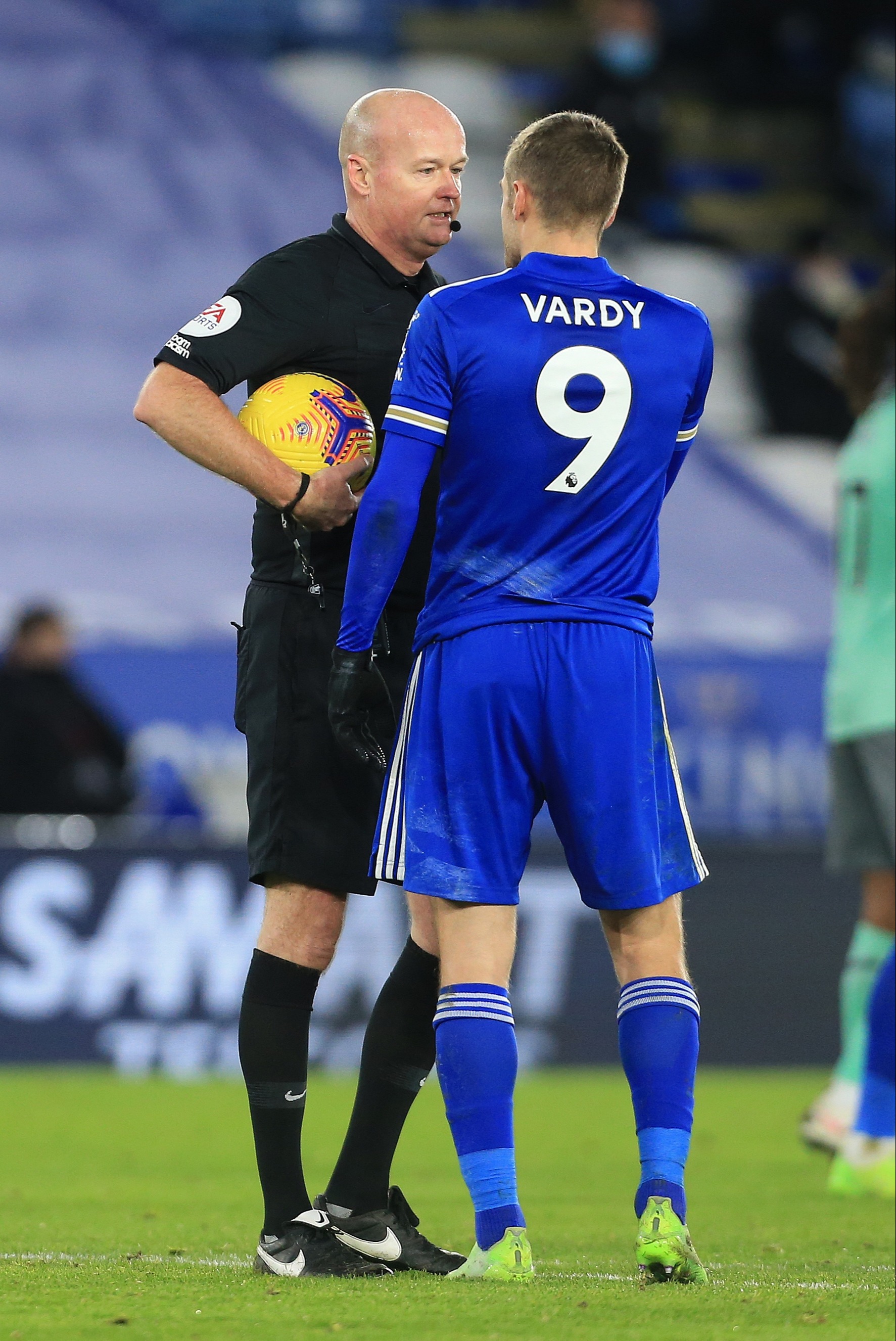 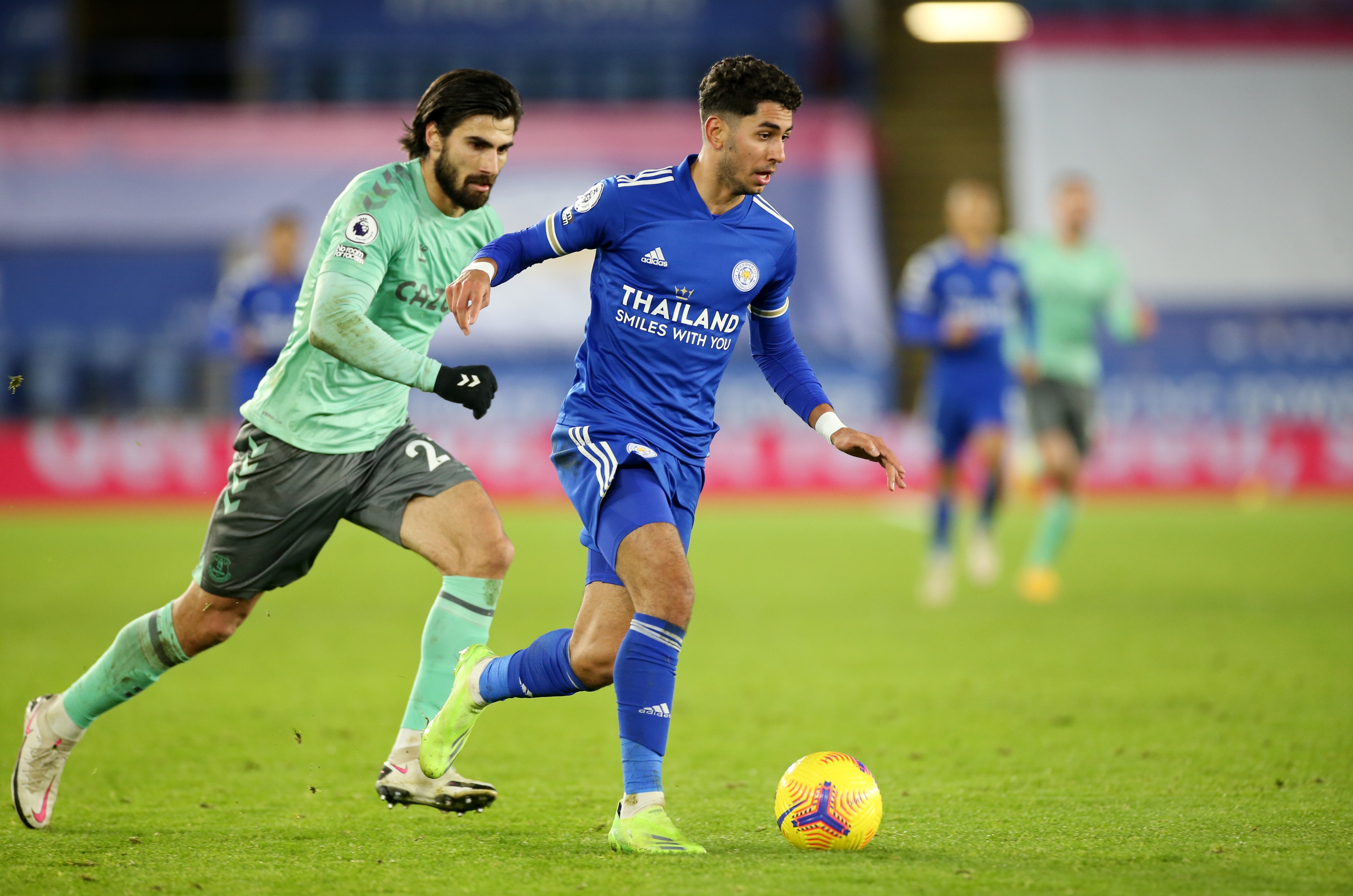 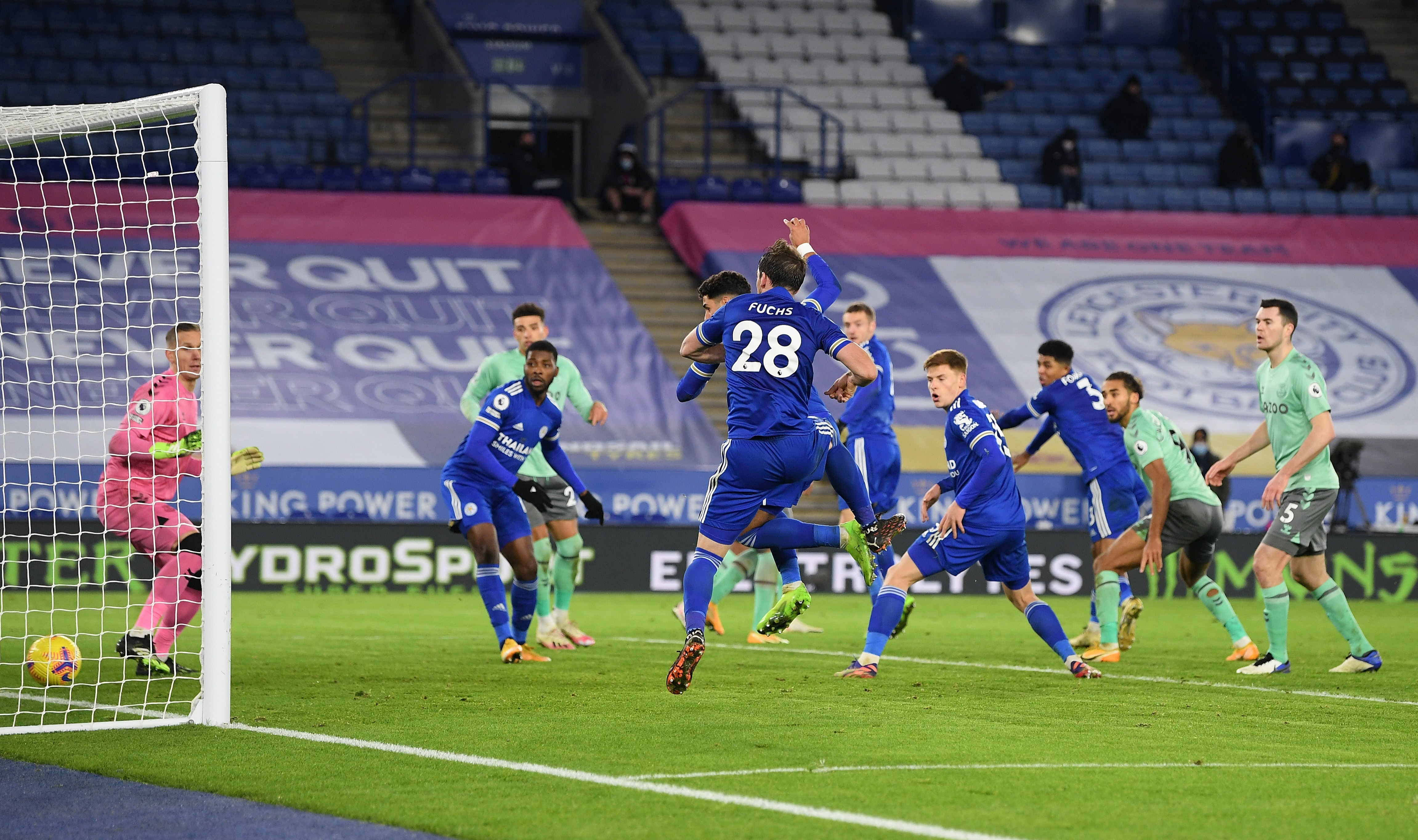 The visitors’ physicality was working, and they earned themselves some breathing space in the 72nd minute after a crazy set-piece sequence.

Sigurdsson’s corner met the header of Michael Keane which was palmed away by Schmeichel, and then somehow tipped Calvert-Lewin’s rebound onto the bar.

Schmeichel’s luck ran out however as Holgate was on hand to make sure Everton grabbed a second of the night.

Leicester thought they had the chance to stage a late comeback as referee Lee Mason pointed to the spot in the 82nd minute as Andre Gomes looked to have clipped Perez inside the area.

But replays showed Gomes just nicked the ball first, and Mason corrected the decision after a brief glance at the VAR monitor.

And their night was summed up in the dying moments as Perez guided home Vardy’s flicked header from a corner, only to be pulled back for offside.