‘The blame is 50-50’: Juventus starlet Moise Kean suffers racist abuse as he scores in win over Cagliari… but Leonardo Bonucci inexplicably accuses team-mate of provoking fans

Juventus forward Moise Kean was subjected to racist abuse from the stands as the Serie A leaders won at Cagliari, but was accused of provoking the fans by team-mate Leonardo Bonucci.

The Italy international was abused all night by sections of the home support, with monkey chants aimed at him, but took a stance of defiance after scoring a late second goal.

The teenager stood at the post, his arms aloft in response to the chants in the stands. 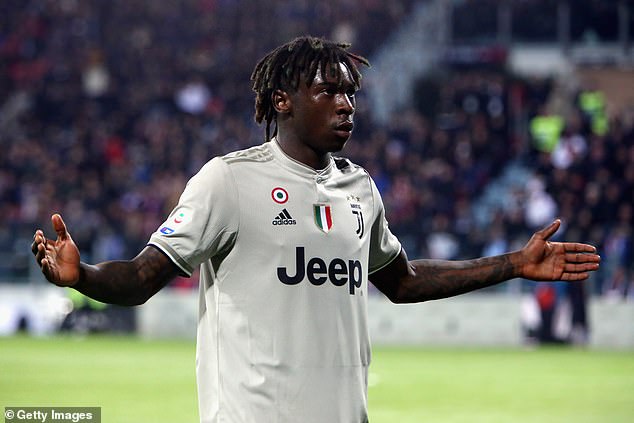 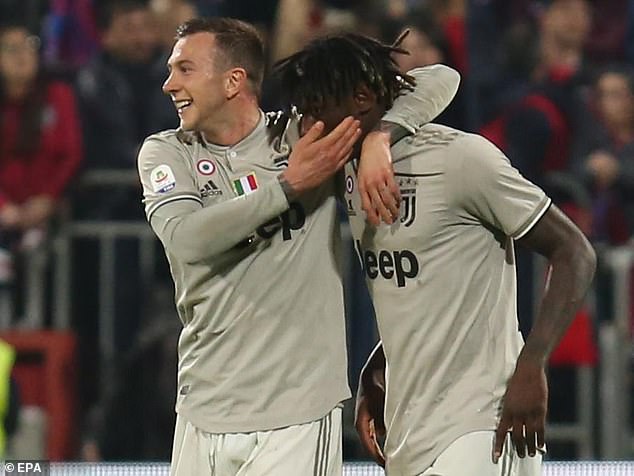 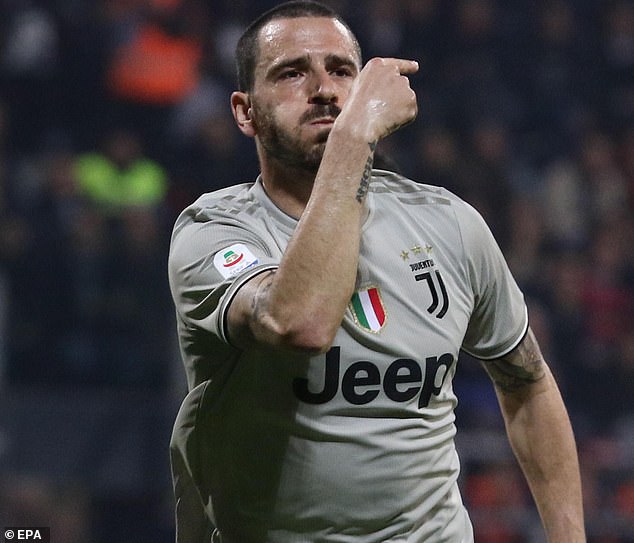 Juventus players, led by captain Giorgio Chiellini, protested to referee Piero Giacomelli, who was also in conversations with both managers.

Cagliari skipper Luca Ceppitelli went over to the fans behind the goal, appealing for the chants to stop, while France midfielder Blaise Matuidi appeared to gesture to manager Massimiliano Allegri he should take his players off.

When play did continue, an announcement went out over the public address system to highlight the issue, which was greeted by more jeers from some home supporters before the final whistle came after five minutes of added time.

The incident comes eight days after England players were subjected to racist abuse during their Euro 2020 qualifier in Montenegro and on the day UEFA president Aleksander Ceferin insisted referees would be told to be ‘brave’ and halt matches to stamp out such abuse from ‘loud, aggressive and primitive’ people.

Kean’s goal added to Leonardo Bonucci’s towering header in the 22nd minute, but the Italian defender decided to criticise the teenager for provoking the confrontation. 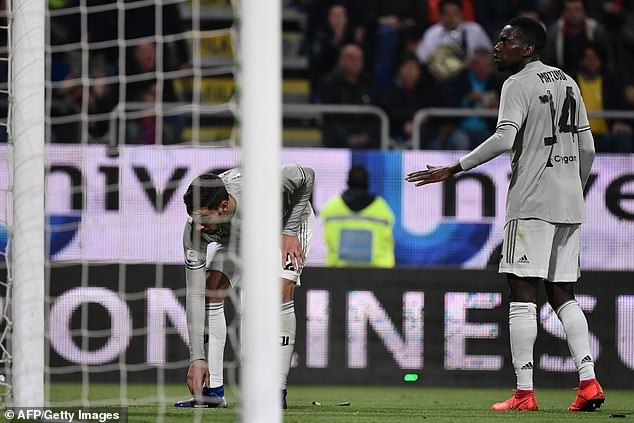 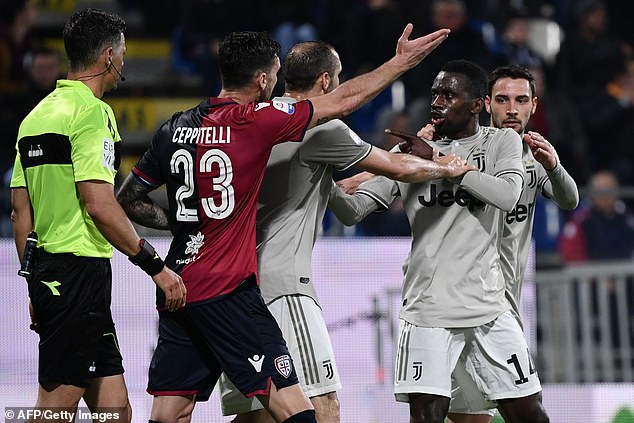 ‘Kean knows that when he scores a goal, he has to focus on celebrating with his teammates. He knows he could’ve done something differently too,’ Bonucci told Sky Sport Italia.

‘There were racist jeers after the goal, Blaise heard it and was angered. I think the blame is 50-50, because Moise shouldn’t have done that and the Curva should not have reacted that way.

‘We are professionals, we have to set the example and not provoke anyone.

‘I prefer to talk about the great performance. We were aggressive on the wings, as we knew they could cause problems with crosses.

‘We knew Cagliari do zonal marking and leave that gap open, so we’d practiced in training yesterday and it worked out perfectly.’

Blaise Matuidi defended Kean, posting on Twitter ‘White + Black #NoToRacism’. Kean called it ‘the best way to respond to racism’ when he posted on Instagram. 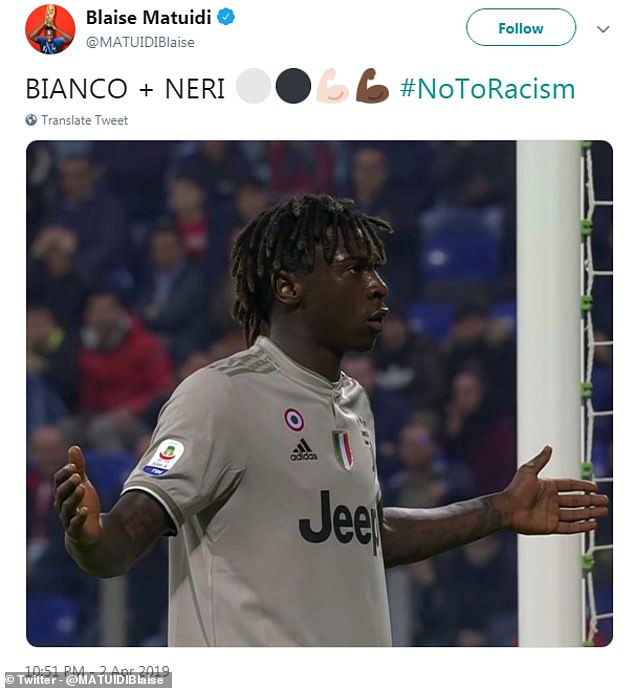 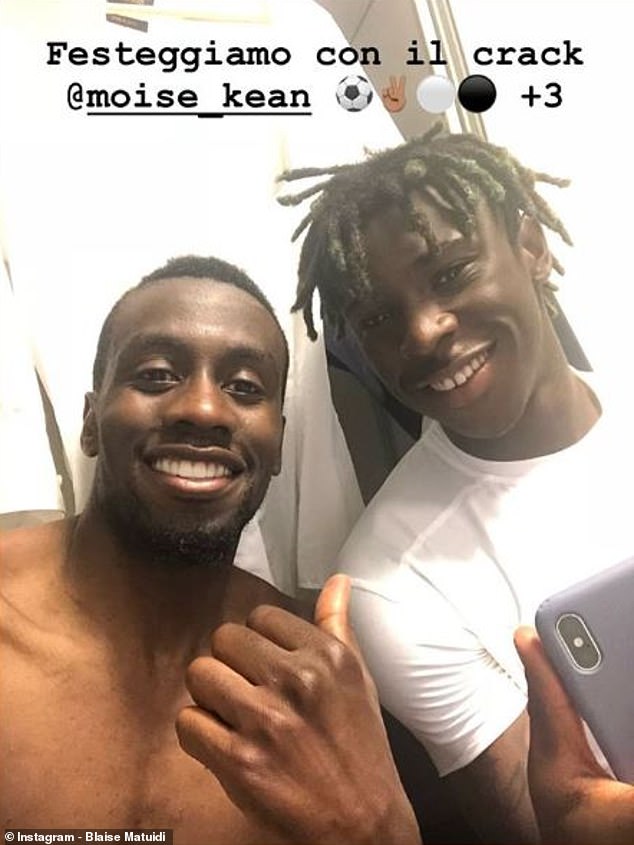 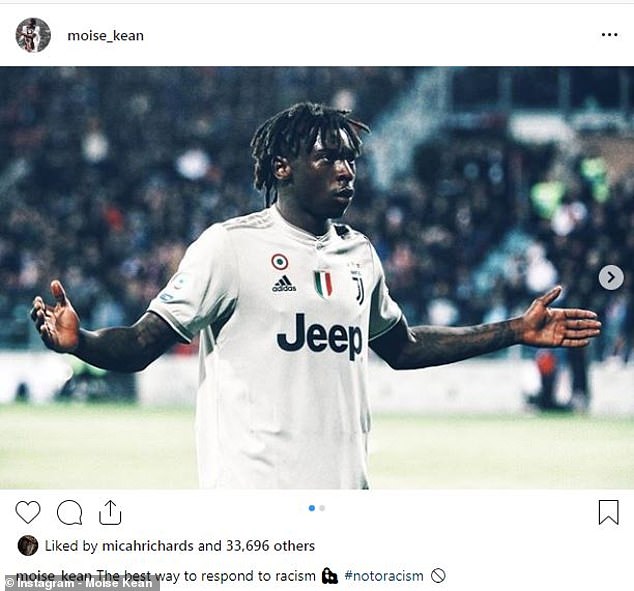 ‘I won’t justify what happened, as usual there were idiots and there were normal people,’ coach Massimiliano Allegri added.

‘We need to find them and kick them out of the stadium … there are ways to do that, if they want to they can do it.’

‘I don’t want people to start being self-righteous about it, because I heard that already, whereas Juventus players came to me afterwards and confessed Kean was wrong to celebrate that way.

‘We cannot go around calling the entire Cagliari crowd offensive things. If there were racist jeers, then our fans got it wrong, but it happened because of the celebration and would’ve happened even if the goalscorer had a different colour of skin.’