Former Test vice-captain Shane Watson says the game's authorities must take into account the psychological toll of a heavy schedule on players, weighing in after Steve Smith revealed that mental fatigue after the Ashes last summer had led him to make some "horrible decisions". 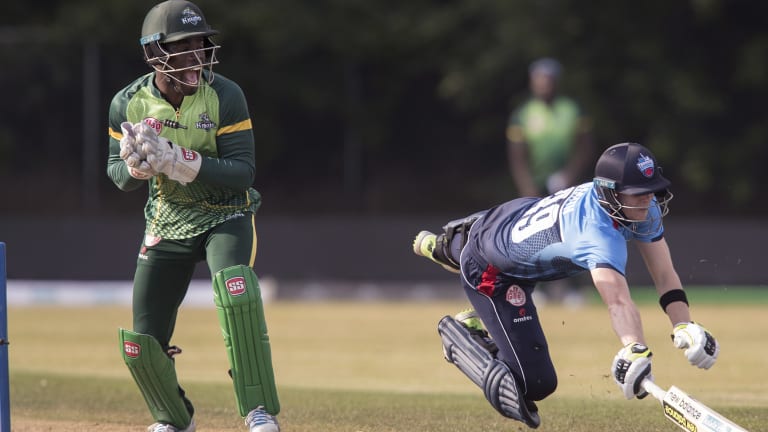 Back in action: Steve Smith dives for the crease during his half-century north of Toronto.

The suspended former Australian captain had noted on the eve of the now infamous third Test at Newlands that he had been struggling mentally. After scoring 61 from 41 balls in his return for Toronto Nationals on Friday, Smith told of how drained he had been following Australia's 4-0 win in the Ashes.

"I think I needed a break if that makes sense," he said.

"It’s obviously come under some ordinary circumstances but I was really mentally fatigued after the Ashes … I think back to the one-day games after the Ashes and I don’t think I’ve ever hit the ball that bad in my life.

"I was making horrible decisions and just felt horrible at the crease. A bit of a break perhaps isn’t the worst thing."

Having averaged only 20 in the one-day series against England in January and been clearly battling to cope with the demands of a long summer, Smith was given a breather for a T20 tri-series also featuring England and New Zealand and the captaincy was handed to David Warner.

But the Australian Test squad was soon off to South Africa for a bitterly contested four-match series that careered off the rails.

"It's not until something like this happens that you realise that if people are mentally fatigued, things can slip through the cracks and obviously this was a catastrophic event from their point of view because now [Smith and Warner] are sitting out for 12 months," said Watson, who has signed a two-year contract extension with Sydney Thunder in the Big Bash League.

"Of course you're never ever going to knock back the chance to play for your country so you're always just going to go on with it and keep playing.

"There's no question the schedule is always incredibly challenging … especially after an Ashes series which is incredibly mentally draining with the pressure that's on for that whole series, and unfortunately that's just the reality of playing international cricket.

"Cricket Australia and the [Australian] Players' Association and also world cricket have got to find the balance between just playing non-stop, filling in the schedule every time there's a bit of a gap and actually providing breaks here and there to be able to just give the guys a mental break, let alone a physical break."

Smith was captain of Australia across all three formats of the international game, something which may not happen again. There are those in the Australian set-up who believe it is better to have different captains for the Test and limited-overs sides as England do.

World cricket authorities have moved to give greater context to the international game in the recent release of the Future Tours Program for 2018-23. This should help allay fears held by players unions of overlapping tours, which have occurred in the past two years for the Australian team.

Smith and vice-captain Warner both copped 12-month bans from international and domestic cricket for their roles in the ball tampering saga, while Cameron Bancroft was suspended for nine months.

Watson, an ACA board member, will play alongside Smith for Sutherland in the Sydney grade cricket competition this summer and believes he can make a successful return to the Australian team next year.

"Steve [Smith] is a very impressive guy, and what happened was not ideal but he'll come back much better out of it and I'm sure it'll be a huge learning experience for him," Watson said.

"He's always known how to score runs and I'm sure he'll always continue to do that.

"He's a very good leader and this is only going to make him an even better leader, from a personal point of view but also the teams that he looks after and that he leads.

"Everything that happens in your life, even though sometimes things don't go exactly to plan, it only makes you stronger because of those experiences. The thing that disappoints me about the whole situation is that Steve Smith and Dave Warner, those two guys in particular, are over promoting other tournaments.