After winning their fourth A-League title in 13 years, Melbourne Victory will have a target on their back in the news season, which kicks off next week.

But skipper Carl Valeri is confident that the club, with several new faces aboard, can measure up. 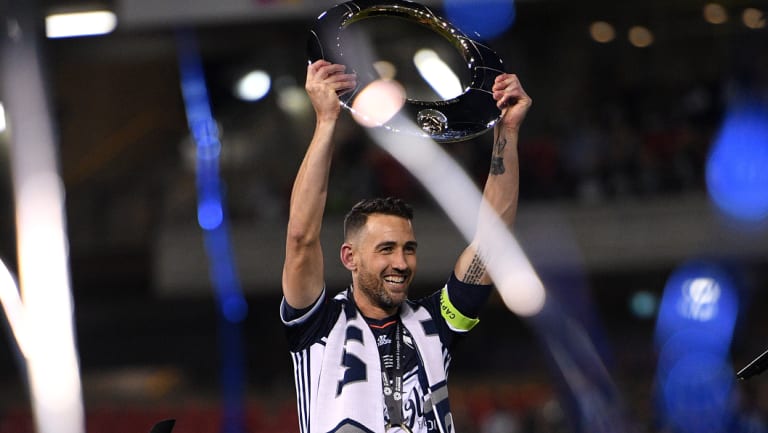 Melbourne Victory will be the hunted this season after winning their fourth title in 2017-18.Credit:AAP

The addition of the likes of Keisuke Honda and Ola Toivonen will seriously boost their attacking prospects, while Spaniard Raul Baena and German Georg Niedermeier will bolster their defensive areas.

''It's a long pre-season but I think we got a lot of work done in it and we will see the results of that through the season,'' Valeri says.

''We learnt a lot of lessons last season, the core group has remained and we can pass that on to the new players and we are going to be playing a different style.

''Kevin [coach Kevin Muscat] has alluded to that. It's an exciting style, but the core principles of the way we played are the same. We are going to take it step by step and what a first step in the derby.

''We brought in some more attacking players, we have Keisuke, we have Jimmy [Troisi] there too. Keisuke can cover various roles, he's an amazing footballer. I really rate him, I always have, and seeing him train, his touch, it's a pleasure to watch. I am looking forward to how he implements it into the A-League. ''

At heart though, Victory will still be a reflection of their coach, who took no prisoners when he was a player.

''The DNA will be the same. We will be an aggressive team, putting on pressure, we like to press teams and really try to control the game. It will be a bit different positional wise.

So what were the lessons Victory learnt?

''I think that we can't afford any inconsistency, we have to stamp it out straight away. When you are doing your pre-hab every little thing, every little detail matters. That's what we are really focussing on.

''It's great to have Ola, Georg, Keisuke and Raul coming in. They bring a real professionalism with them. I am not just talking about stretching after training.

''These guys are 24/7 footballers. It's great, it's really refreshing for me to see them come in and see the way they work. It's going to help me, improve me as a player. I know I am coming to the end. I think if everyone has the right mentality it will be an exciting situation.''

Victory kick off their title defence on Saturday night with a blockbuster at the newly named Marvel Stadium when they take on Melbourne City in the first of three Victorian derbies this season.

After that they will take on Perth Glory before a grand final rematch with the Newcastle Jets.