The Autumn Sun left most at Caulfield on Saturday convinced the colt would be a worthy rival for champion mare Winx in the Cox Plate at Moonee Valley on Saturday week.

I have been at about the past 40 Caulfield Guineas, a race that has produced some outstanding horses, and The Autumn Sun was just as good, if not more impressive, than the more recent best, which includes Weekend Hussler, Lonhro, Mahogany and goes back to Manikato (1978) and Luskin Star (1977). Asked about the clash with Winx after Saturday’s triumph, jockey James McDonald beamed: "I’d run him." 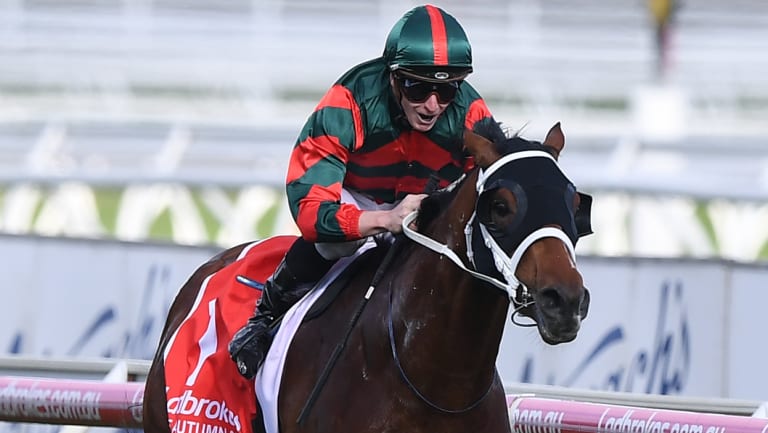 Shining: The Autumn Sun, ridden by James McDonald, was an impressive winner of the Caulfield Guineas.Credit:AAP

McDonald conceded he didn’t think The Autumn Sun would begin so well, which forced him to travel wide without cover, yet he still donkey-licked rivals, including previous group1 winner Oohood.

In the subsequent media scrum, trainer Chris Waller said of the possible clash: "I’m a punter at heart. I’m addicted to the sport and The Autumn Sun is one of the horses that makes you go, ‘Wow’. But I’m not afraid to run my horses against Winx."

Alas business, in the form of stud value, comes into play and cuddling winning streaks against chumps is more important than the awesome contest.

The meeting of Winx and The Autumn Sun, supported by the highly talented newcomer Benbatl, which raced up to his standing on Saturday as the second highest rating import to come here, would be the Cox Plate of the century.

The Caulfield Guineas has been an excellent precursor of stud value. Redoute’s Choice, sire of The Autumn Sun, scored in 1999, accounting for Testa Rossa and Commands, which also left their mark on Australian bloodlines.

Redoute’s Choice took on Sunline in Moonee Valley’s weight-for-age championship of Australia, which now includes other countries, in 1999 and was beaten but it didn’t do any harm to his worth as a stallion.

Should the connections go along sporting and not business lines, it will be the first time since the 2016 Doncaster that Winx has to give weight to an opponent of substance. The Autumn Sun would have only 49.5kg compared to her 57kg.

No doubt the mention will arise that the colt will be better when he matures further but then he will carry more weight. Unfortunately, cotton-woolling of the exceptional has come into vogue in more recent decades.

Tulloch had 15 starts compared to The Autumn Sun’s five before his 1957 Caulfield Guineas, which was followed by the Caulfield Cup demolition, a harder assignment than the Cox Plate.

The Autumn Sun rang the bells on a memorable Saturday, one of my top Caulfield Guineas programs, with the visitors showing they are going to play a role in the Melbourne spring majors. 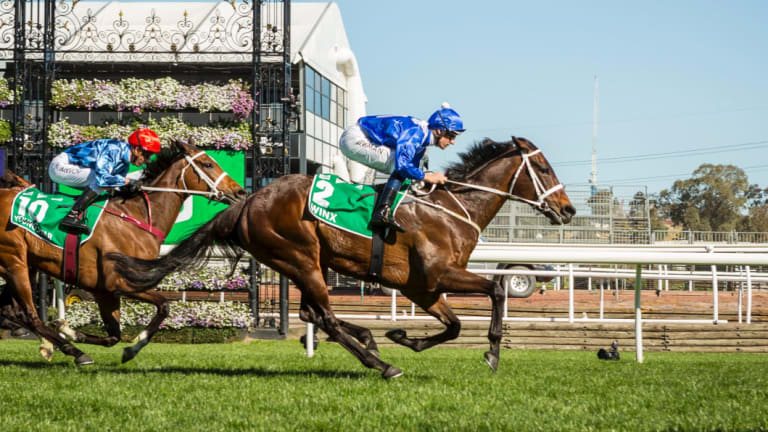 Seeing them on our turf beats reading their records and watching videos. Benbatl raced up to his looks in the race that made its name as the Caulfield Stakes (now the Ladbrokes Stakes) and trainer Saeed bin Suroor, no stranger to group 1 glory, was beaming after the success.

To the eye, it was a different finish, with two visiting jockeys in Pat Cosgrove on Benbatl and James Doyle on Blair House driving their mounts to the line. It lacked the finesse of Kerrin McEvoy and Hugh Bowman but I’m assured that’s a requirement at the end of a tough staying race. The locals behind them, horses not jockeys, lacked the staying power.

And Yucatan, an Aidan O’Brien stayer carrying the Lloyd Williams silks and making his Australian debut, looked a major Melbourne Cup contender in the Herbert Power.

Did I have any regrets missing the spectacular at Royal Randwick? Well, like many there, I also had a hangover. From being in the presence of greatness.

Swedish PM launches inquiry into country's handling of the pandemic WHO pushes to keep ties with 'generous' U.S. despite Trump's exit move
Sport