Lever declares he will be back 'bigger and better'

Melbourne defender Jake Lever has revealed he was shocked to be told he had damaged his anterior cruciate ligament but is determined to return "bigger and better".

Lever hurt himself in an innocuous incident against the Western Bulldogs on Saturday, having slightly pushed off Marcus Bontempelli after the ball was kicked inside the Dogs' attacking 50. 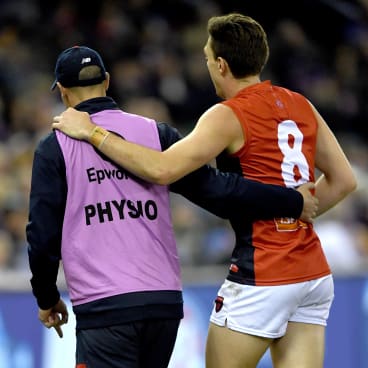 Jake Lever is helped off the ground.

The former Crow will miss the rest of the season and is expected to have surgery on his left knee later this week.

"It was a bit of shock for me. Initially I probably thought I didn't do anything too significant," Lever said.

"I just went to change direction and it kind of hurt and I was a bit shocked when the doctors and physio started testing my ACL in the rooms. When I got the scans you prepare yourself for the worst, but it still hurts when it hits you."

Lever has previously had the same knee reconstructed, having sat out his final year of junior football. However, he does not predict any long-term issues.

"I haven't had any problems in four years. A lot of people (after suffering an ACL injury) have complications with swelling and things like that," he said.

"For me, over the last three to four years, I've had no problems with it, so, for me, it's about doing the rehab properly and taking my time and making sure when I do come back I'm bigger and better than ever."

Teammate Jake Melksham said the Demons had rallied around Lever, who remained in good spirits.

Melksham said Lever's absence would not prompt the Demons to reassess their plans for the year. Sam Frost is one option to partner Oscar McDonald and replace Lever as a key tall inside defensive 50.

The Demons head into the Queen's Birthday clash against Collingwood on Monday in superb form, having won six straight matches for the first time since 2006 – when they last made the finals. Now settled in the top four, the Demons have the chance to forge the double chance come the finals.

Melksham hurt his ankle in the opening term against the Bulldogs but returned to play out the game. He said he expects to be fit to face the Magpies.