The defending champions once again showed their playoff mettle on Sunday with a 57-56 victory over the Queensland Firebirds in a minor semi-final thriller. 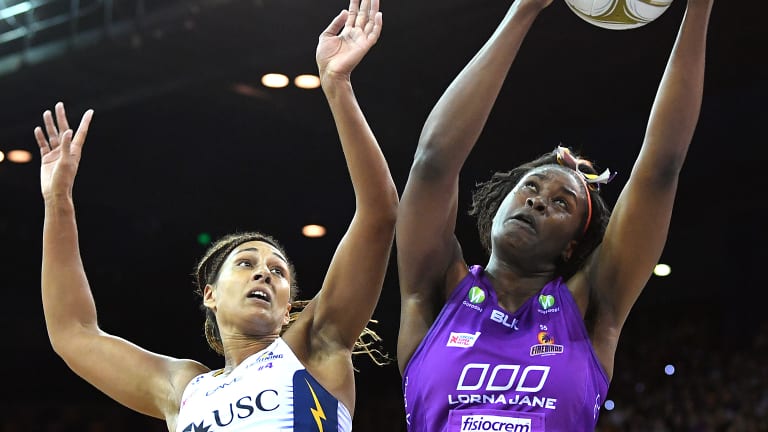 Geva Mentor of the Lightning (left) and Romelda Aiken of the Firebirds during the Super Netball minor semi-final.

It propelled the Lightning to a grand final rematch against the Giants in this weekend's preliminary final at Qudos Bank Arena.

The fledgling teams have developed an intense rivalry in their two seasons in the competition.

Sunshine Coast scored a grand final upset last year, while the Giants have taken the honours this year with a 54-51 opening round home win before a 53-all draw away on June 23.

Mentor said the one-goal victory over the Firebirds, weathering a desperate final-quarter fightback by the home team in Brisbane, showed her side had the hunger to defend its title.

But the English goalkeeper said the Lightning needed to maintain the rage throughout and not ease off like they did after jumping to a seven-goal lead late in the third quarter.

"For us it's about trying to maintain that lead," she said.

"I think we sit back a bit too much and stop attacking the game so that's something we need to address."

Mentor admitted Sunday's clash wasn't their most polished performance but after rising from fifth two weeks ago, the Lightning were building.

We're still looking for our perfect game. Last year we saved it for the grand final and I'd like it to be this year as well.

Sunshine Coast coach Noeline Taurua still rated the torrid derby as one of their best victories and praised the performance of her players.

Taurua predicted another brutal battle against the Giants, who fell 63-57 to West Coast in the major semi-final.

"It's dog-eat-dog and the team that can execute under pressure will do the job," she said.