“I’m old,” she said with a muffled laugh.

The conversation turned to how much longer Vonn would race; the record for career World Cup victories was within her grasp.

“Not long,” Vonn insisted. “This record is not a hill to die on for me.”

On Friday, after another serious knee injury sidelined her again, Vonn, 34, announced her retirement from ski racing.

“My body is screaming at me to STOP, and it’s time for me to listen,” Vonn posted on her Instragram account. She added that she would race twice at the world championships next week in Are, Sweden, but those events would be the last of her career.

“I have accepted that I cannot continue ski racing,” Vonn wrote.

Vonn leaves as the greatest women’s skier in history with her 82 World Cup victories second only to Sweden’s Ingemar Stenmark, who won 86.

Vonn, who became the first American woman to win an Olympic downhill at the 2010 Vancouver Games, also won an unprecedented 20 season-long World Cup discipline and overall titles from 2008 to 2016. Vonn won two Olympic bronze medals (in 2010 and 2018) and seven world championship medals from 2005 to 2017.

Moreover, as a telegenic, marketable sporting personality, she attracted dozens of corporate sponsorships and commercial endorsements, which made her renowned worldwide and led to scores of national media appearances that significantly raised the profile of ski racing in America. With a vast social media following – much of it built on videos she posted of her daunting exercise regimen — Vonn also tried to use her crossover celebrity status to empower women’s athletics. She established a foundation to aid young female skiers while challenging traditional norms in the male-dominated international ski racing federation, her sport’s governing body.

Vonn frequently trained with men and adopted the more aggressive, powerful tactics and techniques employed on the riskier men’s racecourses. She used the stiffer men’s skis and several times over the years attempted to enter men’s World Cup races. And when Vonn was barred from those races, she loudly protested. Her requests to race against men were never granted, but throughout that period Vonn’s quest to compete on the men’s circuit brought new and valued attention to the gains and accomplishments of women’s Alpine racing.

Even Vonn’s personal life made news: For two years beginning in 2013, she dated Tiger Woods, then the world’s most famous athlete.

But on Friday, Vonn said the long list of debilitating injuries she had endured in a daredevil sport had finally caught up with her. She also revealed that she had another, previously undisclosed knee surgery last year.

“My body is broken beyond repair and it isn’t letting me have the final season I dreamed of,” Vonn said.

For much of her career, Vonn became synonymous with high-speed crashes and the injuries that ensued – along with stirring comebacks that she mounted in the aftermath of those mishaps. At the 2006 Turin Olympics, where she was a medal contender in multiple events, Vonn was airlifted off the mountain when she stumbled during a training run at 60 miles an hour, somersaulted until she flew off a jump backward and landed with a chilling thud.

Doctors scanned or X-rayed Vonn’s body from her shoulders to her ankles expecting to discover multiple broken bones but instead found only serious bruises. After a night in a hospital, Vonn competed in four events, although her highest finish was seventh.

Vonn, whose maiden name was Kildow, married Thomas Vonn, a former United States ski team member known for his shrewd use of ski equipment technologies, in 2007. Thomas Vonn became his wife’s manager and primary coach and Vonn blossomed into the most dominant racer in the sport, winning three consecutive World Cup overall titles beginning in 2008. 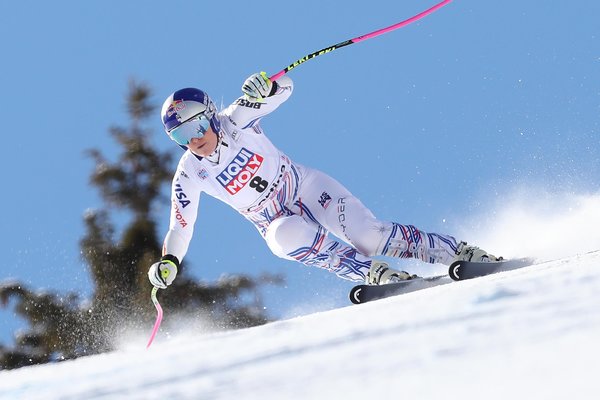 Entering the 2010 Vancouver Olympics, Vonn was the favorite in at least three events until she injured her shin roughly a week before the start of the Games. Several days of weather delays aided her recovery and Vonn dramatically won the downhill with a bold, fearless descent down an especially perilous racecourse. Vonn’s American teammate and longtime rival Julia Mancuso won the silver medal.

At the world championships in March 2013 – her divorce from Thomas Vonn had recently been finalized — Vonn endured another spectacular tumble, tearing two knee ligaments and breaking a bone in her right leg. Screaming as she lay in the snow, Vonn later conceded that she knew she would never again push out of a start gate fully healthy.

Nonetheless, she rushed back from the reconstruction of her knee’s anterior cruciate ligament to prepare for the approaching 2014 Sochi Olympics. Instead, she tore the same ligament in her right knee during training. She tried racing without the ligament but ultimately bowed out of the Olympics a month before they started.

“Those injuries changed the trajectory of my career — changed it forever, basically,” Vonn said in 2018, subconsciously, or consciously, rubbing her right knee as she spoke. “Just devastating. A very dark moment in my career.”

But she rallied to rule the downhill and super-G events as she had before, despite a broken left ankle in 2015 and a broken right arm in 2016 that caused nerve damage so substantial Vonn had to tape her right hand to her ski pole while racing.

“Her willingness to do absolutely anything to keep racing and to keep winning inspired everyone who had to go against her,” said Sophia Goggia, the Olympic gold medalist in the downhill at the 2018 Pyeongchang Olympics. “You always knew she might catch you because no one has done the things Lindsey Vonn has done.”

From late 2014 to the spring of 2018, Vonn won another 23 World Cup races, which put her within four victories of Stenmark’s career record set in 1989 – a mark long considered unassailable.

At the start of this season, most in the ski racing community expected Vonn to surpass Stenmark, and if she did, her racing brethren were prepared to call her the greatest skier ever, without any gender qualifier.

“If she gets the most World Cup wins, it’s 100 percent not about her being female,” Kjetil Jansrud of Norway, who has won seven Olympic and world championship medals, said before the season began. “Lindsey would deserve the greatest title because she has the numbers.”

Each of Stenmark’s victories came in two events, slalom and giant slalom.

“Stenmark raced 14 or 15 events a season and that’s nowhere near what she’s had.”

But Vonn’s quest to catch Stenmark this season was derailed on Nov. 19, 2018, when she toppled during a Colorado training session and tore the lateral collateral ligament in her left knee, which had been her good knee. Vonn missed roughly six weeks of races and multiple opportunities to close the gap on Stenmark, including three races at Lake Louise in Alberta, Canada, where Vonn had won 18 times.

She returned to race on Jan. 18 this year, but struggled to find her form, finishing 15th and ninth in successive downhills and then failed to finish a super-G. She has not raced since.

Seated in the slopeside Colorado condominium late last year, Vonn continued to fidget with the ice bag on her knee, but she insisted she was at peace with her legacy.

“I know it’s time to give up ski racing, but I’m O.K. with that,” she said. “I’ve already done a lot of things that no one else has done. I tried to be good for the sport, tried to advance women’s ski racing and had a lot of days I’ll treasure.

“The sport gave all that to me. So I’m good. It’s been a little unpredictable maybe, but it’s been a great run.”