Dressed in collared jumpers, under overcast skies on a Saturday afternoon against a Victorian opponent, Geelong turned back the clock against North Melbourne with a vintage 37-point win.

Gary Ablett, playing his 200th game in Cats' colours, took centre stage winning 17 disposals in the first half as he took advantage of the clamp being applied on a teammate for once with Ben Jacobs shutting down Joel Selwood.

The champion was masterful throughout, not only using the ball well in tight but applying tackling pressure to turn it over and create chances. 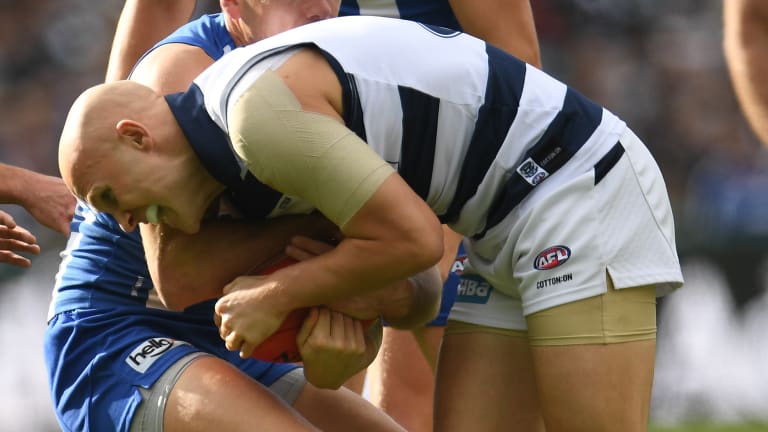 When he found space in the final quarter and kicked a goal on the run from 50 metres out the coronation was complete as he gestured his joy to the rapturous crowd while on both his knees.

With North Melbourne coach Brad Scott putting the tagger back into vogue, his twin brother Chris Scott went one better and pushed the moustached Patrick Dangerfield deep forward early where he was allowed to lead and battle his opponent in one on one duels depending on what the situation demanded.

Dangerfield looked like an actor in a period piece but he played with the strength only the best modern players possess, upsetting the Kangaroos defensive structure as much as anything else.

That move allowed key forward Tom Hawkins to work up the ground where he won possessions in the midfield, and became the fulcrum for the Cats as they moved the ball through the middle of the ground.

Hawkins was outstanding, taking a critical contested mark in the last quarter when the game was tight and using his strength in contested situations when the ball was on the ground.

North Melbourne battled hard but were less efficient with the ball and it cost them dearly.

Mason Wood channelled former North great Arnold Briedis in the opening quarter, unable to convert a goal from three set shots while Ben Brown struggled to overcome Mark Blicavs who was quicker than the Coleman Medal leader and used his leap to bring the ball to ground.

Blicavs was among the Cats' most valuable players and his confidence is growing as he finds his niche in defence.

North Melbourne's forwards had opportunities with Shaun Higgins maintaining the form he has shown all season, winning centre clearances to ensure the inside 50 count was equal at half-time, even if the gap in the free kick count was wider than a a flooded river. 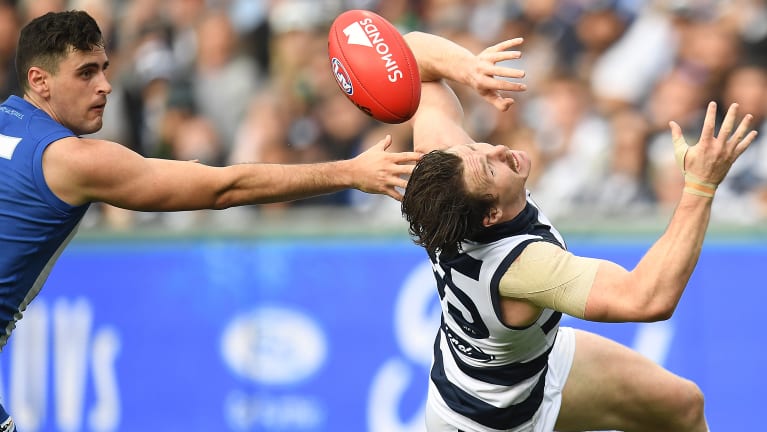 The game changed in the third quarter when North Melbourne hit back around the stoppages, with Ben Cunnington shaking off an uncustomarily quiet first half to win the ball first and put the football in the Kangaroos' front half.

He had 11 touches in the third quarter and dragged his team back into the game, lending the support Higgins craved in the first half.

The clearance dominance had the Cats on the back foot with their defenders having to work hard to restrict scoring and their cause wasn't helped when former Kangaroo Aaron Black hyperextended his knee in just his seventh game in a Cats' jumper.

The umpires confused most at the ground with their decisions but there was little confusion when a 50-metre penalty against Ablett for encroaching the protected zone early in the final quarter gave Todd Goldstein a shot for goal, which he kicked to drag the Kangaroos back within 10 points. 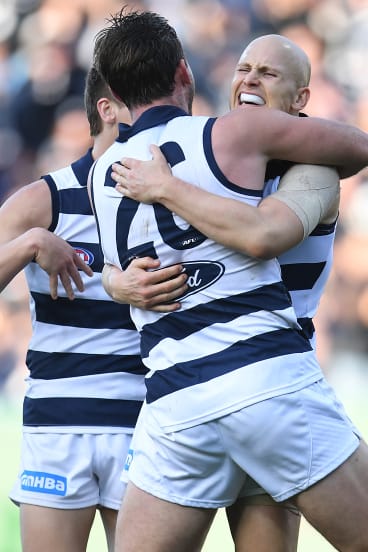 It was, at that point, game on.

With the challenge presented Selwood lifted to win two crucial centre clearances and suddenly the game began to be played in Geelong's half of the ground.

Ablett, who was back to his brilliant best, was superb, finishing the game with 34 disposals and a goal and the Cats ran away to win, in dominant fashion, kicking five unanswered goals to finish the Kangaroos resistance.