When Liz Cambage makes her long-awaited return to the WNBA plenty of familiar Australian faces will be there to greet and then attempt to beat her. 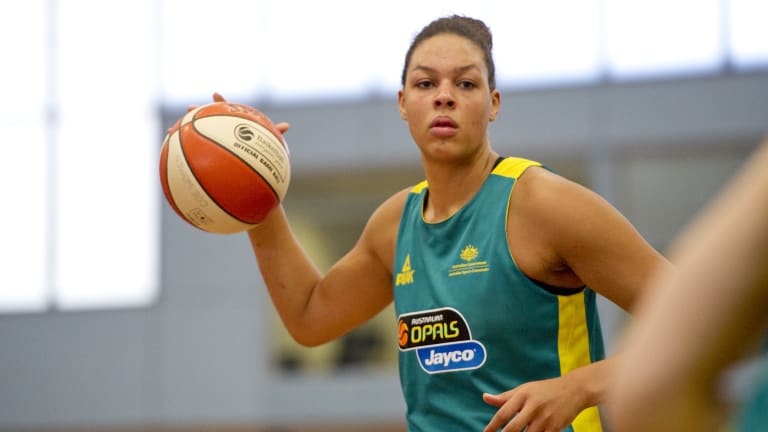 Return to America: Liz Cambage’s debut game for the Dallas Wings is on Saturday morning (AEST).

Cambage's debut game for the Dallas Wings is on Friday (noon Saturday AEST) in Arizona against the Phoenix Mercury, a team helmed by Opals coach Sandy Brondello and featuring Australian team-mates Leilani Mitchell and Stephanie Talbot.

"It's going to be scary," Cambage told AAP on Wednesday.

"Sandy knows me better than any other coach in the league."

Brondello coached the Opals at last month's Commonwealth Games where Cambage infamously lost her cool with the referees and was ejected in the second quarter of the gold medal game.

"I just have to play her straight up," Cambage, who stands 207cm tall, said.

Cambage has had a rocky relationship with the WNBA after Oklahoma's woeful Tulsa Shock drafted the then 19-year-old in 2011 with the number two pick.

She reluctantly joined the team, skipped the 2012 season, returned to play 20 games in 2013 and has since avoided the WNBA with stints in China and Australia's WNBL.

The Shock relocated to Dallas last year and one of the team's top priorities was to entice Cambage.

Cambage views Dallas as perfect preparation for Australia's attempt to win the gold medal at September's World Cup in Spain.

"I'm here because I want to better my game, especially heading into world champs," Cambage said.

"I want to go in there as strong as possible."

Cambage is a paleo diet devotee after first trying it four years ago and shedding 25 per cent of her body fat "straight away".

Texas is not known for its healthy food, but Cambage has not been tempted and is sticking to her current favourite home-cooked roasted brussel sprouts with bacon and balsamic vinegar.

It was a different story when she was a teenager playing on the Bulleen Boomers in the WNBL.

"We were sponsored by the Pancake Parlour and I was in there after every training session having a chocolate thick shake, getting pancakes with ice cream and chocolate sauce, maybe a Cajun chicken salad on the side," she laughed.

"We would smash that.

"They were the days when I had that 19-year-old metabolism."